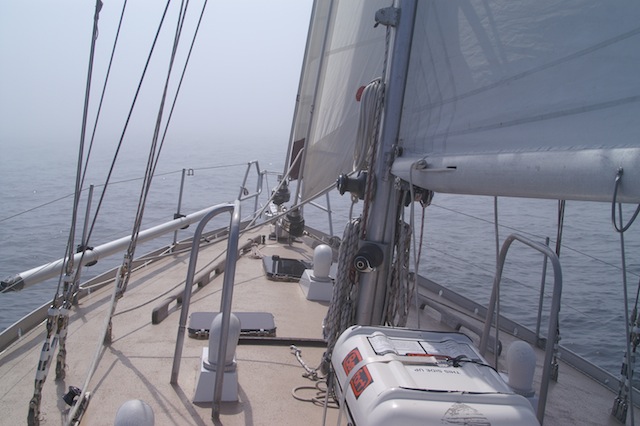 We had a fine July 4th weekend aboard Lunacy, and sailed from Portland over to Popham Beach, at the mouth of the Kennebec River, to visit friends. Conditions, however, were pretty light. Sailing both west and then east back and forth across Casco Bay, we ended up mostly close-reaching in less than 10 knots of wind. These were perfect conditions for the new headsail I want to fly from Lunacy‘s new bowsprit. Except, of course, said sail does not exist yet. Fortunately, I had already scheduled a meeting with sailmaker Doug Pope to see about remedying this situation.

I met with Doug aboard Lunacy yesterday and together we scoped out the new sail’s particulars. At least I know what I want: a large flat-cut lightweight headsail that furls on its own luff and can fly at apparent wind angles between 45 to 130 degrees. What I don’t know is exactly what to call such a sail.

A lot of people today reflexively refer to a sail like this as a “Code 0.” I’ve often used the term myself, even while wondering what the hell it means. As Doug explained it to me yesterday, a true Code 0 is essentially an upwind spinnaker, which, of course, seems a bit oxymoronic. To rate as a spinnaker under most modern racing rules, a sail’s midgirth must measure as at least 75 percent of the length of its foot. This means carrying some positive area in both the luff and leech of the sail. You wouldn’t normally try to sail upwind with a sail like this (unless you were trying to subvert a racing rule). Indeed, Doug tells me that the luff of a true Code 0 will fold in on itself when sailing at tight wind angles, which obviously is less than ideal.

I know for sure I want a sail with a straight luff. Besides being more aerodynamic upwind, it will furl much more neatly. My new sail also needs a sunstrip on the leech, as I expect I will sometimes leave it hoisted and furled for extended periods while cruising in light conditions, or on long passages.

The sail we conceived in the end, with a straight luff and a somewhat high-cut clew, Doug and I both called a jibtop. Which takes us into another mysterious realm of modern headsail nomenclature.

Historically, a jib topsail, or flying jib, was a sail flown forward of and above all other jibs in the foretriangle of a classic gaff- or square-rigged vessel. 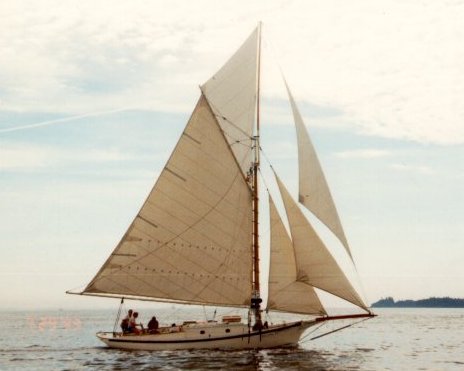 More recently, racing types have used the term “jibtop” to describe a large overlapping headsail that has a slightly fuller cut and a higher clew than a traditional genoa. The idea being that a jibtop will set better than a genoa at more open reaching angles, as the higher clew will keep the head of the sail from twisting off too easily. 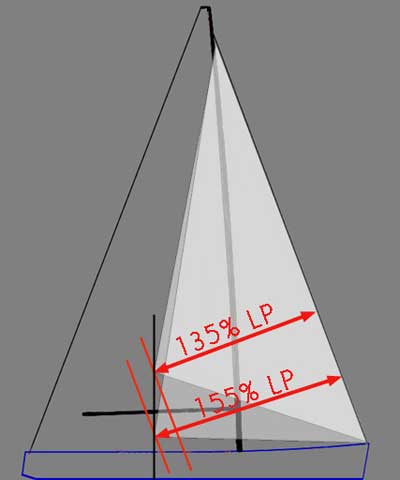 This sounds good to me, except I’d like my jibtop cut as flat as possible, as I really would like to go upwind with it as efficiently as I can. Another nice thing about a high-cut clew, again, is that the sail will furl more neatly. You also needn’t worry as much about shifting the sheet lead as you bear away. But I don’t think I want my clew too high… as it would be a shame to give away too much sail area. 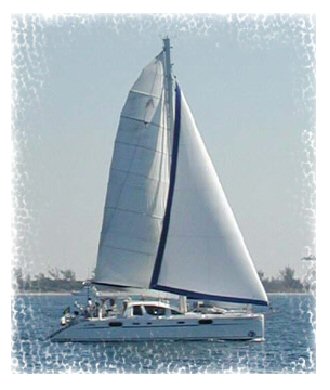 In the end, Doug said he expected the sail he builds for me will be pretty similar to the screechers he builds for Maine Cat catamarans. “Screecher,” of course, is a term normally used only in reference to a large headsail that furls on its own luff and is flown from a bowsprit on a catamaran. Personally, I rather like the sound of it. So I’m thinking I’ll call my new sail a screecher, just to help confuse everyone all the more.

In Other Developments: During our July 4th cruise, I found either all the batteries onboard have suddenly crashed for no apparent reason OR the battery monitor has lost its mind.

After meeting with Doug I took Lunacy back over to MYC to see if they could sort this out for me before next weekend. Hopefully they’ll just find a corroded sensor wire somewhere. Do me a favor and keep your fingers crossed, as I don’t really want to contemplate the alternatives.