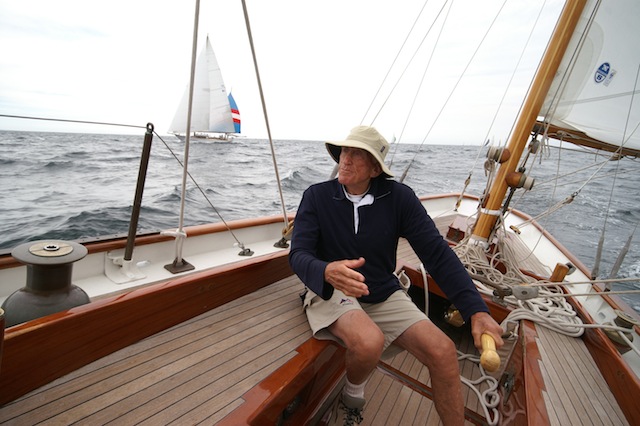 I only met Edgar Cato once and spent but one day sailing with him, back in the summer of 2007, but he made a large impression on me. It helped, of course, that the boat we sailed on was Dorade, the famous 52-foot yawl that Olin Stephens first made his reputation with way back in 1929.

But it wasn’t just the boat. Cato himself was the nicest, most unassuming extremely rich guy I ever spent time on a boat with, a true gentleman in every sense of the word. It hardly came as a surprise, given his age (86), but I was truly saddened when I learned yesterday that he died last week (on June 21) at his home in South Carolina.

Cato was a very active sailor and owned several boats, several of which he named Hissar. These included the fiberglass Kiwi-built 12 Meter, KZ 5, in which he twice won the 12 Meter World Championship. He was also an avid horseman and loved to fly vintage airplanes.

He purchased Dorade in Italy in 2006 and soon discovered she was not as shipshape as he thought.

“This is where all our troubles began,” he told me with a wry smile as I helped to hoist Dorade‘s mizzen spinnaker during the NYYC Squadron Run race we sailed together on Penobscot Bay. And he told me of racing the boat with Olin Stephens aboard soon after he brought her back to the States. In winds gusting to 30 knots, Stephens, age 98 at the time, had urged a rapid hoisting of the mizzen spinnaker, whereupon the top of the mizzenmast promptly carried away.

“He was very apologetic,” Cato said. “Then we did a thorough survey while we were getting the mizzen rebuilt and we found the boat had all sorts of problems.”

In spite of the fact that Dorade had supposedly had a complete refit in Italy nine years earlier, Cato had to immediately pour a fortune into her just months after buying her. The boat’s entire interior was removed, 35 pairs of steam-bent frames were replaced, all planking below the waterline was removed and half of it replaced, most floor timbers were replaced, most of the hull was refastened, the mast step and forefoot were refastened, and all plumbing and electrical systems were replaced. Last but not least, in an effort to restore the boat to near-original condition, her engine was removed and the prop aperture in her keel and rudder was filled in.

Still, Cato had no complaints. He saw himself not as the boat’s owner, but as her custodian, and he felt an affirmative obligation to maintain her as best he could. 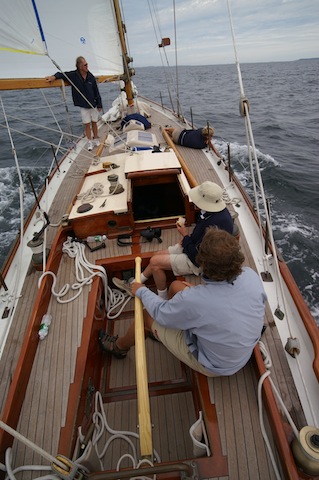 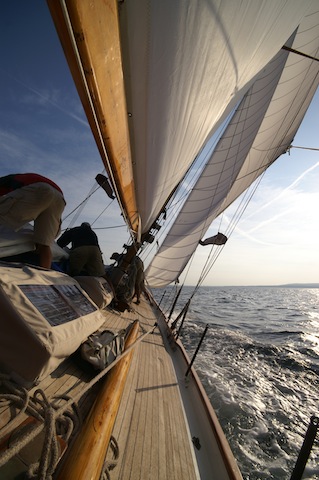 We had a fantastic sail that day. Never mind that we did well in the race (second over the line and second on corrected time). The boat–and the company–were sublime, and the crew shirt I earned is still my favorite.

All thanks to Edgar Cato.

He will be missed by many in the sailing community.

Return of the Native (Some background on Dorade)

Conceived by Olin Stephens in 1929 when he was little more than 20 years old, Dorade revolutionized yacht design and took the ocean-racing world by storm when she finished the 1931 Transatlantic Race from Rhode Island to England more than two days ahead of a field of several larger boats. She won the Fastnet Race that same summer and again two years later. In 1935, however, Olin and his brother Rod, overwhelmed with all the new work Dorade’s success had brought them, elected to sell the boat to James Flood of San Francisco.

Dorade spent several decades on the West Coast and was just as successful there as she had been on the East Coast. With Myron Spaulding as her skipper, she won the 1936 Transpac and later, under different ownership, scored six Swiftsure victories during the 1940s. She also underwent several changes. Her first engine was installed in 1941, and at some point her tiller was removed in favor of a wheel. During the 1940s and the 1980s her mizzen was removed and she was sailed as a sloop. Also for a time she had a bowsprit, which, coincidentally, was how Olin Stephens sailed her during her very first season in 1930.

By the 1990s Dorade had landed in Puget Sound and was in deteriorating condition when purchased in 1996 by Italian entrepreneur Giuseppe Gazzoni Frascara. After a refit and a full decade racing on the active classic regatta circuit in the Med, Dorade finally returned home to the U.S. East Coast for the first time in over 70 years when Cato purchased her. Ironically, according to Paul Buttrose, who managed the boat for Cato, in order to do this the old girl first had to evade Italian laws regulating the export of antiques. In describing to me his battle with the Euro-bureaucracy, Buttrose noted with a smile: “In the end I managed to convince them we were taking her back where she belonged.”

0Shares
Previous PostDOWNWIND ADVANTAGE: The New Nose in ActionNext PostNEW HEADSAIL: Code 0 or a Jibtop or a Screecher?