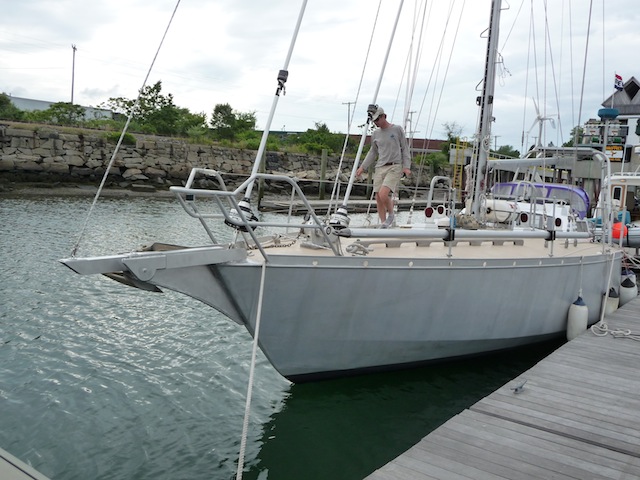 After several delays the crew at Maine Yacht Center finally splashed Lunacy last Thursday. I then spent much of Friday and Saturday getting her ready to sail. Of course, I was very curious to see how she looks afloat with her new nose and was struck by how the angle of the deck’s sheer line and that of the sprit seem a bit incongruent. When the boat was out of the water the sheer and sprit seemed to run on a single line, with the former flowing smoothly into the latter.

A minor aesthetic quibble, to be sure. On the whole I was pleased. I was also anxious to go sailing, which was accomplished Sunday, with all the family in tow.

In retrospect I can only laugh at all that went wrong:

1. While pumping air into the dinghy (it’s over 10 years old), the valve for the keel tube under the floor popped out. So I was unable to inflate this small, but very useful compartment (it does make a big difference in how the little boat tracks while underway).

2. After installing the dinghy’s outboard engine and starting it up, I found its throttle control is broken. We can now run the dinghy only at full speed, which makes for very exciting start-ups and landings.

3. After I tied the dinghy off to Lunacy‘s stern, as I was jumping down from Lunacy‘s deck to the dock, my fanny pack popped off my waist and fell into the water, thus drowning both my wallet and cellphone. Fortunately, I retrieved the pack almost instantly and no real harm was done.

(The cellphone in question, I should note, is an old, but incredibly durable–and water resistant–Casio G’zOne Type V, which has already lasted about four times longer than any other phone I’ve ever owned, despite routine abuse.)

I thought now, having suffered three accidental misfortunes in rapid succession that I had fulfilled my quota for the day, but no… next came the self-inflicted wounds:

4. While preparing to take Lunacy out of the slip she’d been left in at MYC, my wife Clare and I had a disagreement about how to get clear of the dock. It looked straightforward to me, and I was certain we could manage ourselves. But Clare thought we should ask the nice looking gentleman working on his boat two slips down to come cast off our lines. I, of course, played the old “who knows better, me or you?” card and insisted on doing it my way.

So… I hopped down on the dock and first undid the two spring lines and put them aboard. Then I cast off the windward bow line and threw it aboard. I quickly hustled to the stern, cast off that line, and threw it aboard. Then I clambered aboard myself and put the boat hard astern with the rudder over to get us clear of the slip with the stern turned in the right direction for a tidy exit.

Suddenly, I noticed the nice man from two slips down was running in our direction.

“You forgot a line!” he shouted.

Insert dope-slap. The leeward bow line was still tied to the dock. Almost immediately, this had an undesirable effect on our progress. Fortunately, the nice man was also very quick, and he managed to get the line free in an instant, tossing it as best he could after our departing bow.

Fortunately, too, our course astern was only slightly skewed and we managed to get clear without hitting anything.

Clare, I must admit, was restrained in her reaction to all this.

5. The denouement! We powered out of the marina in an orderly fashion, then put away our lines and fenders as we headed out the channel into open water. All seemed shipshape, and I was just turning my mind to the task of getting some sail up, when suddenly the engine went… ker-chunk… and stopped.

My first thought was that we must have run over a lobster pot. More immediately, I was interested in deploying some sail. I was disappointed to find that the action on the brand-new Furlex headsail furler was a bit stiff, but it took only a little coaxing to get the jib to unroll. Fortunately, there was enough wind to sail the boat under this alone.

Once we were clear of traffic (and lobster pots), I popped on the autopilot and turned my attention to the engine. I checked all vital fluids and orifices, then tried the ignition. She started right up, which seemed to confirm my suspicion about having a line in the prop. I eased the gear lever into reverse, hoping to unwrap the line, but… ker-chunk… it only stopped again. I tried to ease the lever back into neutral, but now it was stuck fast.

We spent the next hour or so sailing under jib alone to an unfrequented bit of shallow water where we could drop anchor without deploying too much chain. Going forward to prep the anchor, I immediately discovered what line was wrapped around the prop.

It was, of course, the one I’d forgotten to untie back at the dock.

I learned a long time ago that it is wise to carry a wetsuit when sailing on the coast of Maine. The girls, I think, very much enjoyed watching me wriggle into mine. And once I was underwater, I was relieved to see that the line wasn’t badly wrapped at all. I easily unwound it by hand and was soon back aboard. The gear lever, most fortunately, slid right back into neutral when prodded, and the engine, again, fired up the instant I punched the ignition button.

We spent the rest of the afternoon sailing down to Portland Harbor, where we put Lunacy on her mooring at Portland Yacht Services.

I’m very sorry I forgot to bring the camera along so as to illustrate all of the above. Instead I’ll share these pix of some the winter’s improvements: 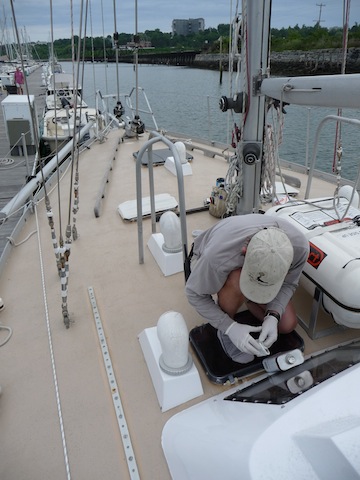 The newly painted deck. We applied Durabak, an industrial-strength polyurethane coating normally used on things like truck beds and factory floors. It’s not too pretty, but I’m hoping it will stand up to some serious abuse and will stick to the deck for a long time. The non-skid particles in it are extremely aggressive. Where before it was a bit dangerous to work on deck in bare feet, because it was a little too slippery, it is now a wee bit painful. Fortunately, the girls (so far) don’t seem to have noticed this. 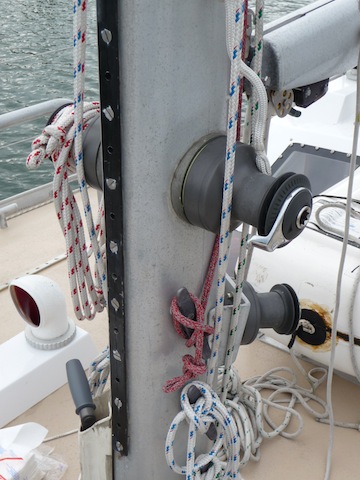 New Lewmar winches on the mast. The old Enkes winches, which I loathed, because they were so hard to service, can now be used as door-stops.

Or I’d be happy to give them away free to any loyal WaveTrain riders! 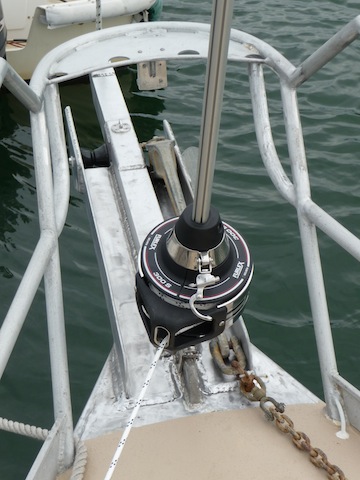 The new furler, installed. As mentioned, it was a bit stiff when the sail was unrolling, though it worked fine when I rolled the sail back up again. This is probably because I left too much line on the drum. Also, when raising the sail on Saturday, I found it was hard to hoist, which may mean the luff tape is a wee bit too fat. 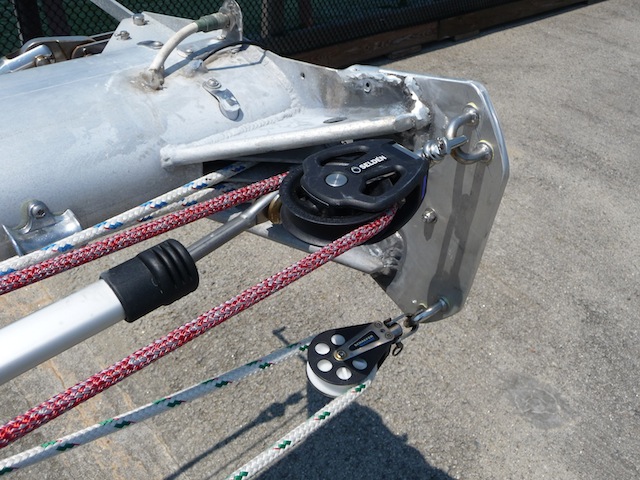 The new masthead, with a super-beefy block and a high-modulus halyard for flying a new loose-luffed light-air headsail (which does not yet exist). After much debate, we welded on a big plate to get the block two inches further out from the mast, so that–hopefully–I can fly the new sail on a continuous-line furler (yet to be obtained), on both tacks, without fouling the furled jib.

With the rig up, I now see there’s plenty of clearance up there, so I am hopeful this will work as planned.