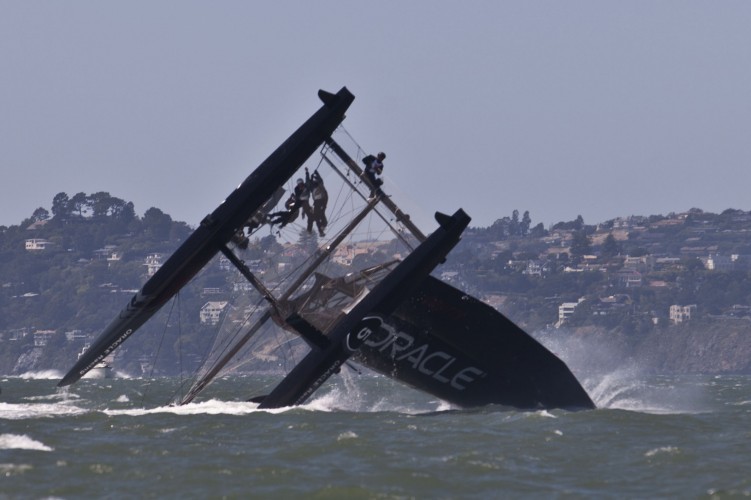 I’ve posted barely a syllable about the America’s Cup since Larry The Oracle wrested the Auld Cup from the clutches of Ernie The Alinghi back in February of last year. Since then Larry has certainly not followed all my advice regarding the fate of the Cup (1. sail again in 90-foot multihulls; 2) have it in San Francisco; 3) appoint an independent trustee), but he has heeded much of it. We got a nice taste of the mayhem to come when Russell Coutts and James Spithill started showing off their two little training boats on SF Bay last week. First Coutts nearly crashed his boat last Friday (see video here). Then yesterday he crashed for real (in this video here) in front of a big gaggle of journalists.

Coutts is the one falling about 30 feet straight through the wingsail into the water.

Surely I’m not the only who thinks that he must have done this on purpose. After all, when was the last time an America’s Cup test sail got covered by CNN?

That Coutts is a clever one. He knows people don’t go to car races to watch guys driving around in circles. They go to see them run into things. Just like they go to hockey games to see guys fight (go Bruins!), etc. etc. etc. Violent action is what sports fans crave, and it seems certain this edition of the America’s Cup will be serving up a fair dose of it.

The dynamic should be interesting in other respects. We’ll see monohull match racers (like Coutts) learning to sail high-powered multihulls, and we’ll see high-powered multihull sailors learning to match race. The guys I have my eye on are the brothers Peyron (Loick and Bruno) on Energy Team France. If they get the money to mount a real campaign, they will be a force to be reckoned with. If they actually win the Cup and take it to France, the next go-round will be HUGE.

The first round of competition in the small AC45 training boats starts in August in Cascais, Portugal. Then in July of next year they move up to the big 72-foot machines. The final showdown on the windy waters of SF Bay is currently set for the summer of 2013. 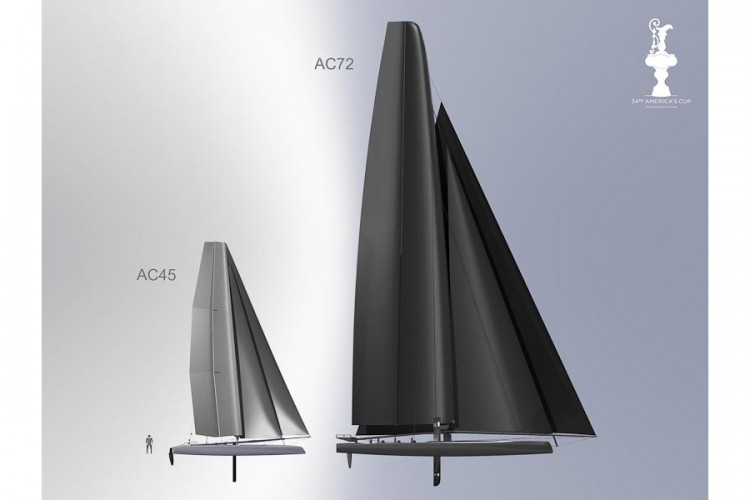 I’d be lying if I didn’t tell you I’m looking forward to seeing lots more crashes. I swear I’ve already watched that video of Coutts falling through the sail about 50 times.

PS: The photo up top is by Gilles Martin-Raget. For some reason the caption feature won’t work for that one!