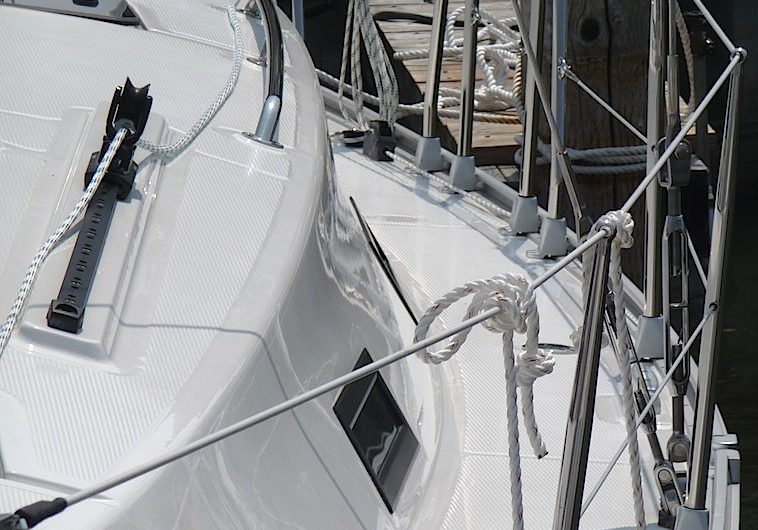 I spent Friday of last week down in Annapolis meeting with some folks from Farr Yacht Design and the newly formed Bavaria Yachts USA, which is seeking to reinject the Bavaria brand into the American market. SAIL senior editor Adam Cort and I got a good look at four of the boats in Bavaria’s new “Cruiser” line and attempted to sail three of them in little to no wind on Chesapeake Bay. All the new boats share a distinctive design feature, a pronounced kink in the cabin side, which is known inside Bavaria as the “knik” (pronounced “ka-nick”). The term is the fruit, we were told, of a typographical error gone viral.

What the knik represents, of course, is an attempt to introduce some stylistic flair into the beamy, bulky wad of fiberglass that is the modern mass-production cruising boat. Is it possible to cram maximum volume into the interior of a boat and have the exterior still look attractive? Tis a problem that bedevils most mass-production builders these days. In this case, Bavaria hired BMW Group DesignworksUSA to try to solve the riddle. (BMW styled the Cruiser line decks; Farr did the hulls and all the structural work.) I leave it to you to decide if they succeeded or not: 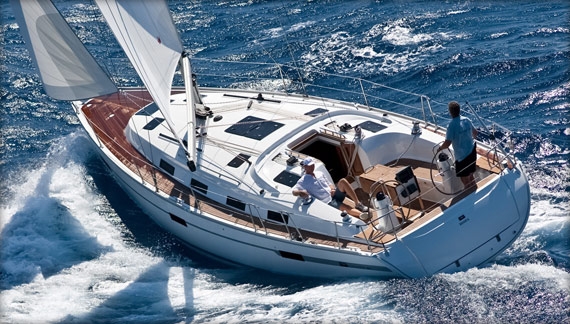 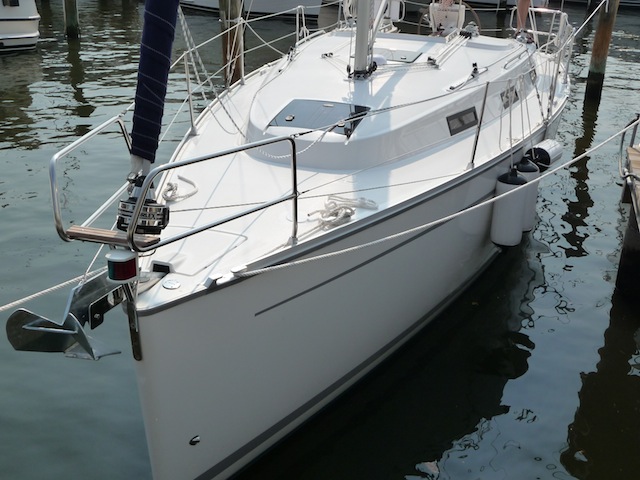 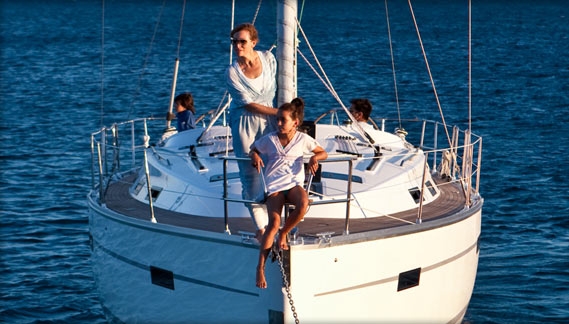 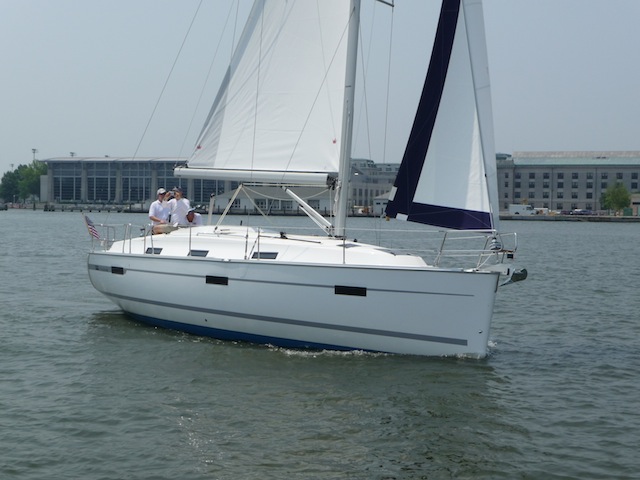 Another characteristic shared by all boats in the Cruiser line is that the helms are pushed right aft, and instead of sugar-scoop transoms, each boat has a bluff fold-down transom. This helps maximize interior volume while also preserving easy access to the water at the rear of the boat, a feature that many modern cruisers have come to take for granted. 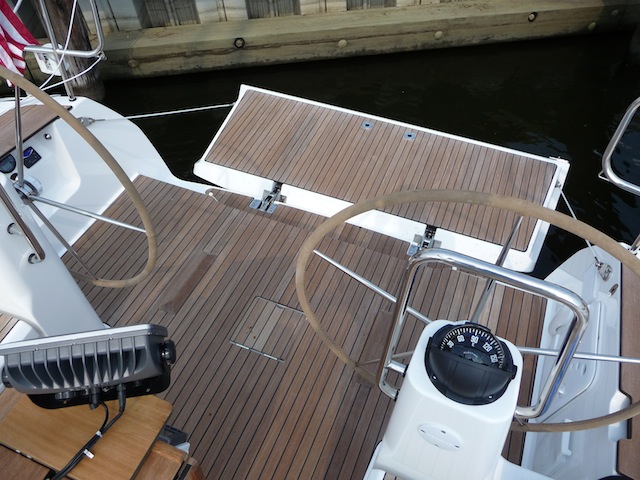 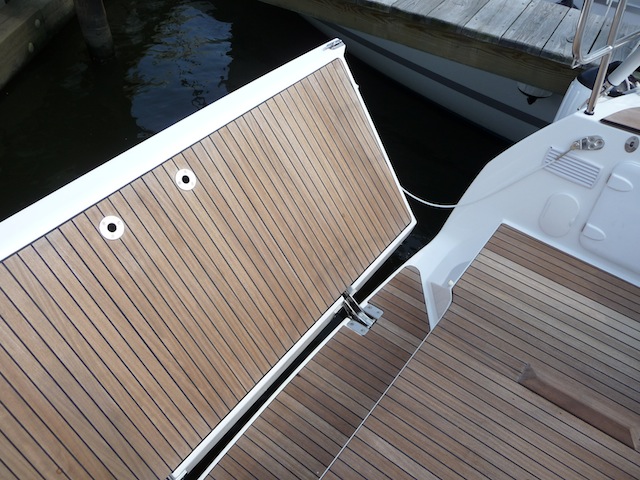 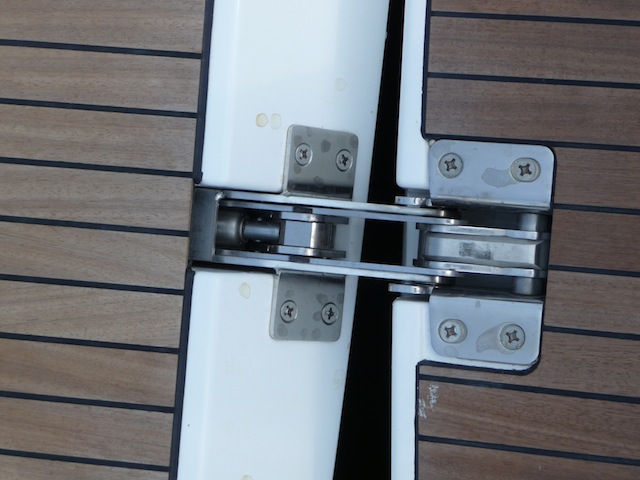 Fold-down transoms are not unique to Bavaria, but they have done a very good job of engineering the mechanism on their boats. The transoms are controlled by strong hydraulic hinges that can hold the swim platform in place at any oblique angle. When opening the transom, resistance is effectively increased, making it impossible for the platform to just fall down with a crash. Instead you must use positive pressure to push it all the way down until it is flat. When pulling the platform back up, the hinge decreases resistance and makes it much easier to manage the weight.

Unfortunately, Adam and I didn’t learn too much about how the boats sail. We did establish that all three of the boats we were aboard–the 32, 36, and 40–are in fact capable of moving under roller-furling mainsails and non-overlapping jibs in winds blowing between 4 to 6 knots.

Back in March, after my charter junket in Grenada, I did have a chance to test-sail a new Cruiser 45 in strong tradewind conditions and was very impressed with its performance. (Look for a more detailed review in the August issue of SAIL.) One thing that helps the 45 sail well in a strong breeze are its twin rudders. More and more I’m becoming convinced that these are a key feature to have on these modern super-wide boats.

In Bavaria’s new Cruiser line, twin rudders are found on the larger boats (the 45, 50, and 55), but not on the smaller ones (the 32, 36, and 40). So I look forward to seeing how the single-rudder boats handle in more-than-whispery breezes at some point in the future.