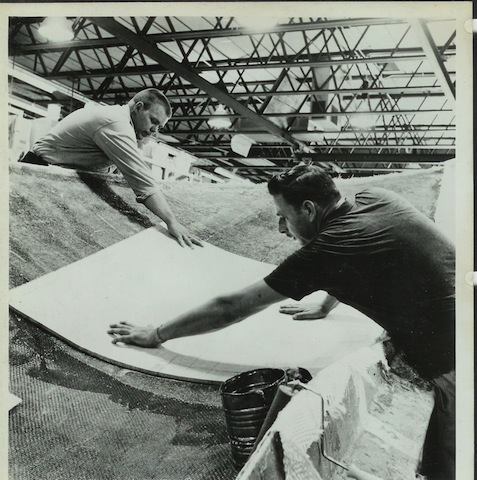 So far in our exploration of fiberglass boatbuilding, we’ve only discussed how to create a solid glass laminate. Very few boats, however, are made entirely of solid glass. Most also contain some cored laminate, as this is the most effective way to decrease weight in a fiberglass boat while also increasing its strength.

Cored decks have been standard since the earliest days of fiberglass boat production; they help decrease weight well above the waterline and also eliminate the need for beams to help support the deck from below, thus increasing accommodations space. Cored hulls, meanwhile, are also quite common, particularly on performance cruising boats and racing boats.

The principle is similar to that of an I-beam girder. Two sections oriented in one direction are separated by a third lighter section oriented at a right angle to the first two. In theory, this is the ideal way to dramatically increase thickness and stiffness while not increasing weight. Except in a cored boat laminate, unlike an I-beam, which is 100% steel, we are (again) creating a composite structure, as the internal core is made of a different substance than the external skins. This is often referred to as a sandwich construction, for obvious reasons.

Depending on how thick the core of the sandwich is, the outer skins can be quite thin indeed. On a boat, however, there are practical limits, as the skins must at least be thick enough to resist ordinary impacts. As a general rule, as the lightweight core gets thicker, the relatively heavy skins can get thinner, and the whole structure gets stiffer and lighter. The larger the structure, the greater the weight savings relative to a solid structure of similar size and strength. For boat hulls the practical minimum limit is about 30 feet. On any boat shorter than this, the skin thickness needed to resist impacts is so great relative to the core’s thickness that there is no appreciable weight savings.

Another great benefit of cored hull laminate is that it provides great insulation. If you have ever cruised in cooler climates aboard a solid glass boat in the early spring or late fall and have awoken to rivers of condensation pouring off the overhead, you will appreciate the importance of this. A cored hull is always drier than a solid hull and is less likely to become a mildew farm. It is also warmer when it’s cold outside, cooler when it’s warm outside, and quieter as well.

Cored laminates do have some disadvantages and are in certain ways more fragile than solid laminates. There is no way to create a chemical bond between a core and its skins; instead the bond must be primarily adhesive. The best methods are either to lay up the core between two resin-rich layers of chopped-strand mat or glue the core in place with a resin-based adhesive putty. But even when a cored laminate is laid down with scrupulous care, it is more likely to delaminate than a solid one, particularly after suffering impact damage, whether the outer skin is punctured or not. In such cases, though there may only be a small area where damage is visible, the core will likely have separated from its exterior skin over a much larger area. Furthermore, the extent of delamination, however it occurs, can be difficult to ascertain if the core remains in close contact with its skin, as is often the case.

Cored laminates are also more susceptible to water damage. Any underwater core will eventually be invaded by some small amount of moisture migrating through its exterior laminar skin. Any puncture in the outer skin, no matter how small, will also readily admit moisture. If the puncture is underwater, even the speediest repair cannot prevent some saturation from taking place. This is why some builders insist on building only solid hulls and others will core a hull above the waterline, but never below it. Many cruisers believe no serious cruising boat should ever have cored laminate below its waterline; others believe a lighter hull is worth the risk of having to make more expensive repairs after a collision.

In addition to the threat of impact damage, cored decks are susceptible to water intrusion anywhere a fastener pierces their surface. On most boats there are dozens (or even hundreds) of such penetrations, and it is rare to find an elderly deck on a glass boat that is not a bit soggy somewhere, if not completely saturated. It is therefore common for older fiberglass boats to have had all or part of their decks recored at some point. This is a difficult, expensive job, and you do not want to be the owner of the boat in question when it needs doing.

When water does penetrate a core, it theoretically should not travel far, as any reasonable core material will be a closed-cell substance that does not allow water to migrate through it. In practice, however, water in a core often migrates long distances. The primary culprits here are small grooves or notches called kerfs that are scored into the body of a core in a grid pattern and enable it to conform itself to curved surfaces. Anywhere the core meets a curve its kerfs must spread open to accommodate it and so create an easy channel for water to travel through. Even in areas where the kerfs are closed tight, the tiny slits they present are much more permeable than the core material itself. As a result, even if water enters a core at only a few discrete locations, the entire core may become thoroughly saturated. Drill a hole in a hull like this, and the water literally comes shooting out.

The only way to prevent this is to make sure kerfs are filled with resin or putty during lamination. When laminating by hand this can be difficult to achieve. Prior to layup, the core can be draped over some appropriately shaped object section by section, and resin can be sprayed into the opened-up kerfs (this is known as hot-coating a core), but this is labor intensive. Many builders do it only in a cursory manner, if they bother at all. It is also necessary to apply pressure to the core after it is set in place so as to drive resin or putty as far up into the kerfs as possible. In a hand layup, this is usually done by laying weights all over the core–an inexact method at best. No matter how carefully the work is performed, there will still likely be some areas where the kerfs are not completely filled.

In the end, the only truly effective method of laying up a core is with resin infusion and a vacuum bag. This way pressure is evenly applied over the entire core and resin is sucked up into all the kerfs. The strength of the bond between the core and skins is also maximized. It is an overstatement to say that cores laid up by hand must be deficient, but you should consider them to be somewhat suspect. This is less true of deck cores, as decks are normally pretty flat and core can be laid down straight, without any kerfs, thus reducing the potential for moisture migration. With hand-laid hull core, however, it is best to be skeptical.

Balsa wood has long been the most commonly used core material. It is light, inexpensive, and stiff when loads are imposed along its grain (though it is soft and weak, as any model airplane buff will tell you, when loaded across its grain). Oriented in end-grain fashion, with its grain perpendicular to its laminar skins, a balsa core is structurally very efficient. Balsa also has the highest shear strength of any core material, meaning it most strongly resists being separated from its skins. It is heat resistant as well, much more so than any resin it is apt to be paired with in a fiberglass laminate.

End-grain balsa is technically a closed-cell material, but in my experience it does seem to have a tendency to spread moisture through itself. It is also supposedly just as strong wet as it is dry, but if you have ever opened up an old soggy balsa-core deck, you will not believe this. Also, though balsa is reasonably impact resistant (if an impact is received in the direction of its grain), it will not regain its shape once it is crushed.

Before it is laid down in a laminate a balsa core must first be wet out with resin. Otherwise the balsa wood, which is absorbent, will suck resin out of the laminate surrounding it. Any resin-starved patches created as a result are likely to delaminate in short order. In the early days, there were several dramatic failures of this sort and balsa core consequently for many years had a bad reputation it did not deserve.

Another type of wood that was sometimes used as deck core in older glass boats is plywood. As a rule, it is best to avoid these. Because it is a laminar material with much of its strength oriented laterally, like the laminate around it, plywood is not structurally efficient. Plywood does resist compression well, but is also heavy compared to other core materials. Worst of all, because of its laminar structure, moisture spreads through it quickly.

After balsa wood, plastic foam is the next most commonly used core material. There are different varieties, but they are all isotropic, meaning they are strong in all directions, rather than in just one direction. Some of foam’s strength is therefore wasted in a laminate. Though not as structurally efficient, it is lighter than balsa, but is not nearly as heat resistant. It is more likely to regain its shape after being crushed and is also more nearly a 100% closed-cell substance and so better resists water migration. It is generally more expensive than balsa, too.

Most foam cores are made of polyvinyl chloride (PVC). These include Airex, a linear PVC foam that is resilient and easily springs back into shape after being crushed. Divinycell and Klegecell, which are cross-linked PVC foams, are less expensive and lighter, but are more likely to crack when crushed. The most expensive commonly used foam is Core-Cell, which is a styrene acrylonitrile (SAN) foam, and is reputed to be more impact resistant than its competitors.

The most exotic lightweight cores have a honeycomb structure and are made of various materials, including paper, aluminum, and plastic. Honeycomb cores are extremely stiff for their weight and, like balsa wood, are structurally efficient. The big problem with such cores is that their exterior lateral surface area is severely reduced. There is minimal contact between the body of the core and its laminar skins, which makes it difficult to achieve a strong bond. Vacuum bagging with epoxy resin is practically mandatory; as a result, this sort of construction is very expensive.

Honeycomb cores are increasingly used in interior bulkheads and furniture installations in both race boats and high-end cruising boats. The weight savings are tremendous: a honeycomb bulkhead weighs as little as 2 pounds per square foot, compared to a conventional plywood bulkhead, which weighs nearly 5 pounds per square foot. And when finished with thin hardwood veneers, honeycomb components can look very traditional. The material most commonly used is paper, though plastic is popular as well.

Honeycomb hull core, meanwhile, is found only on the most cutting-edge race boats. Usually the skins are carbon fiber rather than fiberglass. The core material is most often aluminum and sometimes plastic. Hulls like this are incredibly light and stiff and represent the state of the art in modern yacht construction, but they are engineered to fine tolerances and are prone to delamination and other dramatic failures. Such construction therefore is not normally appropriate for a cruising boat.