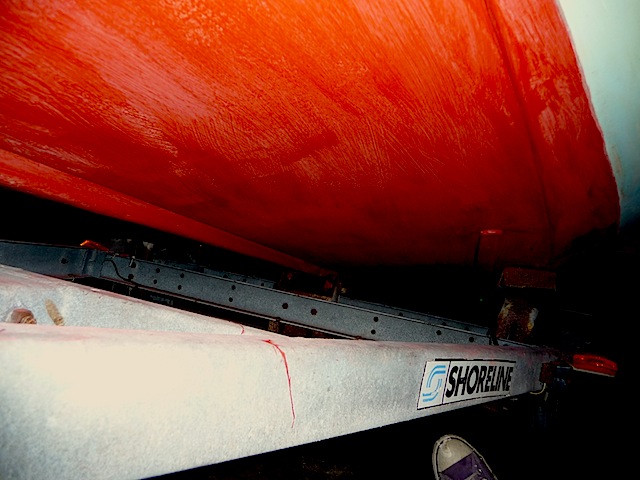 After gloating last week over how I needn’t put any bottom paint on Lunacy this spring, it was only fitting that I should spend a good part of this past weekend messing around with bottom paint. Not painting Lunacy, but Mimi, our little Drascombe Dabber that we use for exploring the local backwaters here in Portsmouth, New Hampshire.

Now my body is all sore from crawling around under Mimi‘s trailer with a paintbrush clenched in my teeth. My eyes are smarting from the toxic dust unleashed during the prep work. My hands and face are speckled red with blotches of poisonous copper paint.

Such are the joys (and hazards) of boat maintenance. But now the awful job is done, and I look forward to splashing my little girl sometime in the coming week and to puttering about in her during the summer to come.

Mimi is the first Drascombe I’ve actually owned, but she’s not the first I’ve had a relationship with. During summers spent in Maine while growing up I had access first to a Drascombe Longboat (21 feet long) that belonged to my grandparents, then later to a Drascombe Lugger (18 feet long) that belonged to an uncle. I used them mostly for day-sailing, but did do a bit of coastal cruising in the Lugger. It was an open boat (the Longboat at least had a tiny cuddy cabin), and at night I just slept on a loose slab of foam under a blanket on the cockpit floor.

If this seems a bit primitive, I urge you to consider Webb Chiles, who sailed most of the way around the world singlehanded in an open Drascombe Lugger back in the late 1970s and early ’80s. He called the boat Chidiock Tichborne–a 19-foot name, as he once put it, for an 18-foot vessel. 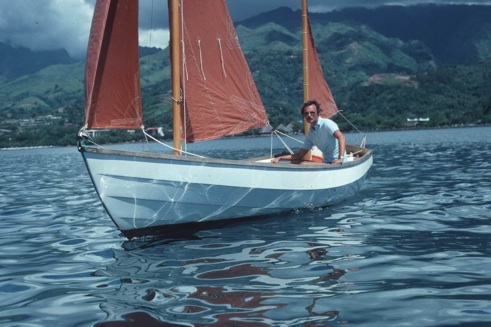 En route from Fiji to Papau New Guinea, Webb was pitchpoled 300 miles from the nearest land and spent two weeks adrift, tethered to his swamped Lugger in an inflatable dinghy. Amazingly, both he and the boat made it to shore and managed to continue their voyage. (For more titillating details, I suggest you read Webb’s excellent book, A Single Wave, which is but one of several he has written.)

Mimi is shorter than my previous Drascombes, just 15 feet long, and is unique among her sisters in that she has a bowsprit. When fully rigged, that is. For the sake of simplicity I normally sail her with just her sprit-rig mainsail. We also spend a lot of time motoring about in her with the rig out.

She was named Mimi by daughter Lucy, who for a time referred to all boats as Mimi. This after spending a week in the British Virgin Islands aboard a Sunsail catamaran named Mimi at age 2.

If you are interested in getting a Drascombe to call your own, you should be able to find one used if you are patient. Originally built in the U.K. by Honnor Marine, a number of them did make their way over here, and for a short period they were also built in Maine under license. They are still being built new in fiberglass in Britain by Churchouse Boats; there is also a builder here in the U.S., East/West Custom Boats, who can deliver them in wood.