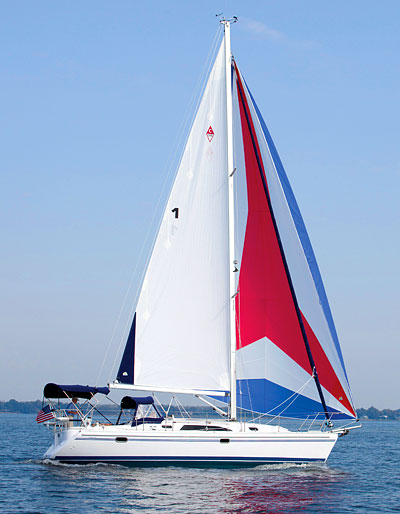 This is another of the boats I sailed after the Annapolis show that I’ve been meaning to hold forth on here. You’ll recall about a year ago I mentioned its predecessor, the award-winning Catalina 445, and raved about that boat’s very versatile aft cabin. This new 355, intended to be a scaled down version of its bigger sister, obviously doesn’t have the space for the same sort of accommodations, but it does share many other attributes.

Catalina’s Gerry Douglas actually uses the boats he creates, and his hands-on experience has influenced many different aspects of the 355’s design, starting with the cockpit, where there is a great emphasis on ergonomics.

The helm seat, for example, is raised, so most helmspeople won’t need to stand to see over the cabintop. The bench seats on either side, meanwhile, are somewhat lower to keep the coamings behind them high enough to provide good back support. The chainplates for the stout twin backstays are pushed as far outboard as possible so the stays don’t restrict or interfere with the space around the helm or around the two comfortable stern pulpit seats either side of the walk-through transom.

To preserve the sightlines from the helm, the low-profile binnacle has enough room on its granny bar to mount a chartplotter that does not protrude above the top of the wheel. Standard instruments are mounted outboard on either side, where they’re easy to see if you’re steering from one side of the boat or the other. The winches and working lines are well positioned, and the cockpit itself is quite large. During my test sail on Chesapeake Bay we had five people aboard, all of whom could work and/or lounge in the cockpit without getting in each other’s way.

Access from the cockpit to the sidedecks is very good. Plus the cockpit locker to port is enormous, with a conveniently located shelf that makes it easy to grab frequently used items. Douglas, an avid cyclist, told me with some pride that he intentionally made this locker just tall enough to accommodate a full-size bicycle with its front wheel removed.

Other deck details I liked were the 5-foot-long traveler on the coachroof just forward of the dodger and the long genoa tracks. Aesthetically, too, I found the boat’s topside and cabin profile pleasing, though not quite as attractive as the lankier 445.

The emphasis belowdeck is also on functionality. One detail in the head, the trendy-looking raised glass vanity sink, seems to belie this, but the reasoning behind it in fact is entirely practical. By lowering the countertop and raising the sink, Douglas explained to me, he was able both to create a nice dedicated shower space in the back of the head and have room for a bit of open counter space right around the sink.

Such attention to detail is evident through out the accommodation plan. Storage space in the rather small galley, for example, is more than adequate and is crafted to accommodate the items most commonly stored in a galley (one drawer, for example, is perfectly sized to accept cereal boxes). And to make the most of the minimal counter space, the reefer box, which is right next to the stove, is both front and top loading so you can work on the top while cooking and still access perishables.

The one flaw in the galley plan is that the door to the aft stateroom blocks the stove when open, so anyone in there must be shut in while the cook is working. The stateroom itself, however, is well conceived. The roomy athwartship double is not buried in a mere slit-trench of a cave; there is plenty of light and air, thanks to the one port window and two opening hatches, and good vertical clearance over the berth.

The saloon, meanwhile, makes the most of the available space. The twin captain chairs and table to port can be quickly converted into a full-length settee; the folding “quad-leaf” table in the dinette to starboard is quite versatile and useful. All storage areas under the settees can be quickly accessed without raising any cushions. Traditionalists may find the nav station a bit vestigial, but there is space to mount some electronics and just enough room on the desk to lay out a conventional chart book. The desktop also includes a tray for a laptop computer.

The best part of the interior is the master stateroom forward, which is lifted straight off the 445. Here there is room for a full-size island double berth (replete with an articulated head that raises up at the touch of a button, same as on the 445), a fair amount of open floor space, and lots of private storage.

The fit and finish through out the interior is above average for a mass-production boat, with solid wood joinery in all areas subject to routine chafe and abuse.

Conditions during my test sail, as is often the case on Chesapeake Bay, were frustratingly light. Fortunately, the 355 (like its predecessor) has a nifty removable bow sprit for flying over-sized reaching and downwind sails. If you’re a cruiser who likes to motor as little as possible this is a very handy feature. We hoisted a loose-luffed gennaker on a continuous-line furler and when a breath of air did appear quickly had the 355 moving along at a 5-knot clip. The steering was light and responsive; the boat easily fell into a groove.

In addition to the sprit, the 355 can also carry a full-sized 155% genoa (thanks to those long tracks). Our boat had an in-mast mainsail with substantial vertical battens, which is the standard rig. This performs well enough, but those who favor a conventional mainsail with more roach and slab reefing can specify one as an option.

Under power I found that the 355’s 29-hp Yanmar diesel pushes the boat along in flat water at a little over 7 knots at full throttle. At a more reasonable 2,200 rpm our cruising speed was about 5.5 knots. The turning radius is about 1-1/2 boatlengths, and the boat is very predictable and manageable when backing down, thanks to its large spade rudder.

Systems are laid out with an eye to access and servicing. All wiring is laid out in dedicated conduits under the flooring that are raised up above the bilge. The engine’s fuel and oil filters are in a dedicated chest in the head. The main electrical panel, which is itself quite large, is augmented by an auxiliary panel so that extra electronics gear can be added easily.

Most Catalinas these days are sold with air conditioning (and microwaves), so there is dedicated space for installing a generator aft, if desired. The pre-installed ducting leads to registers that are about waist-high, so they can reasonably be used for a heating system instead. One detail I liked very much was the sight gauge on the generous-sized holding tank, which makes it possible to accurately assess when a pump out is required.

The deck is balsa-cored and is joined to hull on an internal flange, bonded with 3M 5200 and fastened with bolts on 4-inch centers. Ballast is lead. 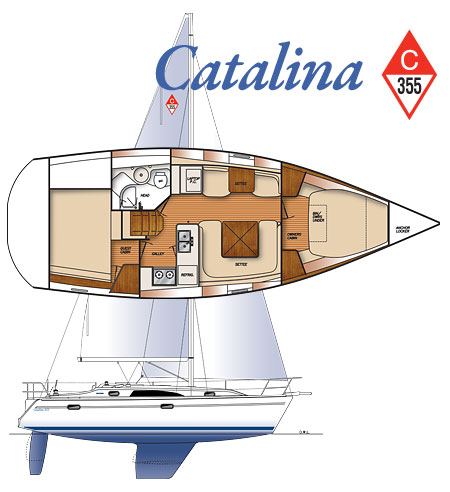