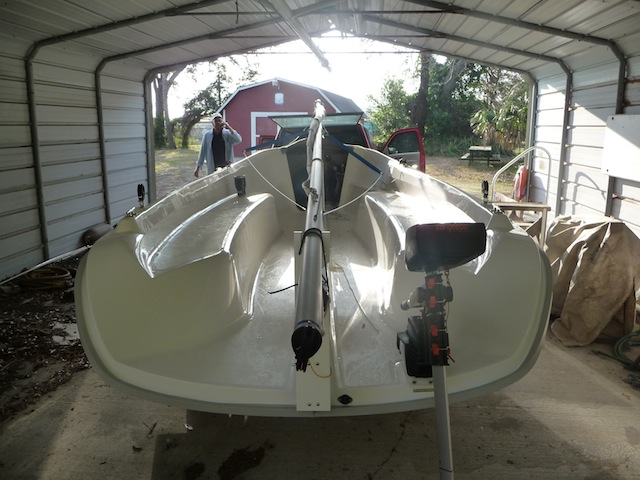 I made it up to St. Augustine and met Steve Pettengill, Director of Destructive Testing for Hunter Marine, at his R&D shed at 7:30 sharp yesterday morning. He had a brand new Hunter 18 fresh off the production line and we at once set about commissioning it for a test sail. The forecast was for a strong breeze from the south.

Being on the water in St. Augustine brought back some dramatic memories, as it was almost 20 years ago that I arrived here one fateful morning aboard the schooner Constellation. Just as we were entering the inlet, a huge pillar of black smoke suddenly came pouring out the midship hatches. It turned out we were not on fire, but we did have to shut down the engine. So it was that we sailed Constellation, a 78-foot vintage wooden vessel with a long full keel, into the Matanzas River, through the Bridge of Lions (a drawbridge), and finally landed on a dock at a private fish camp (which has since become Fish Island Marina). Later that same day a pilot in a small private plane buzzed the camp, waggling his wings hello, clipped a tree, and crashed and died.

I was half expecting my sail with Steve might be nearly as interesting, and I was not disappointed.

By the time we got the boat assembled and rigged, launched it from a nearby trailer ramp, and hooked up with photographer Billy Black, the wind was blowing 15 and gusting to 20. The mainsail on the Hunter 18 does have a set of reef points, and we did rig the reefing line, but Steve wasn’t interested in using it. Under full working sail in these conditions the 18 is something of a handful. But she handled very well. The wide hull has some nice chines running down the sides, and the boat is exceedingly stable for an 18-footer. She’s also pretty fast. Turning downwind, sailing past Fish Island Marina on a broad reach, we hit 7.5 knots over the ground while stemming an incoming tide.

This would be more than enough for most dinghy sailors. But not for Steve. Knowing him, I wasn’t too surprised when he pulled out the 18’s retractable sprit and started getting the asymmetric spinnaker ready to launch. By now we were closing the shore fast and would soon need to jibe. I did point out it might be better to set the chute after the jibe, but Steve ignored me. Up she went, and less than a minute after the hoist, just as a gust hit, we somehow scrambled through the jibe successfully.

The boat was screaming along now, and Steve and I were hooting and hollering like lunatics. We were too busy to peek at the GPS in the cuddy to see how fast we were going. Another gust came on, and I tried to steer down, but she got away from me. Big-time broach! Fortunately Steve blew the spin sheet in time and we stayed upright. After I finally got her pointed downwind again, Steve trimmed the sheet, and WHOOSH… we were screaming again.

Another gust… and this time I was very firm with the tiller. But I felt something bending, and the boat wasn’t turning, and when I looked down I saw the rudder had snapped at the head. 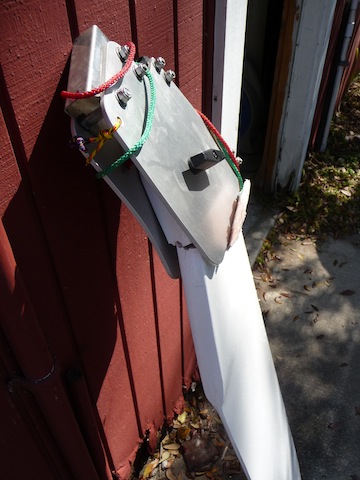 After we got the sails down and picked up a tow back to the R&D shed, Steve was immediately on the phone with Hunter giving directions on how to beef up the rudder. We dropped off the 18, then picked up a Hunter 22 and took it out for a sail. By now the wind was blowing even stronger, and this time Steve thought a reef in the main might actually be a good idea. We also did not set a chute.

We had an exciting sail nonetheless, though we didn’t break anything. Steve did confide, however, that he once broke the rudder off a 22 and had to get it beefed up, too.

I’m telling you this not so you’ll think these little Hunters are not up to the job. Indeed, I thought both boats yesterday sailed quite well. The point instead is that Steve takes his job seriously, and boats built by Hunter can’t help being stronger for it.

IN OTHER NEWS: They’ve located the liferaft off Berserk in the Ross Sea, but there’s no sign of the crew or the boat, and it looks increasingly likely that they’ve been lost. Also, an amphibious assault ship, plus two support ships and elements of the 13th Marine Expeditionary Unit are reportedly leaving San Diego bound for Somalia next week. So maybe President Obama is following my advice after all.