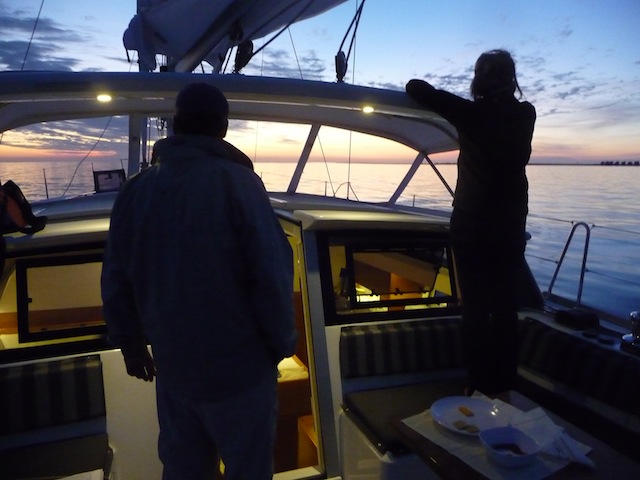 I’m just back from a jaunt aboard the new Beneteau Sense 50, which is still on the boat-show circuit and is currently en route from St. Petersburg to Miami under the command of Wayne Burdick, President of Beneteau USA. Wayne and his lovely bride, Joyce Harvey, are using this between-shows delivery as an excuse to engage in a little honeymoon cruising (they’ve been married little more than a year) and are also showing off the boat to interested parties like yours truly.

Also aboard as crew for Leg 1 of this odyssey was Stanton Murray, of Murray Yacht Sales, which represents Beneteau throughout the east side of the Gulf of Mexico. Together the four of us motored out of Tampa Bay under the Sunshine Skyway just as the sun was setting on Monday evening (fantastic aesthetics; see photo up top) and pointed the boat’s bow south toward Naples, about 120 miles away.

This boat is a game-changer in more ways than one. First, there’s the new Dock & Go system, on which I blogged after the Annapolis show. By coordinating control of a bow-thruster forward and a pivoting drive-leg aft via a single joystick, the system makes it possible to pivot the boat in place and even drive it sideways with the tips of two fingers. I had a chance to get my own fingers on the stick not long before we left St. Petersburg and I can attest that this truly is as fantastic as it sounds.

After just 15 minutes of fooling around with the Dock & Go in open water, I docked the Sense in a marina slip in a decent crosswind no problem. Most of the time I stay as far away from the helm as possible when it comes time to park someone else’s brand new 50-footer, but with the Dock & Go, it’s very easy to feel confident. No matter what sort of mess you get yourself into, you can always stop the boat in place, retreat, and regroup for another attempt, no matter what the wind and tide are doing.

Using the joystick control is not perfectly intuitive, but it is pretty easy to get the hang of it. The drive leg, which can pivot a full 180 degrees in just a third of a second, does most of the work. Push the stick straight forward or backwards and the drive leg will pivot either way to drive you forward or backwards. The further you push the stick the faster you’ll go. Twist the top of the joystick right or left and the drive leg locks in at a right angle and will push your stern directly right or left and will pivot the whole boat 360 degrees (or more!) if you keep the stick twisted long enough. To stop the boat pivoting dead in its tracks, just give a short, sharp twist in the opposite direction. Again, your speed is controlled by how far you twist.

Only when you push the whole stick straight right or left does the bow thruster fire up. Now both the thruster and drive leg are firing at a right angle to the boat’s centerline. This sets the boat to crabbing sideways in whichever direction, with the bow leading the stern a bit. Now when you twist the top of the stick you are simply increasing revs on the drive leg (to do this, you twist to the right when going left and twist right when going left), so you can goose the stern along a bit to keep up with the bow or, if necessary, lead with the stern. Revs are limited to 2,000 when the system is engaged, but this is more than enough power for you to put your stern wherever you want it.

In practice, when docking a boat, or leaving a dock, you use the pivoting drive leg much more than the thruster. I expect therefore that future iterations of the system installed on smaller boats may well feature the drive leg sans thruster. With this alone you’ll have a much easier time handling any boat at close quarters, no matter what its size.

One thing about the Dock & Go that does take some getting used to is how subtle it is. When maneuvering sailboats at close quarters most folks are used to using big bursts of power to keep things under control. But with the Dock & Go, once you are really comfortable with it (as Stanton demonstrated to us several times), you can use quite small amounts of power to hold the boat in place or creep short distances in any direction in a very controlled manner.

The other big game-changing feature on the Sense 50 is its lay-out. With its super-wide stern, enormous cockpit, and easily accessed main saloon, the Sense very effectively replicates the primary living spaces found on cruising catamarans. This little turn-a-monohull-into-a-cat trick has been tried before (I’m thinking primarily of the Dufour Atoll, an abortion of a boat if ever there was one), but Beneteau has really pulled it off this time.

No, the low-slung cockpit does not leave room underneath for a pair of aft cabins, but the cockpit lockers are enormous. On our boat the port side locker was tricked out as a clever passage cabin (Stanton’s preferred habitat, as it turned out), and you could easily do the same thing on the starboard side if you wanted. Inside, forward of the enormous saloon, there’s still room enough for three decent staterooms. (On our boat the third stateroom was configured as an office with a convertible berth on the desk top, but it can also be configured as a “sleeping room” with two bunk berths.) 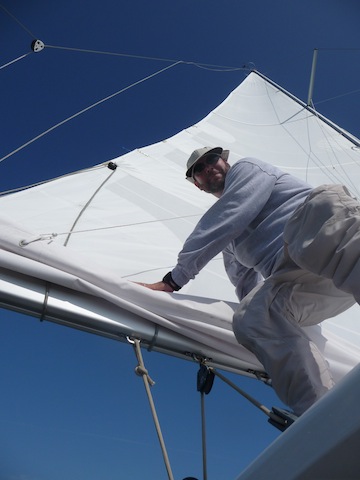 But how does the damn thing sail??? (I hear you cry.) I’m here to tell you it sails pretty damn well. Prior to this the only big boat with twin rudders I’d ever sailed was Brad van Liew’s old Open 50 Tommy Hilfiger, which isn’t exactly a cruising boat. The Sense 50 not only has twin rudders, but also a pronounced hard chine running along its topsides. Unlike many modern wide-assed cruising boats that gripe to windward something horrible when they start heeling hard to the wind, the Sense is easy to control when hard-pressed. Approaching Naples we were closehauled under full sail in about 22 knots of apparent wind, and there was just the right amount of weather helm. With the hard chine buried and the leeward rudder nearly vertical and biting nicely the boat tracked extremely well.

In light wind, too, I found the boat was a joy to handle. With both rudders biting the helm is extremely stable, with no lee helm and no tendency for the boat to jump off in a new direction when you release the wheel. Boatspeed was also pretty respectable. With a big jib-top up on a close reach we were sailing over 7 knots in 12 knots of apparent wind. In the same breeze closehauled under the working jib at a 38 degree apparent wind angle we made 5.5 to 6 knots. Once the breeze came up and started touching 20 knots, our boatspeed jumped back to 7 knots, and when we cracked off just a few degrees it hopped over 8.

Sailhandling, as on most large modern cruising boats, involves a lot of button pushing. Our boat had a conventional slab-reef mainsail instead of an in-mast furling sail, but it also had no fewer than four power winches in the cockpit, so little physical labor was involved.

The ultimate test came on Wednesday, the day after we tied up in Naples, shortly after Stanton retreated home to New Orleans. Joyce’s dad John and a large entourage of friends and family came by to visit and all were eager to go out for a sail on Wayne’s fancy boat. The wind in the marina was blowing pretty hard, pinning us into our berth, and if I’d been in Wayne’s shoes I would have punted for sure and made some excuse or other to keep from dropping lines. 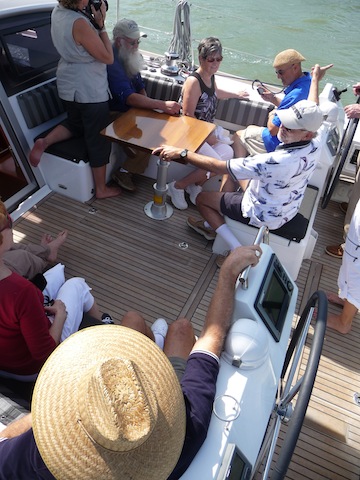 But no… Wayne was determined to put on a show for his new father-in-law. So out we went, with no fewer than 10 other people loitering about the cockpit as Wayne and I worked the boat. One guest pulled out a guitar, a couple of others pulled out mountains of food and laid out a nice feed on the cockpit table, and everyone had a fabulous time. A couple of hours later, with his fingers gripping the Dock & Go joystick, Wayne slipped the boat back in its slip without touching a single piling or pontoon.

It was, it turned out, the first time he’d ever docked a boat with the new D&G system. 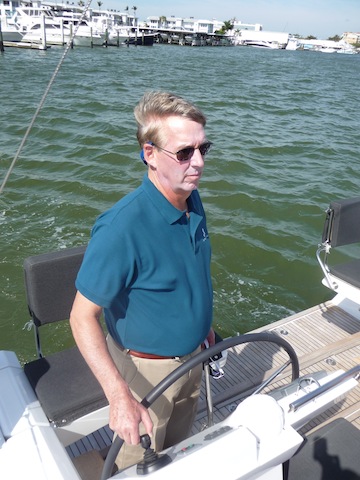 You can check out the Sense 50, and its smaller sister, the new Sense 43, at the Miami show the end of this month if you’re in the neighborhood. If you’re planning on buying one, be sure to tell Wayne I sent you. 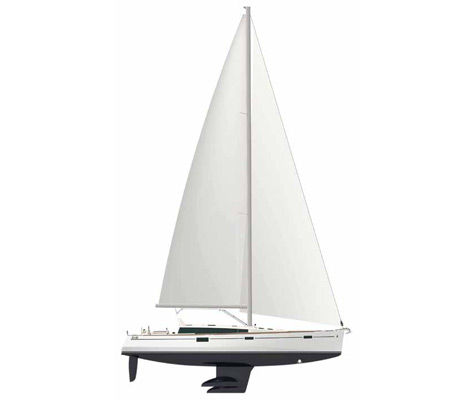 PS: I do have some gripes about the boat. Primarily, it needs a lot more handholds. I’m fairly tall, and I was able to move around the super-wide cockpit fairly easily when we were well heeled in flat water. But shorter people with less reach might find it challenging, and in really rough water I expect I would, too. I’d like to see handholds either side of the companionway on the outside, along the back of the fixed forward cockpit arch, and along the sides of the arch on the outside. I might also replace the top of the existing cockpit table (it twists around and flips open to get bigger) with a fixed top that can carry a big beefy handrail. (There is a removable centerline cockpit seat with a rail on it, but this takes up some space when installed.) There should also be a handrail down the middle of the coachroof aft of the mast.

The canvas dodger forward of the cockpit arch could easily be replaced with a fixed hard dodger, which would make dealing with the mainsail a lot easier. I’d also like to see a traveler for the mainsheet on the arch. With the current rig you can vang-sheet the main and play the halyard and outhaul to control shape, but a traveler would give you even more flexibility. Those ordering in-mast furling mains, however, won’t really care about this.