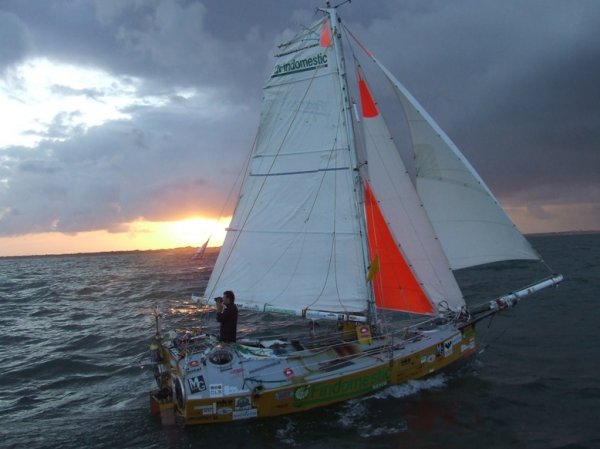 At last, here’s some serious recognition for my man Alessandro di Benedetto, who set a world record back in July for smallest boat used in a non-stop solo circumnavigation. Setting the record was one thing, but you’ll recall what was truly remarkable about Alessandro’s voyage was that he sailed the last three months on his modified 21-foot Mini 6.50 Findomestic Banca–from west of South America, round Cape Horn, and all the way home to Les Sables d’Olonne, France–with a jury-rigged mast. Though much of the sailing world made little or no fuss about this, the Cruising Club of America was duly impressed and has announced that Alessandro will receive their Rod Stephens Trophy for Outstanding Seamanship at a ceremony next month at the New York Yacht Club.

I spoke with Alessandro recently and he was pretty nonchalant about having been dismasted during his approach to Cape Horn. “I was already prepared in my mind to be dismasted five or six times during this voyage,” he explained. “So I was ready to rebuild the mast and had everything I needed. I was disappointed, of course, but I was not injured and I was ready to go to work.”

One of the toughest things about the voyage, said Alessandro, was having only one and a half square meters of living space in which to eat, sleep, and navigate. “To manage the weather conditions in the Southern Ocean, the strong winds and waves and very low temperatures–this was very hard on a small boat. The ergonomics were very uncomfortable. Just one more meter would change my life!”

Findomestic‘s jury mast was about 10 feet shorter than her original mast and this dramatically altered her speed potential. Before the dismasting, Alessandro said the boat was often sailing at 13 to 14 knots with spikes to over 20 knots when surfing down big waves. (“This was scary,” he noted.) Afterwards she averaged 3 to 6 knots, with a top speed of about 7 and a half. “This was not too bad,” he said. “I could sail as fast as a 15 meter cruising boat.”

What’s next for the crazy Italian guy? He’s hoping (finally!) to sail in some bigger boats and is looking for a sponsor for a Vendee Globe bid. “I have made some contacts,” he said. And again his tone here was perfectly nonchalant… “But for now there is nothing real.”