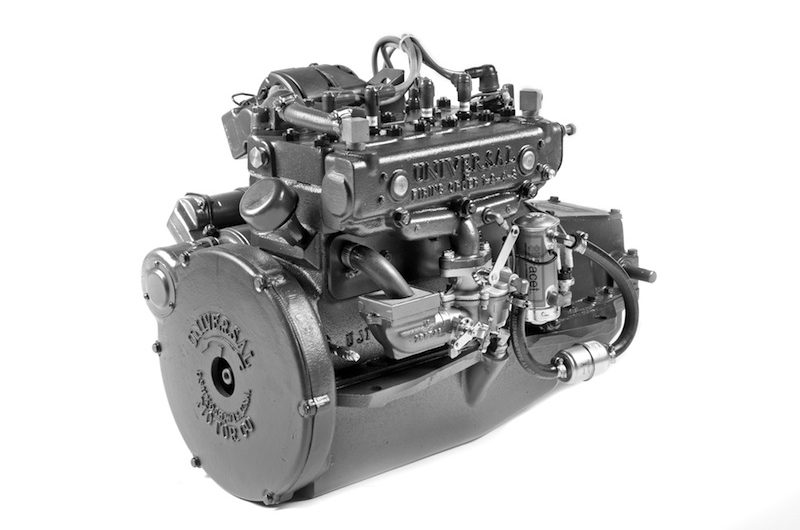 It seems hard to imagine now, but for about 50 years most auxiliary sailboat engines were gasoline-powered. By the mid-20th century the majority of these (in North America, at least) came from just one source, the Universal Motor Company. From 1947 to 1985 Universal’s famous Atomic-4 engine (aka the Atomic Bomb) was installed in over 40,000 sailboats ranging in size from 25 to just over 40 feet. At its peak in the 1960s and 1970s, Universal controlled about 85 percent of the market for sailboat auxiliaries.

Some 20,000 Atomic Bombs are still in service today. For cruisers who favor older, less expensive sailboats, it is still quite common to find these antique power-plants lurking inside engine compartments. Learning to live with a Bomb is thus, for some, still an important part of owning and maintaining a boat.

One reason for the Bomb’s great success was that it was not merely a marinized car or truck engine. It was instead designed and conceived from its mounting bolts up as a marine engine, thus was considerably more reliable than its competitors. The old Bomb did, however, have certain weaknesses.

Most Bombs, for example, had raw-water cooling systems (sometimes referred to as “open” systems) where “raw” seawater is circulated directly through the engine block to keep it cool. The build-up of scale and corrosion inside the block over time ultimately leads to blockages that can cause serious overheating problems. Also, raw-water-cooled engines tend to run at lower temperatures. This leads to condensation in the engine and less efficient fuel combustion, which causes carbon to build up on valves and piston rings.

By contrast, almost all marine engines today instead have freshwater closed systems. Here fresh cooling water circulates in a closed loop between the engine and a heat exchanger, through which raw water from outside the boat also circulates, drawing away heat from the fresh water. This allows for more efficient fuel combustion and creates fewer corrosion problems.

As a gasoline engine, the Atomic-4 also has an electric ignition system with spark plugs. These often suffer in the damp and corrosive marine environment. Finally, of course, gasoline is a very volatile substance; it is also considerably less efficient than diesel fuel, which effectively doubles a boat’s range under power without any increase in fuel-carrying capacity.

For all these reasons, the current conventional wisdom is that only diesel engines should be installed on sailboats. Owners of older boats with Atomic Bombs aboard are often urged to repower with diesel engines, and for the past 20 years replacing old Atomic-4s with new diesels has been a cottage industry of sorts. At least two manufacturers (Westerbeke, which bought Universal, and Beta Marine) currently offer drop-in replacements that fit easily into engine spaces originally configured for the Atomic-4.

But consider this: most surviving Atomic-4s are found on older, smaller boats with market values ranging generally from $8,000 to $30,000. Installing a new diesel engine costs roughly $7,000 to $10,000. A new engine does increase a boat’s resale value (in fact this is one the very few systems upgrades of which this is true), but even if you sell your boat when the new engine is young, you’re unlikely to recoup more than half your investment.

For casual coastal cruisers who don’t need extra range when powering, learning to live with a Bomb may be what makes the most sense. There is a strong, mutually supportive subculture of Bomb owners, parts are still available, and the old engines can be tweaked and improved. For example, a freshwater cooling system can be installed, a more reliable electronic ignition system can be added, oil filters and water pumps can be upgraded, and so on.

As for the old bugaboo about storing gasoline aboard, most cruisers carry more than enough gas for their dinghy’s outboard to blow up their boats in any event. As with so many things, safe operating procedures are the key. An Atomic-4’s engine compartment should always be well ventilated with a blower fan prior to starting the engine so as to evacuate lingering fumes. Follow this simple precaution and there’s little chance a Bomb will detonate. Indeed, as far as I am aware, there are no known instances of a Bomb ever exploding.

If you’re a bluewater cruiser, however, you should almost certainly jettison your Bomb in favor of a diesel. Diesels are much easier to maintain over the long run and on long voyages the extra range they provide is invaluable. The only bluewater sailors with gas engines I’ve ever encountered were extreme minimalists on smaller boats (or simple multihulls) that carried only outboard engines for auxiliary power.

If you do have a Bomb on your boat and would like to maintain rather than replace it, you should definitely get in touch with the folks at Moyer Marine. They are extremely helpful and are a veritable fount of Atomic wisdom (and  parts). Indigo Electronics is also a good source for after-market upgrade kits.