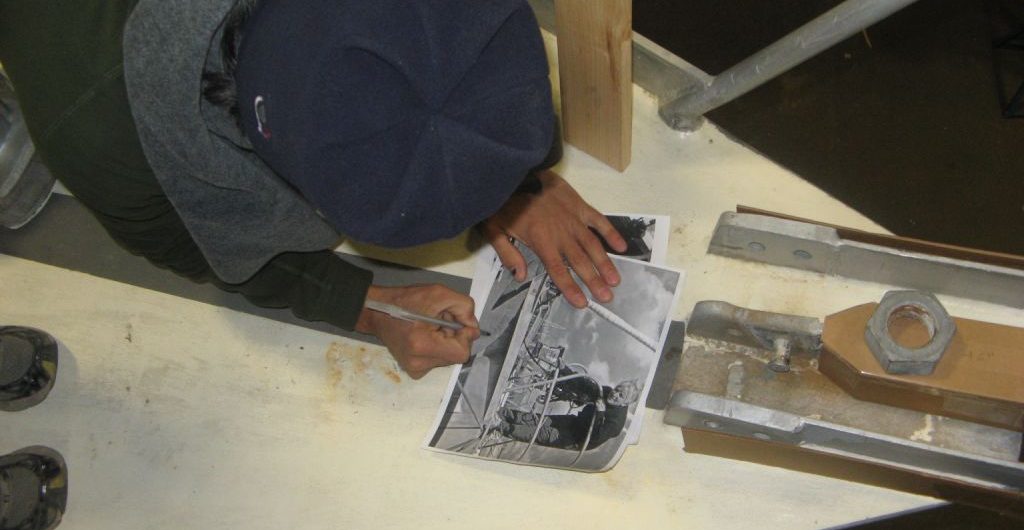 Project Proboscis is lurching ahead. On Wednesday afternoon I met with Brian Harris, Jeff Stack, and Will Rooks at Maine Yacht Center and we spent a good hour noodling over the design of Lunacy‘s new bowsprit. After much debate with myself and some consultation with others (including Scott Alexander at Selden Mast and Doug Pope at Pope Sails), I’ve decided not to adopt the bold plan proposed by Lunacy‘s original designer, Yves-Marie Tanton, which I described in my last post on this subject.

Yves-Marie envisioned a massive 10-foot aluminum pole, 6 inches in diameter, that would extend 6 feet past Lunacy‘s bow and would be deployed manually when needed and stowed on deck when not. I, however, envisioned myself scrambling about the foredeck trying to handle this formidable piece of metal alone while rolling about underway and concluded, as a lazy-bones cruising type, that I might often choose to forego such an ordeal and keep sailing more slowly instead. You’ll recall I was also worried about whether an unsupported pole sticking out that far could carry the load generated by a Code-0-type headsail with its luff dogged down as tight as possible when sailing to windward.

I got mixed opinions on the load question. Some of my advisors thought Yves-Marie must have been smoking something when he drew up his proposal; others thought his pole, because it is so hefty, would probably be up to the job. You’ll note in the comments to the last post that Yves-Marie himself has suggested a tackle could be deployed under the sprit as a bobstay to assuage my concerns. I had in fact thought of this myself. But having to deploy a separate piece of running rigging in addition to wrestling with the pole, in my mind, made it even more likely I would leave the pole stowed on deck unless I was sure I could fly a sail from it for a rather long period of time.

I discussed all this with the folks at MYC and decided I preferred Brian Harris’s original idea of a shorter fixed A-frame sprit with a fixed bobstay. I was again surprised at our meeting on Wednesday, however, when I found that the MYC crowd had elected to mock up a three-foot fixed box-beam sprit with channels and outboard rollers for anchors and rode. 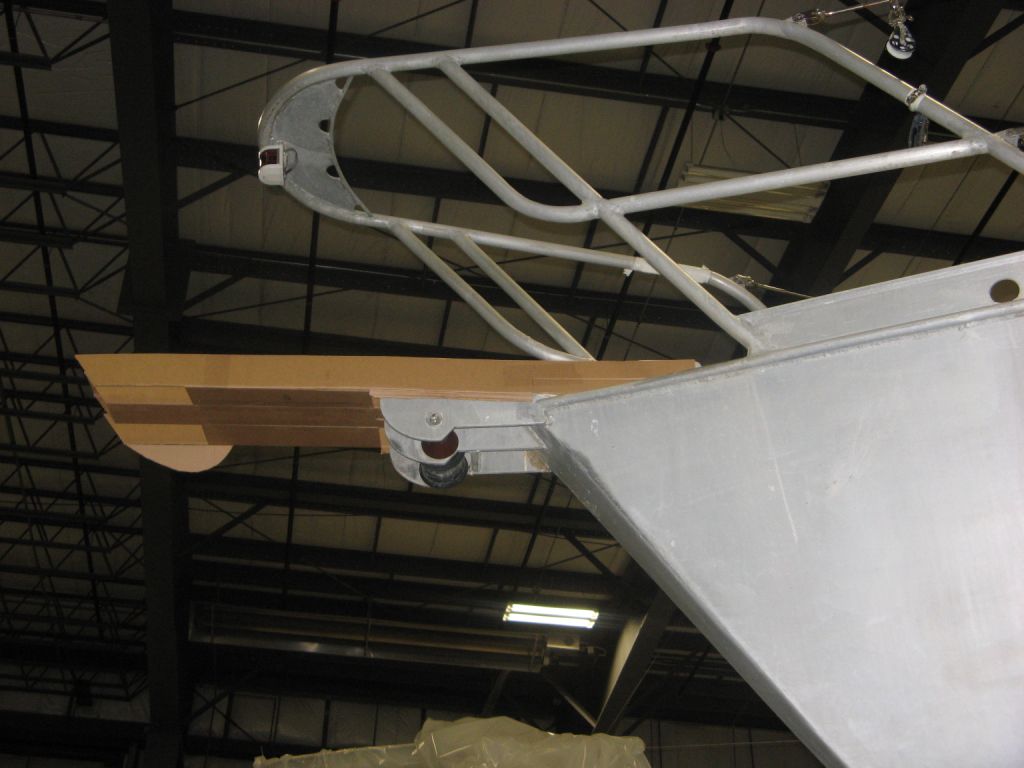 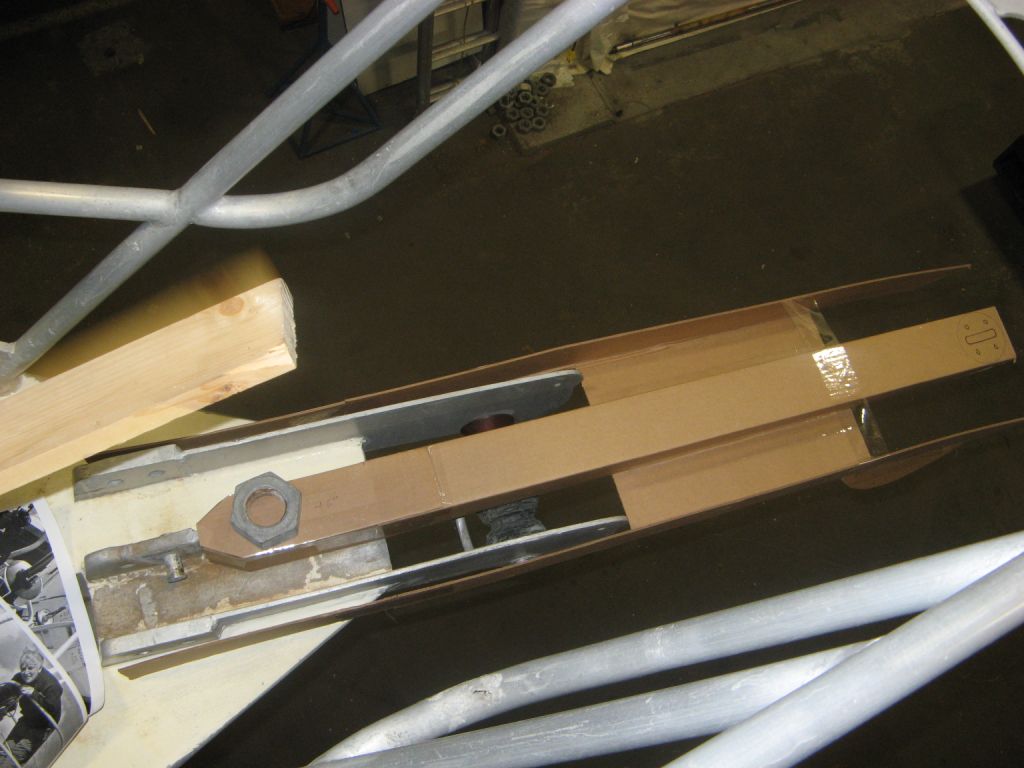 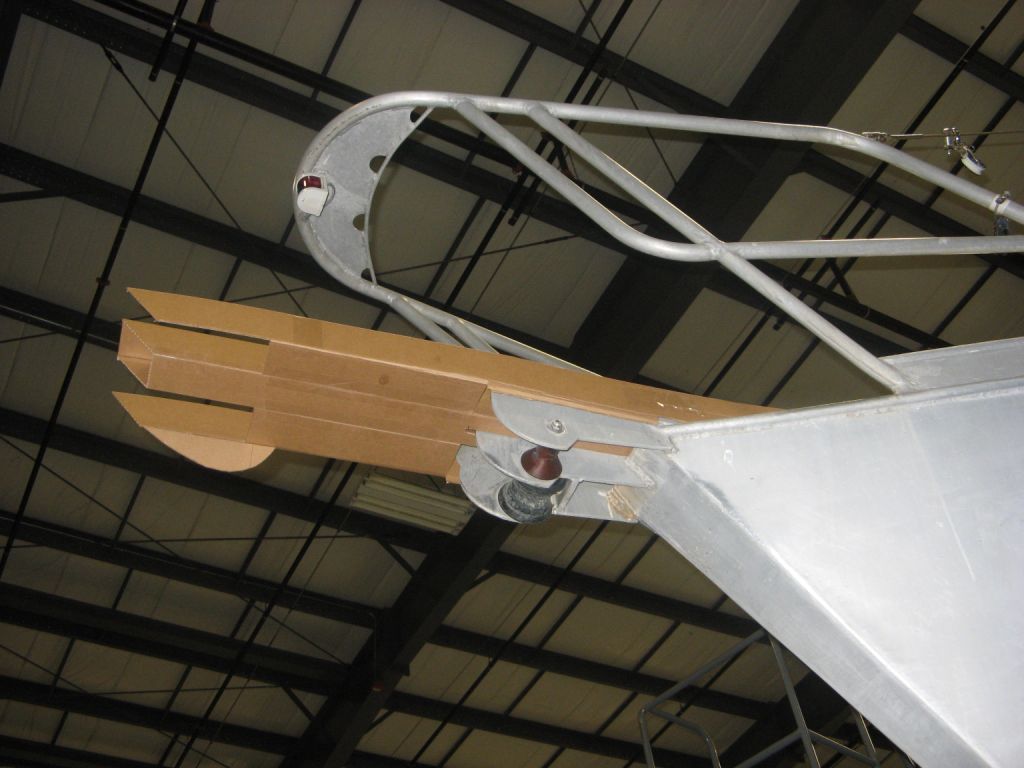 Their inspiration for this design came from photos I’d provided (see previous post) of the nifty sprit on my friend Neil McCubbin’s aluminum Garcia Passoa 47. What is not shown in the photos of the cardboard mock-up above is that a vertical plate would be welded in place between the underside of the sprit and the stem of the boat so as to provide vertical support in place of a bobstay. (The existing bow rollers, obviously, would be removed. Also, the forward part of the bow pulpit will be cut away.)

I like this idea because: 1) I don’t have to deploy anything (other than a sail) in order to use this sprit, which makes it more likely I will use it more often; 2) the anchor rode when deployed won’t be chafing against a bobstay; 3) it looks kind of cool; and 4) next time a schooner like the Harvey Gamage comes along and rams Lunacy‘s bow, said schooner will likely suffer grevious damage.

One thing we agreed on is that the box beam, which has a diameter of 3×3 inches in the mock-up here, should instead measure 3×4 inches. I also suggested that the box beam should push out another foot on its own, forward of the channels and anchor rollers, with a second pad-eye on the end of it, 4 feet from the bow, for flying an A-sail. I got this idea for a sprit with two tack attachment points from Doug Pope, who shared with me this photo of a sprit on a Farr 40: 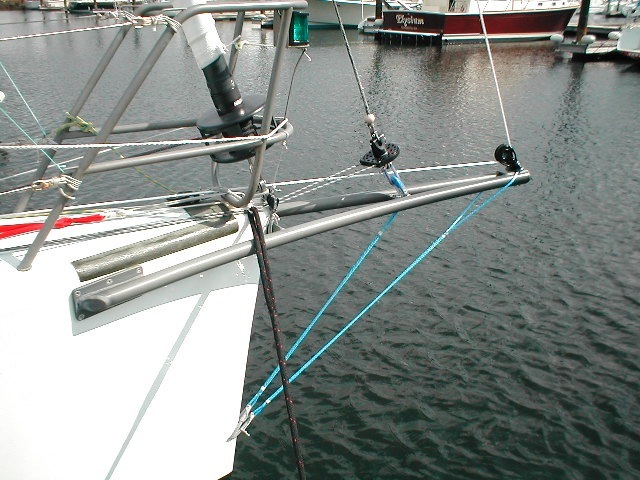 The next step is to build a more detailed mock-up in wood. No doubt there will be further refinements and a lot more second-guessing as we go forward, so stay tuned.