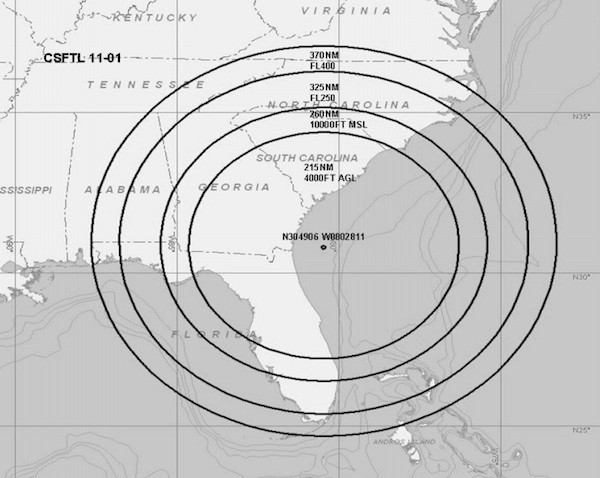 Folks messing around on boats anywhere from the northern Bahamas to Cape Hatteras need to know their GPS receivers may or may not sometimes go crazy over the next month. This according to a rather cryptic FAA advisory warning pilots of military GPS tests being conducted between January 20 and February 22.

These tests evidently may affect GPS service for up to an hour at a time within an area up to 370 nautical miles from a specific set of coordinates off the north Florida coast (see map up top). During tests, so says the FAA, GPS signals “will be unreliable and may be unavailable.” You’ll note from the map that the affected area is in the shape of an inverted cone and grows wider as altitude increases. So ground-level reception may not be affected. That’s what my man Ben Ellison believes, but I wouldn’t take chances. Be prepared to navigate the old-fashioned way in you’re sailing in these waters! Particularly if you’re right on the Georgia or north Florida coast.

Advance warning of specific test times will be issued at least 24 hours in advance via Notices to Airmen (NOTAMs), which can be accessed online here.

I hate to say I told you so… but I told you so. Wouldn’t it be nice if we had a nice eLoran system to rely on when stuff like this happens? Oops… we decided to turn that off for some reason.