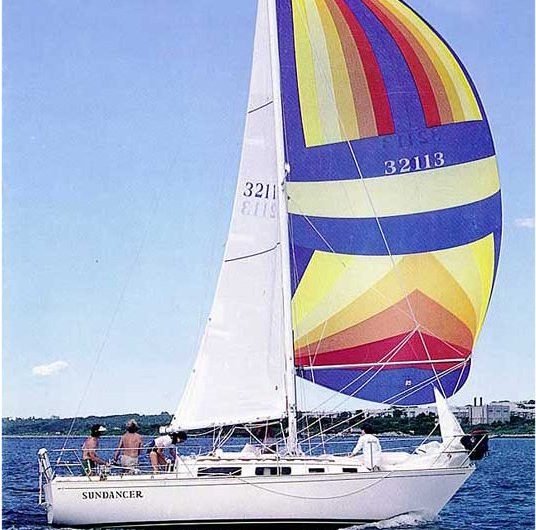 This stylish little pocket yacht is both the first and smallest boat ever produced by Sabre Yachts, a quality production boatbuilder based in southern Maine. Designed by the company’s founder, Roger Hewson, and introduced in 1971, the Sabre 28 was the only boat produced by Sabre until 1977. Production did not cease until 1986, by which time 588 hulls had been launched.

The boat has a generous rig, is not at all slow for its size, and early in its career was often raced as a Half-Tonner under the old IOR rule. Today many Sabre 28s still sail in club races with PHRF ratings below 200, but they are primarily used as cruising vessels. Though most suitable for coastal work due to their small size and low-capacity tanks, they are certainly strong enough to sail offshore if desired.

The boat’s construction is straightforward and well executed. The hull is solid fiberglass laminate set in polyester resin with eight layers of mat and woven roving down low tapering up to four layers at the sheerline. The exterior gelcoat is excellent. The deck is balsa-cored with plywood substituted in high-load areas where hardware is mounted; the hardware is also supported by heavy aluminum backing plates.

Secondary bonds between the hull and bulkheads and other structural members are superb, as is the finish quality of the glass work generally. The ballast is lead, mounted externally on stainless-steel keel bolts that are easily accessed in the bilge. The deck joint consists of an inward-facing flange bedded in non-adhesive butyl sealant and fastened every 6 inches with stainless-steel bolts. One significant flaw in earlier boats is that the through-deck chainplates were sometimes poorly sealed. This can cause the main bulkhead, to which the chainplates are fastened, to delaminate and eventually rot if it is not corrected.

Several modifications were made to the Sabre 28 over time. In 1976 a new deck mold was created. This incorporated an anchor well up forward, a reconfigured T-shaped cockpit that more easily accommodates a pedestal and wheel (only about 10 percent of the boats have the standard tiller steering), plus a more attractive split aft window on the cabin side.

The deck-stepped rig was also improved about this time. Forward lower shrouds were added to keep the mast from pumping too much and the chainplate seals were improved. In 1982 the height of the mast was slightly increased from 41 feet to 43 feet (increasing sail area by 12 square feet), the standard keel’s draft was increased 4 inches, ballast was increased by 200 pounds, and the mainsheet traveler was moved from the transom (where it sometimes caused the mainsheet to quarrel with the helmsman’s head) to the coachroof forward of the companionway.

There were four different auxiliary engines installed in the Sabre 28 over the course of its production run. The old gasoline-powered Atomic-4 was available until 1978, as was a 10 hp (later a 13 hp) Volvo diesel. Finally, after 1981, a 13 hp Westerbeke diesel was installed. On many of the early boats the prop shaft is slightly offset to one side or the other, depending on which way the propeller turns. It is critical when repowering one of these boats to make sure the new engine turns the prop the same direction as before or handling under power will be severely degraded.

As mentioned, the Sabre 28 sails well for a boat its size, thanks both to its large sail plan and its well-formed fin keel and skeg-supported spade rudder. For a boat that is not terribly light it is particularly handy in light air; it is a bit tender and heels quickly when the wind gets up unless sails are promptly reefed. Because the chainplates are well inboard, headsail sheeting angles are potentially quite narrow. But boats equipped with the optional inboard genoa track (there is also a standard toerail track) and a standard deep keel (as opposed to the optional shoal-draft keel) are reasonably close-winded. Note, however, that boats with offset prop shafts sail a bit better on one tack than they do on the other.

The one drawback to the Sabre 28 from a cruiser’s perspective is that its interior can feel cramped. It does have good standing headroom for a small boat (about 6 feet throughout), but the cockpit is also large (7 feet long) and this inevitably shrinks the space available belowdeck. Also, the standard sleeping layout on most boats is over-ambitious, theoretically accommodating six people (two in the V-berth forward, two on the port settee extended to form a double, one on the starboard settee, and one in a quarterberth). 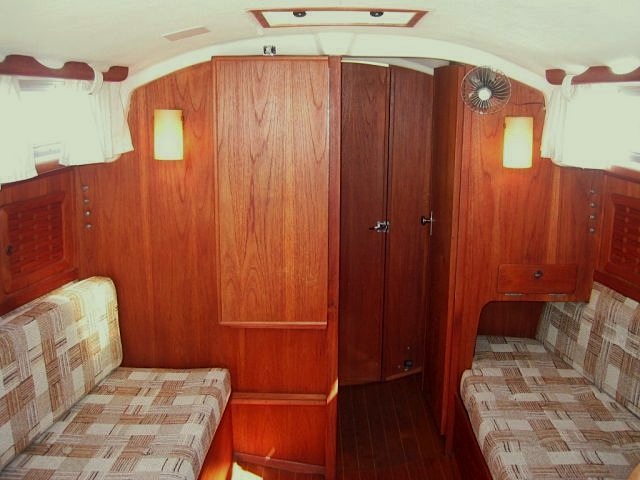 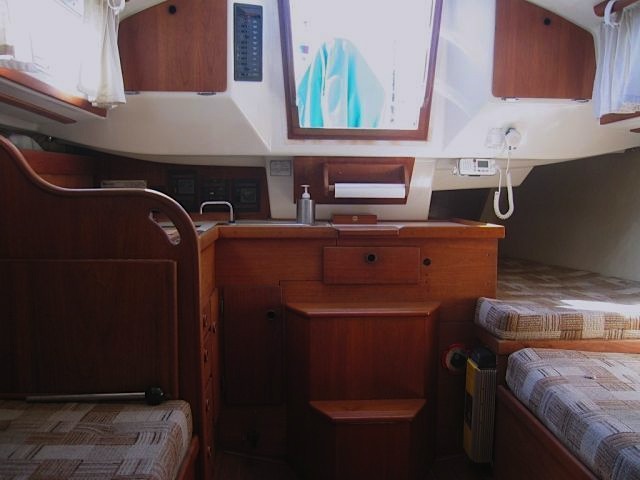 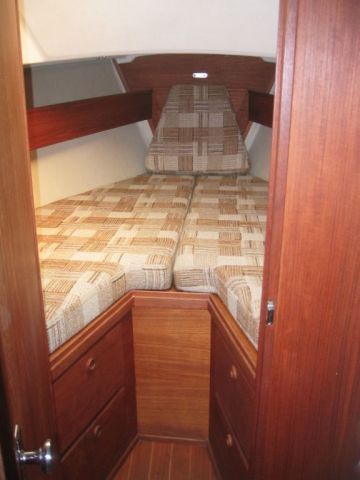 The six-berth layout reduces galley space, which is unfortunate. The sink, though it is close to the centerline and drains well on both tacks, is also right beside the companionway so that you can easily put a foot in it when coming below. The fixed countertop stove is hard to cook on while sailing and the tight space makes it hard to install a gimballed stove in its place. There is also a much more realistic four-berth layout with a somewhat larger galley, but this appeared in only a few of the earlier boats.

The interior in other respects is very pleasant. The quality teak joinery, rare on a boat this small, makes it warm and attractive, the fold-down bulkhead table works well, and the athwartship private head compartment is as functional as you can expect on an older boat less than 30 feet long.

Due to the quality of its construction, the Sabre 28 is more expensive than other used boats in this size range. The extra money spent, however, is not wasted. Because they are nicer boats to begin with, most owners maintain their Sabre 28s in good to excellent condition. Sabre still provides lots of technical support for their out-of-production boats, so it isn’t hard to get parts or good advice when planning upgrades and structural repairs. The boats also hold their value well compared to similar vessels.

In the end, the Sabre 28 is a very safe compromise boat. It has relatively modern lines, yet is attractive to traditionalists, is very well built, sails well, and has a great ambiance below, if not an ideal layout. Unfortunately, these boats rarely appear on the brokerage market on the West Coast, but if you live on the East Coast they are readily available. 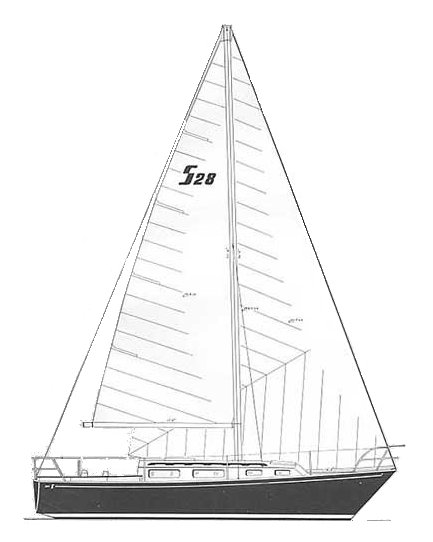 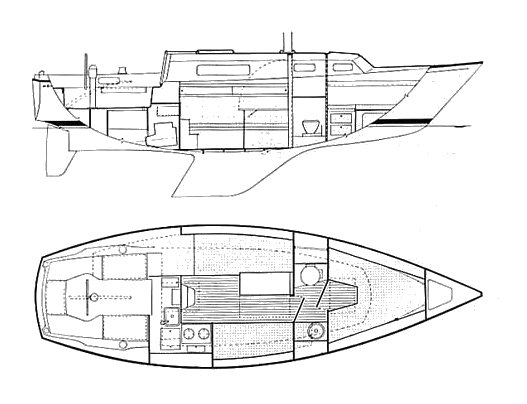