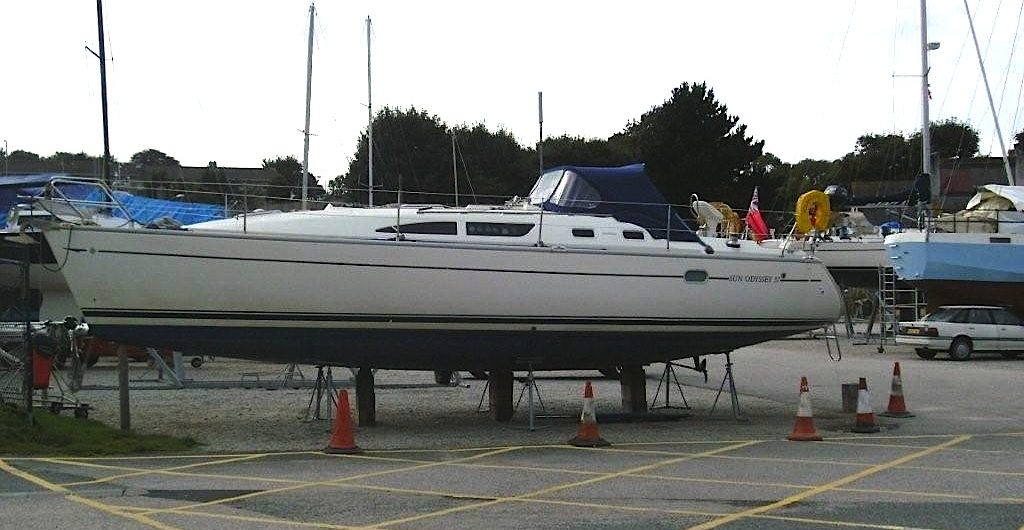 I’m remembering that famous line from The Treasure of Sierra Madre: “Keels? We don’t need no stinking keels!”

And, apparently, you don’t. Not all the time anyway. For proof of this I offer into evidence the eyebrow-raising tale of Polbream, a Jeanneau Sun Odyssey 37 in charter service in Falmouth, England. As documented in recent issues of Yachting Monthly, Polbream was halfway through a round-trip bareboat charter to the Isles of Scilly this past August when she struck a rock and her keel fell off. Her crew never noticed the missing appendage, or the missing 4,000 pounds of ballast, and returned the boat to charter operator Cornish Cruising in Falmouth without mentioning the collision with the rock.

Polbream was then sent out on another charter, a round trip to Plymouth and back, and this crew also failed to notice the boat had no ballast or keel. They did note the steering was a bit squirrely, but never investigated the cause. Only on Polbream‘s third keel-less charter, after sailing nearly 150 miles with no ballast, did her crew realize something was seriously wrong.

Divers eventually discovered the missing keel standing upright in 20 feet of water in a rock cleft just north of the island of Tresco in the Isles of Scilly. David Cox, a surveyor hired by Polbream‘s insurers, posits in the current issue of Yachting Monthly that the yacht’s keel suffered a perfectly placed “karate chop” blow in line with the boat’s vertical center of gravity. The skipper at the time, who has not been identified, apparently reported that he struck Little Kitten Rock north of Tresco doing 4 to 5 knots under power, but thought it only a “glancing blow,” because the boat only lifted upwards a bit and never slowed down. After checking the bilge and finding no leaks, he assumed no damage had been done, though he did find the boat hard to control as she motorsailed on a broad reach back to Falmouth in 12 knots of apparent wind.

What’s to learn from this absurd little fable?

First: modern hull forms, which carry quite a lot of beam all the way aft, have a great deal of initial stability. In moderate conditions sailing off the wind their ballast keels evidently don’t play a huge role in keeping them upright.

Second: people who charter bareboats really can be a bit clueless sometimes.

Speaking of which, I’ll be taking the family on a week-long bareboat charter aboard a 39-foot Beneteau directly after Christmas. So things here at WaveTrain will be a bit static for a while after I publish this post. But I promise a) I’ll check to see if our bareboat has a keel before sailing it anywhere; and b) I’ll give you a full report on our adventure upon our return.

PS: If you want to read a bit more about Polbream‘s missing keel, you can check out this Yachting Monthly Scuttlebutt forum thread (appropriately titled “Cornish Cruising has incredibly safe boats”) right here.

See you in the New Year!