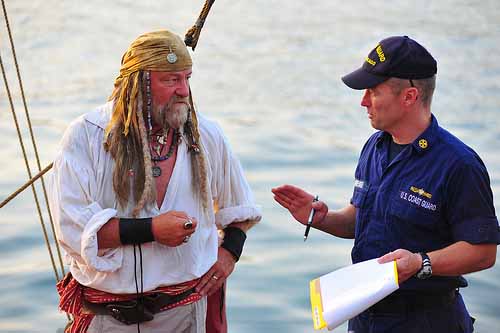 Every once in a while my useless law school education becomes temporarily useful again. For example, I’ve followed with some interest recent exchanges on the Waterway Guide discussion board re a police boarding of a Gulfstar 50 that took place this week on the ICW in Florida. Take a gander at these two accounts of the very same incident from opposite sides of the coin and see what you think.

Version One, from the owner of the boat:

I am the owner of a Gulfstar 50 cruising sailboat . . . . I have been bringing the boat from Newport RI to southern Florida and points south for the last 14 years. Today, Wed. Nov. 3, 2010, I was transiting the AICW from New Smyrna, Florida, southbound. I had come in from offshore last night, shutting my sanitation valves and diverting them to holding tanks as is my practice when onshore. They are remotely located and accessible only to me. My crew has no knowledge of their location.

At 1000 while I was below cooking bacon, my crew who was driving, yelled to me “we are being boarded by police.” We gave no provocation for this incident. I prepared to shut off and secure the stove, hot liquid bacon grease, propane, flame, etc. Next thing I see is an officer right next to me in the corridor of the galley with a .45 caliber automatic weapon drawn and pointed at my chest.

“Get on deck” he ordered.

These officers never asked permission to board. We were cruising at 7 knots. Two of the three officers had jumped on board. The remaining officer fell back in my wake in his boat, while the other officer (the one who had drawn his weapon on me), put dye in my heads and flushed. The boat behind said he saw no dye. So my tanks were retaining the discharge. The other officer on board proceeded to issue me a $250 citation for one “unsecured valve.”

In conclusion, I think this type of unprovoked assault on an innocent cruising boat is inappropriate, to say the least. It is uncalled for and an overreach of power. We had done absolutely nothing wrong. We were not discharging anything overboard. My crew did not know where the valves were. I was the operator of the vessel and was in total control of the sanitation system, yet I was given a citation (under gunpoint) referencing 327.53, which says I must do what I had already done.

I read this and was immediately incensed. Every fiber of my libertarian-American-cruising-sailor soul was ready to rise in revolt and burn down every government edifice in sight.

But then I read Version Two, from the Volusia County Sheriff’s Department:

First off, the author is in fact correct that no provocation with law enforcement had occurred prior to the boarding. However, it should be clearly understood that no provocation is required, or even permission needed, for law enforcement to board a craft for the purposes of conducting a lawful inspection. The reality is that transient crafts moving through the waterways within our jurisdiction have been known to dump sewage into our waterways on many occasions. Along with ensuring boating safety and compliance with the rules of the water, the prevention of sewage dumping is another responsibility taken very seriously by the Volusia County Sheriff’s Office and its Marine Unit. I feel certain that everyone with an interest in preventing the pollution of our waterways appreciates our efforts in this regard.

With that in mind, some key facts were omitted from the description of the encounter on November 3, 2010. Most notably, when our deputies boarded the craft, they ordered the two occupants on the top deck to stay where they were. In direct defiance of the deputies’ order, one of the passengers ran to the cabin area, where noises could then be heard that sounded as if compartments or drawers were being opened. Not knowing the intent of the passenger or the reason for his failure to comply with their orders, and fearing that he may have been reaching for a weapon, a deputy did in fact draw his duty weapon for officer safety purposes.

This in no way was inappropriate, an over-reaction or an unprovoked assault, as alleged by the writer. Given the sequence of events, this was an entirely appropriate and necessary act on the part of the deputy until they could secure the occupants and gain control of the scene. To those on this web site who are questioning the actions of our deputies, I ask you to think for just a moment what you would have done in the same circumstance. Given the dangers that law enforcement officers face every day on the job, I also ask you to stop and consider what might have occurred if the passenger was, in fact, reaching for a weapon and the deputy had not drawn his weapon for protection. Our deputies are trained to exercise restraint. But they also are trained to draw their weapons if they perceive the potential for harm. Waiting for the danger to be upon them is tragically too late to react.

Lastly, it should be noted that the inspection of the craft did result in the discovery of a discharge valve that was not properly secured, as required. As unsettling as these events may have been for the occupants of the craft, the events would have transpired much differently had all of the occupants simply complied with the lawful commands of law enforcement.

And on reading this, my perspective changed entirely.

First spoke the ex law student: The sheriff’s department is absolutely right. Legally they can board any vessel they want whenever they want for any reason or no reason whatsoever. It is an unfortunate peculiar true fact of American law, which otherwise is very jealous of personal space vis a vis government searches, that the Fourth Amendment of the U.S. Constitution largely does not apply when you are aboard your boat. Partly this is a practical exception. Unlike a house or other building, a boat is very mobile and thus a potential source of all sorts of mischief, and it makes sense to give The Man some latitude with respect to searching them. More important, it is a universal time-honored maritime tradition. Historically, in all parts of the world, authorities have never needed to justify boarding vessels in their jurisdiction, which is why you have many more Fourth Amendment rights when riding in your car (an equally mobile and potentially useful criminal vehicle) than you do when sailing on your boat.

Sure, in an ideal universe authority figures boarding your boat would be sensitive to the fact that most people expect they still have rights while afloat. But as law enforcement officers, the sheriff’s deputies of Volusia County surely cannot be criticized for taking advantage of what legal powers they have. If you don’t like this feature of American law, you will gain nothing by complaining to your local sheriff. What you need to do is lobby Congress.

As for the business of the drawn gun… the ex newspaper reporter in me (who once spent much time hanging out with and teasing info out of cops) understood the sheriff’s POV precisely.

Here’s a hot tip from one who knows: anytime you are detained by law enforcement, for whatever reason, never do anything that might let them think for an instant that you are trying to access a weapon. They are very paranoid about this. Quite rightly, cops in our fair nation of very heavily armed citizenry live in constant mortal fear of having people pull guns on them.

If you understand this, you can get away with all kinds of things. For instance, I constantly drive around at very high speed and am often pulled over by the police. But I never get tickets. WHY? Because when they’re walking up to the car to talk to me, I put my hands on my head and keep them there until they can see the interior of my car. Only then do I reach for my wallet. That and a lot of “yes sir I’m sorry sir” answers to what they have to say to me gets me off with a warning every single time.

Given all this, however, the thing that still really ticks me off about the incident in question is that all this sturm and drang was over a freaking federal toilet law that does nothing useful to protect the environment and may in fact increase pollution overall. If you read through the comments on the Waterway Guide board, you’ll see one seemingly savvy fellow asserts that Volusia County is just milking the federal law to extract some extra local revenue from transient cruisers.

This, frankly, seems quite likely to me.

At some point in the future, I promise, I will let the ex law student bloviate at length on federal toilet laws. And then for sure we’ll see some s**t hitting the fan.