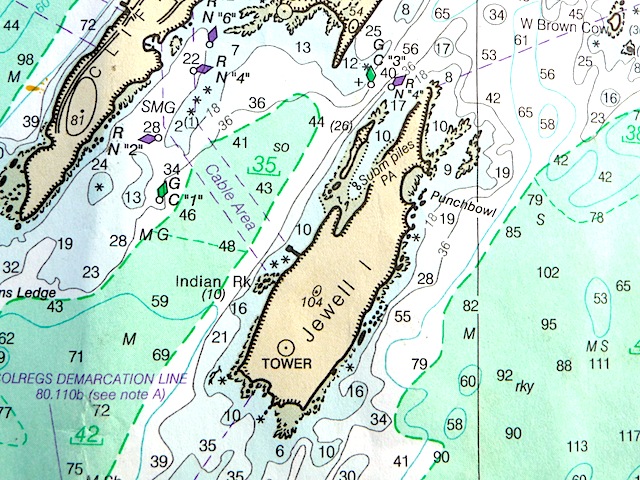 Due to an abrupt increase in sailing magazine responsibilities (ironically), I’ve concluded I won’t have time to sail Lunacy south for the winter this year. Instead, for the first time in three years, she’ll be hauled out next week and stored on the hard here in the soon-to-be-frozen Northeast. I am none too happy about this and over the past two days sought to console myself with one last solo mini-cruise on Casco Bay.

Of all the many anchorages within spitting distance of Portland, the most popular is probably Jewell Island. The island is laced with a nice maze of trails, and at the south end there’s a large complex of old World War II fortifications that are great fun to explore. The old concrete observation tower is eight stories high and affords a fabulous view of a huge swath of the coast. The gun emplacements, meanwhile, look large enough to seat weapons capable of hurling shells the size of compact cars a dozen miles or more.

In the summer the anchorage itself, which is small and quite narrow, is often overcrowded. But I reckoned this time of year, nearly two months after Labor Day, I just might have it all to myself.

And I nearly did.

With the wind blowing firmly from the southeast, I was able to sail off my mooring in Portland, scooch across Diamond Island Roads on a close reach, drift down Diamond Island Pass on a broad reach, squeak through Hussey Sound closehauled (had to pinch quite a bit at the end), and then reach across the open water of Lucksee Sound without once tacking or jibing the boat. Bearing away again as I approached Jewell, I saw there was one lone mast jutting above the high ledge that forms the west side of the anchorage.

Amazingly, though it was quite late in the afternoon, I also saw, as I sailed through the channel between Jewell and Cliff Island, that a sail was being hoisted up that mast. And even as I rolled up my jib and fired up the engine prior to turning in to enter the anchorage, that sail filled with wind and the boat beneath it starting sailing out the anchorage.

Ah, sweet solitude. Not long after I got the hook down, I poured myself a bit of wine, lit a cigar, and savored the vivid hues of a fine autumn sunset. 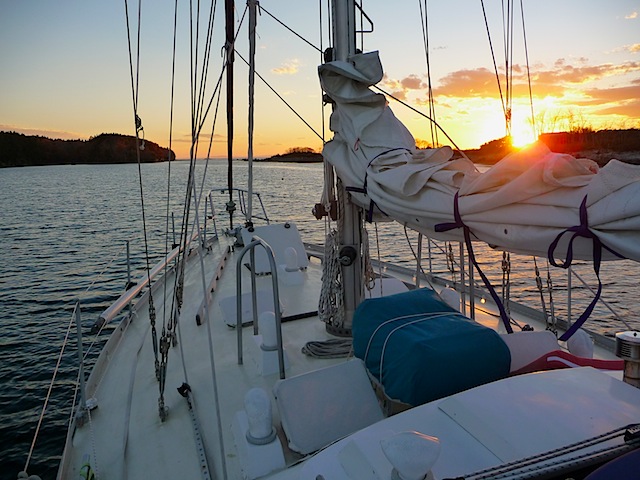 Later, after I lit the cabin heater and started cooking myself a meal (wild rice and lentils with a tossed green salad on the side), I kept sticking my head out the companionway to marvel at the great shotgun blasts of starlight overhead.

Much later, not long before I crawled into my sleeping bag, I stuck my head out the companionway one last time. The stars were still there, blazing away, and the night air bit like cold steel. To the south, on the western shore of the island, a bright warm glow lit up the trees. I blinked a few times to make sure my eyes were working properly. It must be a fire, I thought. A campfire, I guessed. But who had set it?

In the weak-willed light of the morning, when I went on deck to pee, I spied a small red skiff moored at the head of the anchorage.

After breakfast I was tempted to go on a hike and explore the fortress again, but seeing the tide was low I decided instead to perform a seasonal chore. The bottom of the dinghy needed a scrub before being put away for the winter, and Jewell’s hard stone beach was a great place to do it. 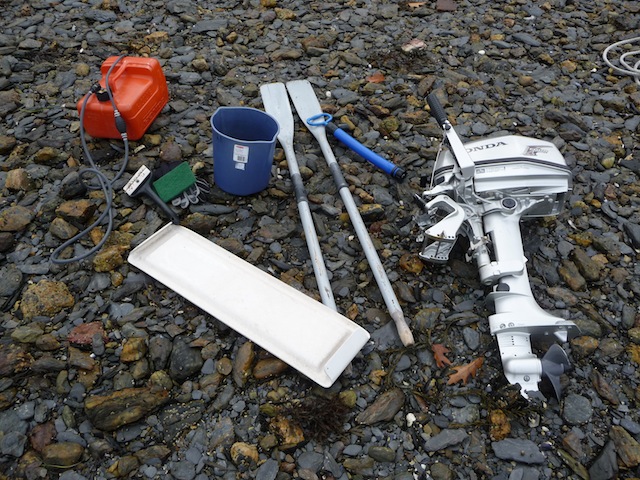 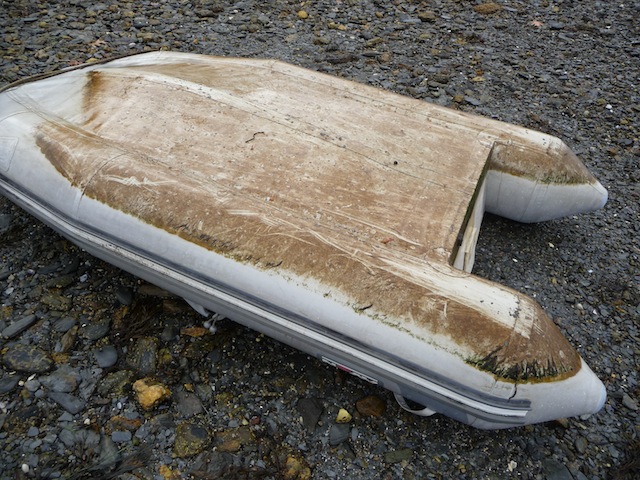 After I stripped the tender and flipped it over, I was surprised at how thin the growth was. Portland Harbor is normally a great place to grow plants on the bottom of your boat. It didn’t take too long to scrub the dinghy this time, and when I was done I looked up and saw the red skiff was puttering down the anchorage. It carried a big pile of camping gear and three young men, who waved and shouted greetings as they went by.