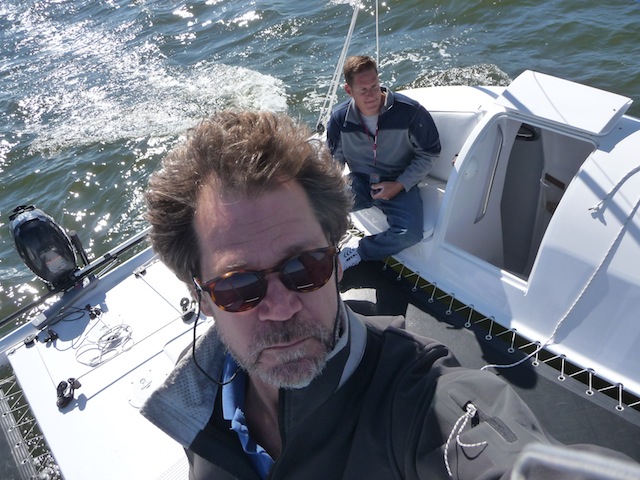 The week following the Annapolis show I returned to the Chesapeake to test-sail four different boats for SAIL magazine. You’ll be able to read detailed reviews in future issues of the comic, but I thought I’d share a little preview of my experience aboard the Radical Bay 8000, the unique new production catamaran with a biplane wishbone rig on which I blogged earlier. The really cool thing about sailing the Radical Bay is that I really had no idea what I was doing. Even the guy who built the boat, Ian Morse, is still unraveling its mysteries.

The mind boggles when contemplating the potential aerodynamic complexities of sailing with two separate mainsail-and-headsail rigs flying side by side. For example: at one point during our test, while sailing on a broad reach, I was a little amazed to see the boat’s leeward mainsail invert and jibe to windward as it got sucked into the backdraft of the windward sail. We ended up sailing for a while in an inverted wing-and-wing configuration, with the wind on our quarter and both mainsails flying inboard of their respective hulls.

“You have to build a model,” I said to Ian, shaking my head in amazement, “and buy some wind tunnel time to figure all this out.”

“No,” he answered laughing. “I need to spend more time sailing this boat to figure it out.”

Here’s a little rundown on what I picked up during an all-too-brief hour spent on the boat:

1. When sailing on the wind the best configuration seems to be two mainsails with one jib flying to leeward. The windward main should be sheeted more loosely than the leeward one. Closehauled the boat can hold a true wind angle of about 45 degrees. During our sail I thought the boat tacked well with a headsail up. The leeward jib backs as it is turned to windward and helps bring the bows around. Once around it is furled and the other jib is unleashed. According to Ian, the boat tacks much less easily under mainsails alone.

3. On a dead run we tried a wing-and-wing-and-wing-and wing configuration–with both mainsails winged outboard and both headsails winged inboard–that was very stable and seemed to work fairly well. Ian had yet to try this and seemed a little surprised by the result. Ultimately, he wants to create some sort of midship spinnaker to fly when sailing deep angles off the wind, but so far sailmakers have been wary of trying to design and build one.

The boat is certainly fast. Of the four boats I sailed during my two days on the bay in what were generally moderate conditions it went fastest (even though at 26 feet it was the smallest boat I sailed) and hit speeds well over 8 knots in 12 knots of apparent wind on a close reach (its best point of sail). Our best speed dead downwind was 5 to 6 knots in 4 knots of apparent wind. Ian has had the boat sailing as fast as 18 knots in 25 knots of wind. In such conditions, he notes, the deck is extremely wet, but the boat never wants to fly a hull.

As on any cat, weight is an important factor. Ian has found performance decreases markedly when the boat is heavily loaded, and I would guess how weight is distributed is also very important. When I skipped forward to one bow to shoot some photos, spray came aboard very quickly and our speed at once decreased. Another factor we didn’t get to play with much during our sail was sail shape. Draft on the two mainsails can be precisely controlled with the wishbone boom mast tracks Ian devised, but exactly how the sails should be shaped relative to each other is still an open question.

Really the best and fastest way to figure out exactly how to sail these boats to their full potential would be to get some one-design competition going. Which obviously would suit Ian fine, if only there were enough bold souls out there ready to plunk down some cash and faith in what is so obviously an uncharted realm of the sport.

Personally, I’m thinking I’d like to run a Radical Bay cat in the Jester Challenge. A 26-foot cat that is both fast and exceedingly stable would seem the perfect weapon to wield in a singlehanded transat race for boats under 30 feet. Everyone I mention this to (including Ian) seems to think I’m crazy. But I reckon if I had a wetsuit and snorkel to wear on deck when the wind gets up I’d do just fine. 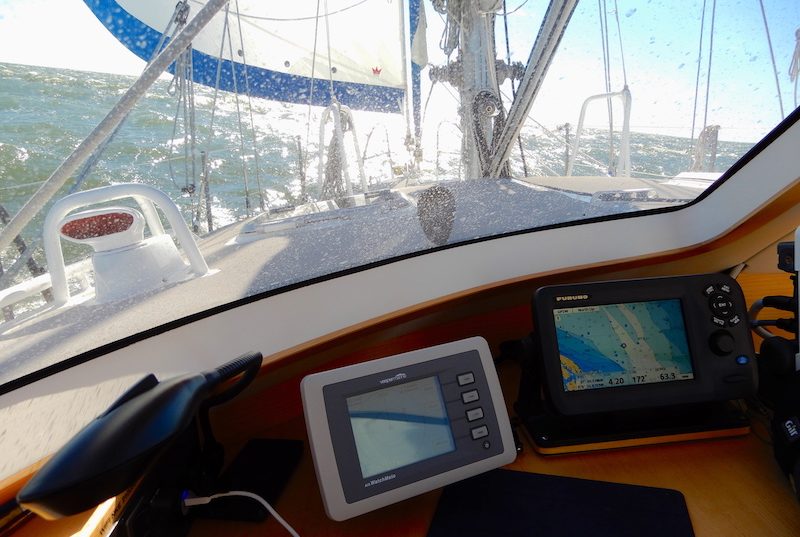 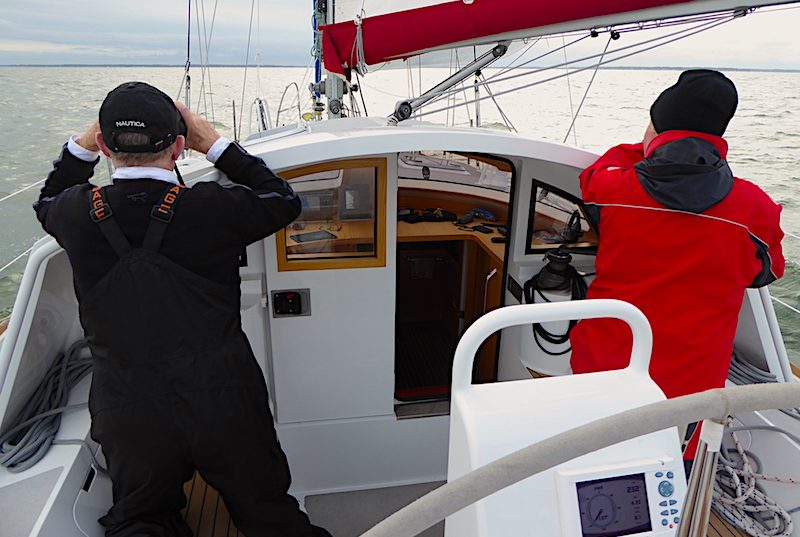 SOUTHBOUND LUNACY: Down Chesapeake Bay and Through the ICW