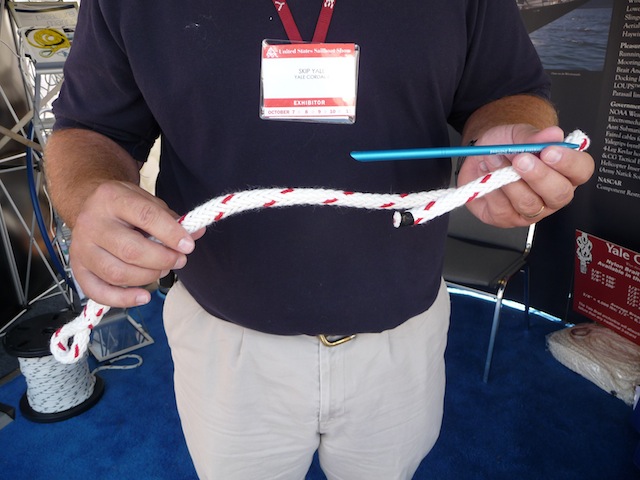 Here’s an impressive item I saw at the Annapolis show last week that may well find it’s way aboard Lunacy sometime in the very near future. I’d already started shopping around a bit for some new headsail and staysail sheets, so I was quite happy to stumble across this stuff. The Ph.D moniker (it officially stands for “Performance handling.Delivered”) is a rather obvious bit of marketing for a company called Yale Cordage, but this really is some smart high-modulus rope.

Most purportedly cruiser-friendly Spectra rope is a double-braid hybrid with a Spectra core for strength and stretch-resistance and a polyester cover for chafe and sun protection and ease of handling. The problem is such hybrids still often feel quite stiff and a bit wire-like and the cover tends to slip over the core, making it necessary to sew the two together in areas of a line that are routinely clamped off in rope clutches. The complicated double-braid construction also makes the rope nearly impossible for most amateurs to splice.

This is a major bummer, because high-modulus rope like Spectra hates to have knots tied in it. Tie a knot in a high-mod line–bending it on to a sail’s clew, for example–and you significantly degrade its load capacity. Most mortal cruisers intent on using Spectra lines thus confront an awful dilemma: pay a rigger to do an awful lot of splicing or just tie knots and lose one of the big advantages of using Spectra in the first place. (This is exactly why I’ve always used all-polyester rope for running rigging on all my boats to date.)

The construction of this new high-mod Ph.D rope is entirely different. Each individual strand of the rope has a tiny Spectra core with a tiny polyester sheath over it, which makes it possible to a build a nice single-braid rope that any idiot with a fid can splice in two minutes. Talking to Skip Yale at the Yale booth, I asked about taking sheets off of sails at season’s end. Would I have to cut the line, or could I pick the splice apart? In this case Skip recommended simplifying the splice even more: just use a fid to thread the line down into its own hollow core and leave it at that. He insisted this would still be much stronger than a knot and would be easy to pick apart, even after being heavily loaded.

Personally, I’d worry a bit about such a facile splice coming apart when a sheet was flogging around with no load on it. But this I reckon would be easy to prevent by just whipping some light stuff around the splice. The whipping could be easily cut away when it was time to undo the splice.

The other very nice thing about this Ph.D rope is that it is sweet to handle. It is extremely pliant, not at all stiff, and is soft to the touch. Its soft, slightly fuzzy texture not only feels nice, but also makes the rope grippy on winches and minimizes slipping on those occasions when you do feel compelled to tie knots in it. Its supple construction also keeps it from hockling and kinking up like many double-braid ropes do.

And what’s the catch? I hear you cry. Just this: Ph.D rope is not available in solid colors. I really have my heart set on getting headsail and staysail sheets in contrasting bright, bold colors so I can instantly tell them apart in my tiny spaghetti-strewn cockpit when all hell is breaking loose in the dark of night.

As in all things having to do with boats, it seems like I’ll still have to compromise somewhere.

PS: Here’s a Ph.D single-braid splicing diagram I pilfered off Yale’s website. Follow the link here if you want to read the written instructions, too.