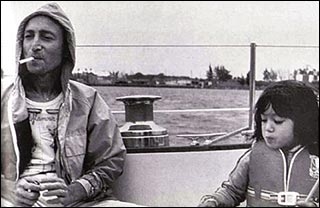 What did it take to get ex-Beatle John Lennon off his butt and back into a recording studio? A little dose of the Big Blue is what. Evidently, it was only after Lennon indulged a lifelong desire to learn to sail, and after he crewed aboard a 43-foot Hinckley sloop bound for Bermuda in June 1980, that he summoned up the raw inspiration that led to the recording and release of his last album, Double Fantasy, later that year.

This titillating tidbit of music trivia is bubbling up into the public consciousness again thanks to the passing of Lennon’s 70th birthday on Saturday. The folks at Paste yesterday posted an old print article about the auctioning a few years ago of the logbook of Megan Jaye, the boat Lennon crewed on. I also found a much more informative article that journo Chris Hunt published in Uncut about the same time that includes lots of inside detail on the Double Fantasy recording sessions. Here’s a shot of the logbook, in which Lennon scribbled a salutation or two: 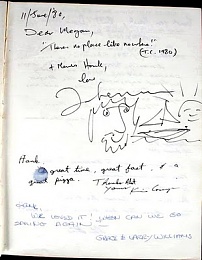 Not surprisingly, the true source of Lennon’s inspiration during his passage from Newport, Rhode Island, to Bermuda was a big dose of bad weather. A few days of hand steering in 40-knot winds and 20-foot seas after most everyone else aboard got seasick was all it took to transform the ex-Beatle from a pale househusband back into a world-class rock-and-roll superstar.

“I would venture to say that he discovered the tremendously strong man who had always been there,” said Hank Halsted, who skippered Megan Jaye on the passage. “It was a cool thing to watch, a metamorphosis that occurred.”

I’ve seen the same thing happen to a dozen other people in the square waves of the Gulf Stream halfway to Bermuda. Though none ever went on to release a best-selling pop album as a result of the experience, a few did become hardcore bluewater sailors. The closest historical analogy to Lennon I can think of would be John Newton, who abandoned a life of slave-trading and sin and found religion and wrote that amazingly beautiful hymn Amazing Grace after surviving a dreadful storm at sea in 1748.

Meanwhile, over in the Six Degrees of Separation department, we should note the following:

I once did a delivery on a Jeanneau 49 from Newport to Huntington, New York, with Tyler Coneys of Coneys Marine, who was Lennon’s sailing mentor and also crewed with him on the 1980 passage. I am afraid I did not find religion or release an album after sailing with Tyler. Indeed, I seem to recall he was rather annoyed with me for pissing in the toilet (not done, it turns out, when delivering brand new boats on short passages) and for cutting inside a buoy on the approach to Huntington Bay.

I discussed the 1980 passage with Tyler recently, and he told me that Lennon’s numerologist had a lot to say about the composition of the crew. 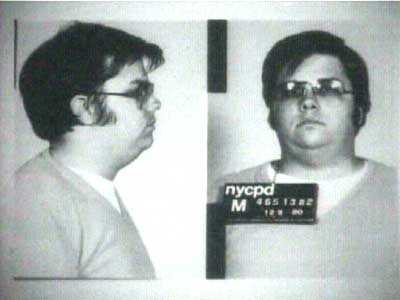 Also, I just happened to drive by the Dakota on West 72nd Street on December 8, 1980, less than two hours before Mark David Chapman assassinated Lennon as he entered the building. A little fact that has always haunted me, as I figure Chapman had to be standing there as I drove through, waiting patiently for his prey.