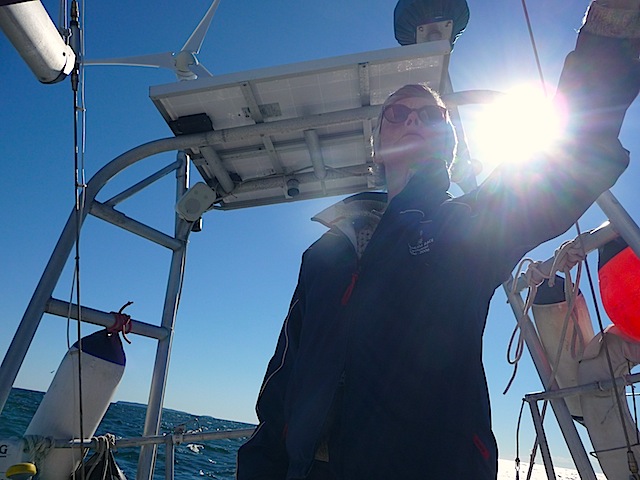 Not long after Lunacy got back in the water with her new Ultrasonic Antifouling system, fresh bottom paint, and a few other goodies (like a new stereo!), Clare and I at last managed to take almost a whole week off to embark on a short cruise together sans children. We’d been trying to organize this all summer, but had been repeatedly thwarted by the Dogs of Employment and Parental Responsibility. Having finally evaded the curs, we elected to swoop all the way over to Rockland, on the west side of Penobscot Bay, to check out some of our old stomping grounds.

After laying for a night at Chandler Cove, just north of Portland, we lit out early in the morning for parts east. The wind was northerly, a bit light at first, but steadily it grew stronger and before long was blowing an honest 25 knots. Cutting against this was a very strong swell from the southeast sent our way courtesy of Hurricane Igor, who was on his way to molest Newfoundland. This created some very confused seas, particularly west of Monhegan Island, where suddenly we lost our self-steering.

Turned out the servo oar on the Aries windvane got shoved around so much by the ugly seas that the little bit of teak I use to connect my little electronic tiller-pilot to the head of the vane snapped right in two, as you can see here: 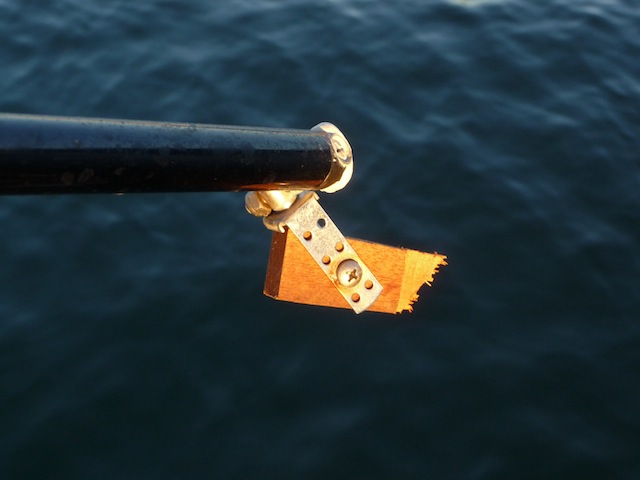 This isn’t the first time this has happened. But it is the first time it’s happened due to anything other than my own stupidity. (I sometimes forget to unlock the vane head before activating the pilot, in which case it is the pilot’s ram, rather than the sea state, that does the dirty work.)

So we ended up hand-steering the last part of the day, which saw us sailing closer and closer to the wind once we were east of Monhegan. In the end, after what we agreed was a very “vigorous” sail, we put into Tenants Harbor for the night, where it was gloriously peaceful. 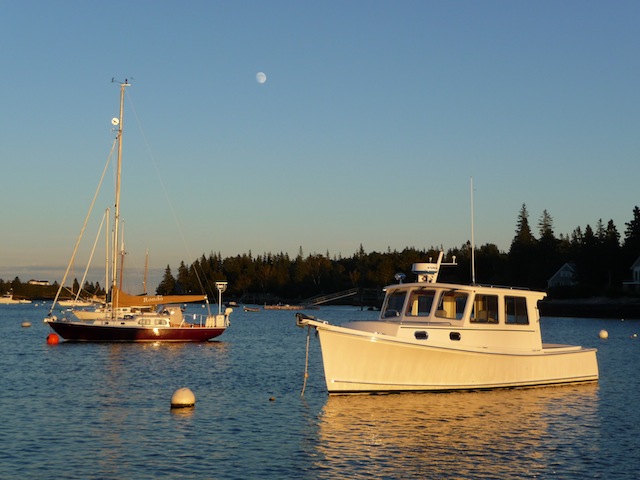 The next morning I replaced the windvane’s teak bit with a spare and we enjoyed a marvelous sail up to Rockland, reaching up the bay on a moderate westerly, then beating into the harbor proper. 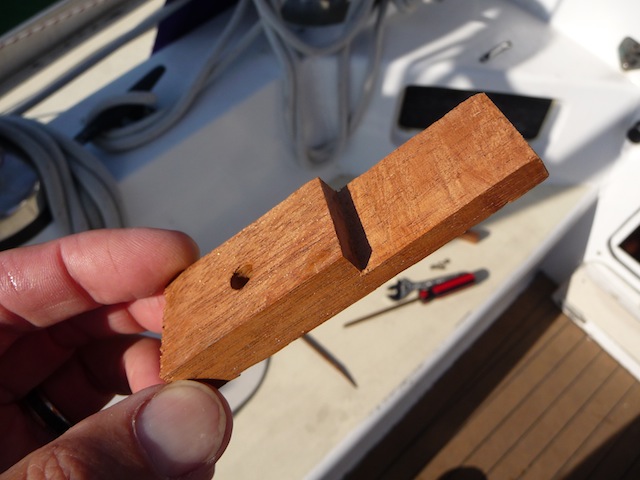 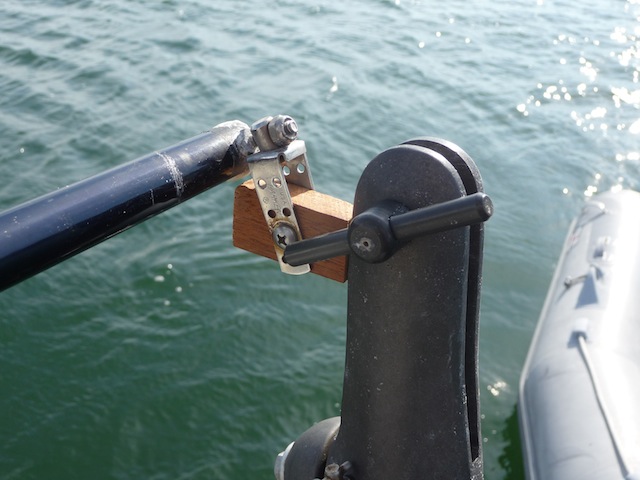 Rockland is by far the largest harbor on either side of Penobscot Bay and as such is a great base of operations for anyone looking to explore the area in detail. There’s plenty of room to anchor, lots of available moorings, and tons of facilities. On shore you’ll find two boatyards with Travelifts, three marinas, a well-stocked chandlery, a canvas guy, a sailmaker, and more besides. 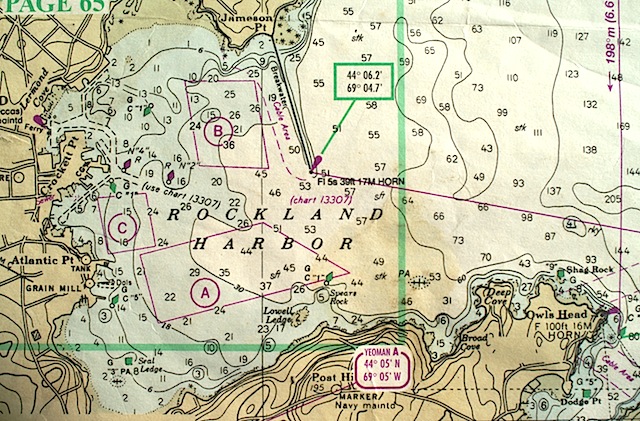 Though we originally intended to revisit some more remote anchorages in Penobscot Bay, the attractions of Rockland, combined with a vaguely ominous weather forecast, inspired us to stay put for the duration of our time in the area. It wasn’t so long ago that Rockland, with its fish and seaweed processing facilities, plus a semi-cranky sewage treatment plant, was one the least attractive communities on the bay. But now it is a veritable hotbed of artsy-foodie trendiness. The presence of the Farnsworth Museum, home base for the Wyeth family for many years, has at last spawned a great proliferation of ancillary art galleries. Plus the number of restaurants serving truly fabulous food has metastasized in recent years. There are any number of hip post-modern retail joints, with just enough of the town’s old-world working-class veneer left over to keep things looking honest.

Of course, one of the things I’ve always liked best about Rockland is that it’s a great place to do a bit of serious boat watching. There are usually any number of unique and/or cool boats loitering about in the mooring field or on the hard. One of these this time around was Plumbelly, which I saw at distance strapped alongside a schooner and could not get close enough to to photograph. I gather, however, she is still for sale, if you’re in the mood for a micro-gaffer adventure. 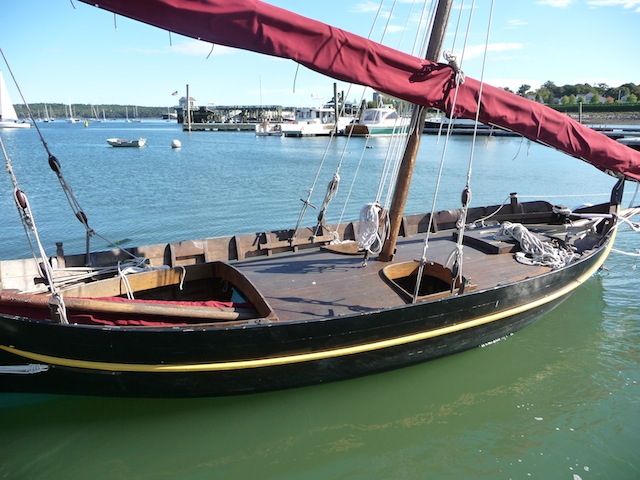 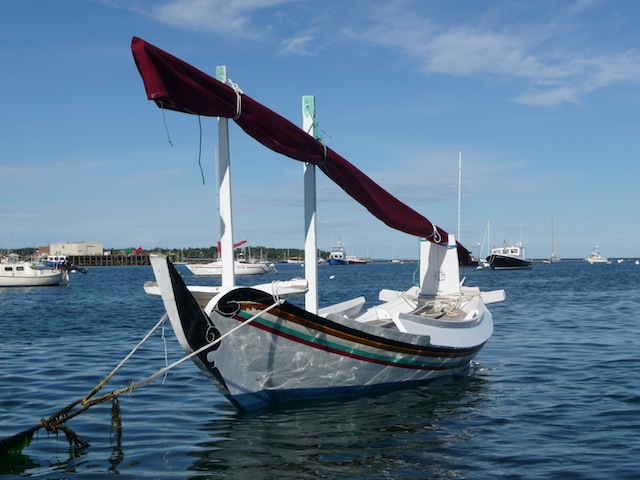 And a steel Tom Colvin schooner named Memory I’d met before down in Florida many years ago. I spoke with the guy who lives aboard her now in the yard at Knight Marine and learned she is in the midst of a slow-motion refit that’s been going on for six years: 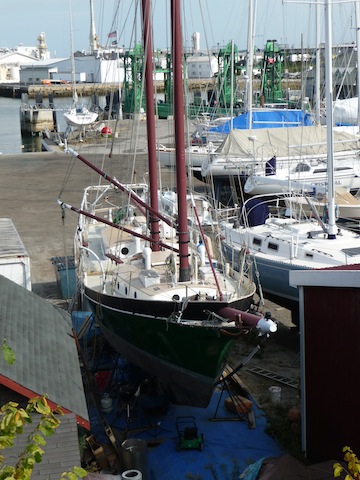 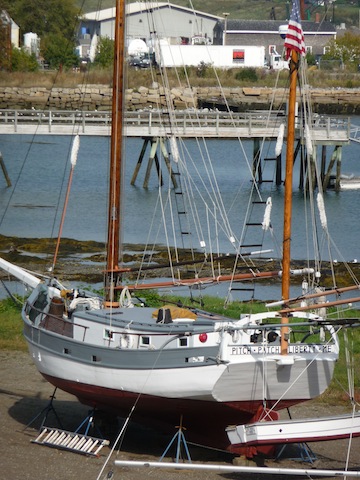 Another feature on the waterfront that was new to me was this somewhat scaled down cruise ship, which now visits Rockland from time to time and lays on the town dock, which is a bit like parking a tractor-trailer in a bike rack. 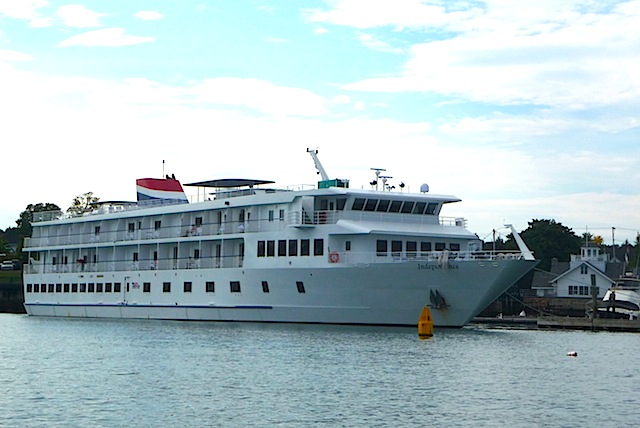 But somehow they make it work.

Our most ambitious venture while in Rockland was hiking all the way around the harbor from downtown out to the end of the very long breakwater and back. 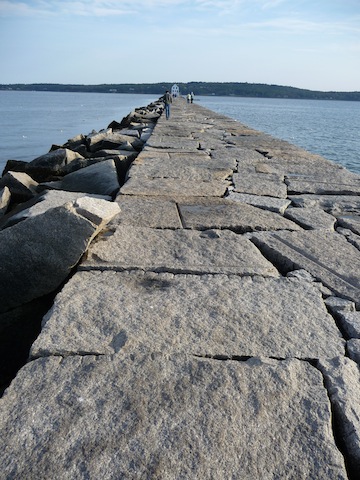 In the end we reckoned this was about a six-mile hike. Definitely a Bengay moment for our hero.