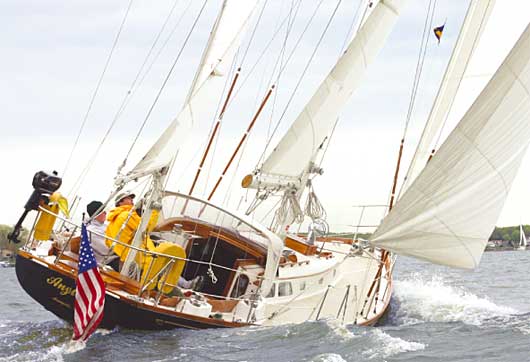 With its classic long overhangs, perfectly pitched sheer line, wide side-decks, graceful cabin profile, and distinctive near-vertical transom, the Bermuda 40 has inspired severe lust in the heart of many a cruising sailor. Designed by Bill Tripp, Jr., it is without doubt one of the most attractive production sailboats ever conceived. The B-40, as it is often called, was the very first fiberglass boat ever created by the famous Hinckley Company of Southwest Harbor, Maine, and was also one of several CCA-era keel-centerboard yawls built on a production basis after the great success of Carleton Mitchell’s famous yawl Finisterre.

Unlike its contemporaries, the B-40 endured for a very long time, surviving both the advent and demise of the IOR regime that supplanted the CCA rule in the early 1970s. The first of these gorgeously proportioned hulls slipped down the ways in 1959. The very last hull, number 203, was launched over three decades later in 1991. So far this is the longest production run enjoyed by any fiberglass auxiliary sailboat anywhere in the world.

Three distinct models of the boat were produced over the years. The original iteration, known as the Bermuda 40 Custom, was replaced around 1968 by the Mark II model, which boasted a bit more sail area and a re-shaped foil centerboard. The longest lived model, the Mark III, introduced in 1972 in response to the new IOR rule, incorporated more significant changes. Even more sail area was added, as the mast was stretched four feet up and moved aft two feet to create a more modern high-aspect mainsail and a larger foretriangle for headsails. More ballast was also added and a sloop rig was offered as an option. 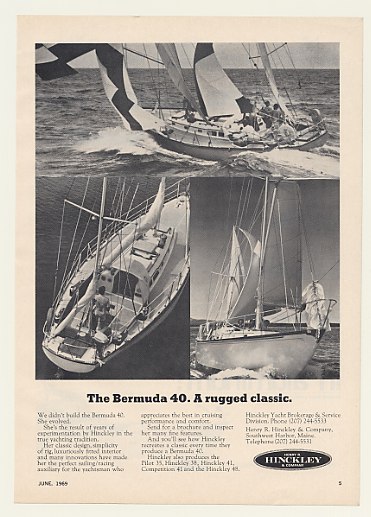 Like other CCA production boats introduced around the same time, the B-40 is very robustly constructed. Unlike its contemporaries, however, the B-40 also boasts outstanding finish quality and superb joiner work and is fitted with many components–much of the stainless-steel hardware, all spars, the steering pedestal, etc.–that were manufactured by Hinckley to its own exacting standards.

The hull in all versions is solid fiberglass laminate, though in the last boats built a more exotic hybrid Kevlar/E-glass knit fabric was employed. The two early models have solid glass decks; the Mark III boats were built first with balsa-cored decks, then later with foam-cored decks that were vacuum-bagged. The strength of the deck joint is legendary. It consists of an inward flange half an inch thick and six inches wide that is both laminated and through-bolted. Hinckley crews reportedly spent two days on average making sure the fit between hull and deck was perfect before marrying the two parts together. All bulkheads are tabbed to both the deck and the hull.

All deck hardware is well bedded and mounted over generous backing plates, with stainless-steel machine screws tapped through the deck and into the plates to minimize the potential for leaks. The ballast is external lead, mounted on stainless-steel bolts at the front of the keel. The centerboard is cast bronze and is controlled by a very reliable worm gear with an override mechanism that permits the board to kick up in a grounding.

Compared to any modern sailboat the B-40 has a small interior, though in its day it was considered quite spacious. Hinckley purported to build custom interiors, but variations from the norm are in fact relatively minor. Most boats have a standard CCA-era racing lay-out with a V-berth forward and a saloon with pilot berths outboard on either side, narrow settees that pull out to form extension berths, plus a fixed centerline drop-leaf table. The galley is aft, ranged around the companionway, with the top of the icebox doubling as a nav desk. 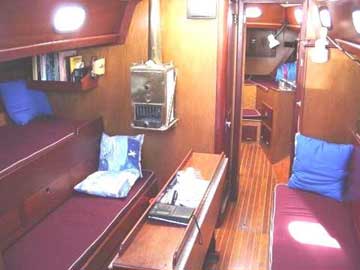 The rode locker in the forepeak, complete with shelving, is very large, as are the two cockpit lockers and lazarette all the way aft.  The cockpit lockers, notably, are fully gasketed and can be secured from inside the boat–a very seamanlike feature. Alternative lay-outs featuring dinette tables and dedicated nav stations are seen on several of the later Mark III boats. A few examples also have double Pullman berths forward.

As far as performance goes, the B-40 in its prime was a competitive racer but these days must be considered relatively sedate under sail. As with any CCA design, it is not nearly as slow and heavy as its exaggerated D/L ratio might suggest. The boat tracks well with its centerboard down and has a light helm but is initially a bit tender, heeling quickly to 15-20 degrees before it firms up and builds forward momentum. Thanks to its long shoal keel the boat is reportedly a little slow to tack and needs to be babied a bit through the eye of the wind, but it is also reasonably fast once the wind is on or behind the beam. The B-40’s motion, as with most boats of this type, is regular and smooth, thanks to its heavy displacement and full keel. These features also, unfortunately, make it a difficult boat to back down under power.

Though a few of the very earliest B-40s came equipped with gasoline engines, most had diesel engines installed at the factory. Hinckley was one of the very first builders to put diesels on its boats as standard equipment. By now the vast majority of older B-40s, whatever engine they had originally, will have been repowered. It makes some sense to look for a boat where this has happened recently, as the engine space and companionway are cramped and repowering is a difficult job. Note, too, that the original Monel fuel tank is directly under the engine, hence cannot be replaced or repaired without removing the engine first.

Compared to any other CCA-era boat, a used B-40 is undeniably very expensive to buy. An appreciation of the boat’s great beauty and of the quality of its construction is required to justify this, as one could easily buy a brand new boat that sails faster and has more living space for about the same price or even less.

Still, I feel the B-40 is an excellent value. It serves well as both a coastal or bluewater cruiser and is excellent in shoal-water grounds such as Chesapeake Bay or the Bahamas. Most examples that come on the market are in very good condition, as it takes a very callous owner to neglect a boat like this. Equipment lists are usually very current, and a few boats even boast such major conveniences as in-mast mainsail furling and electric winches. In the long run, too, precisely because they are so beautiful and well built, a B-40 will hold its value much better than most comparably priced new boats. 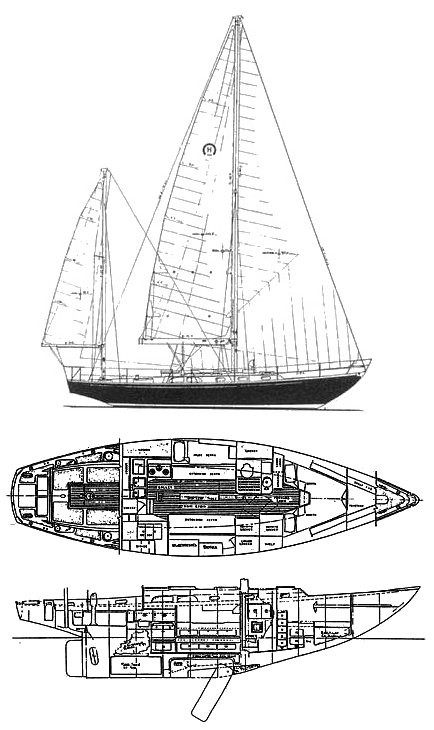