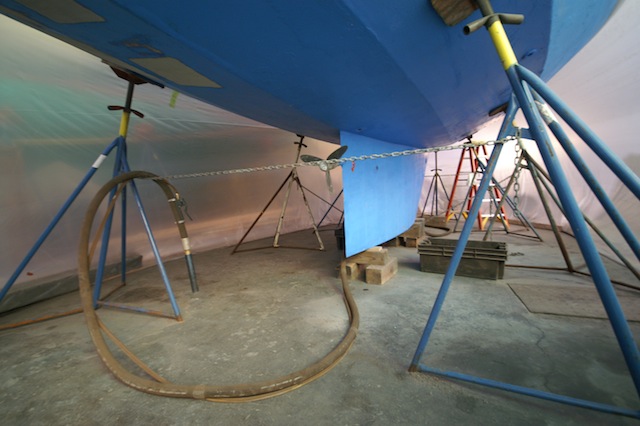 Soon after I purchased Lunacy and brought her north late in the summer of 2006 it became painfully obvious I would have to do something about her anti-fouling paint. On surveying the boat in Florida her bottom seemed reasonably fair with good paint adhesion. But soon after I hauled her out in Maine that fall to store her for the winter, the paint started flaking off in alarmingly huge chunks.

There was much speculation around Portland Yacht Services, where I stored the boat, as to what the cause might be. Some theorized it had to do with the big change in water temperature the boat had experienced, having come from Florida, where it spent many years, to Maine, where the water rarely gets as warm as 60 degrees F. Others believed it was the inevitable result of over 20 years accumulation of non-ablative paint. (On checking with the previous owner, I learned he had in fact never stripped the boat’s bottom since first launching it in 1985.) Most likely, I think, it was a combination of the two.

My first full season owning Lunacy I simply ignored the problem. In the spring I scraped off as much loose bottom paint as I could, did a bit of sanding, slapped on a fresh coat of something or other, then went sailing. The following winter, however, I resolved to remove all the old paint and start anew.

My initial plan was to have the boat soda-blasted down its barrier coat and rebuild from there. For those unwilling to either sand off old bottom paint, which is painfully labor intensive, or strip it off with chemicals, which is toxically offensive and messy, soda blasting is currently the method of choice. Unlike traditional sand blasting, which is overly aggressive and chews up the gelcoat on a fiberglass hull, soda blasting is very effective, but still gentle enough to leave gelcoat intact. The media used, which is simply bicarbonate of soda (i.e., baking soda), is non-toxic and silica-free. Because it is water soluble and non-hazardous, the media itself can be rinsed away from the material blasted off a hull, thus greatly reducing the volume of waste requiring disposal.

Theoretically, it is possible to do a DIY soda-blast with rented equipment. Most boatowners, however, hire professionals, which is wise, unless you already have experience using blasting gear. Though soda is indeed a gentle media, it can still do serious damage to a gelcoat substrate if poorly handled. Besides, hiring a pro in most cases is not prohibitively expensive. For example, Stacey Stone, who runs Chesapeake Soda Clean and blasts between 70 to 80 boats a year, claims he can prep and blast a typical 40-foot glass hull in a single day for about $1,600.

But soda-blasting, I learned, is not the only game in town. Our local blasting expert in southern Maine, Joe Sharpe of JS Boatworks, came to have a look at Lunacy and quickly announced he thought sponge-blasting was the way to go. I was unfamiliar with the concept and wondered: How the heck can you “blast” anything with a sponge?

But the sponge, it turns out, is only a vehicle. The media in fact consists of tiny chunks of synthetic sponge that are impregnated with various abrasive substances and cleaning agents, from aluminum oxide to steel grit to calcium carbonate to glass beads. In all there are nearly 20 different configurations, which affords a great deal of flexibility. Where soda ranks at a lowly and comparitively soft 2.5 on the Mohs hardness scale (originally formulated for use in the diamond industry), sponge media can range anywhere from 2.5 to a nice hard 8, depending on what substance is utilized. Abrasiveness can range anywhere from 16 to 500 grit. This makes sponge-blasting appropriate for anything from delicate historical restoration work to heavy-duty rust and scale removal.

What further enhances the controllability of sponge blasting is the nature of the vehicle itself. Where most blasting media, including soda, typically fracture on striking the target surface, thus creating lots of dust, and also rebound quite a bit, which causes collateral damage to surrounding objects and features, sponge flattens against its target surface on impact, captures a good bit of the material being blasted off the surface, keeps the impregnated media intact, and greatly reduces rebound.

This has several salutary effects. First, there is much less dust. Sponge Jet, currently the only manufacturer of sponge-blasting gear and media, claims there is a 90 percent reduction in dust compared to most other blasting methods. Joe Sharpe says it’s more like 80 (including compared to soda blasting), which is still mighty impressive. Second, the media can be recycled. A big part of any sponge-blasting job involves shoveling spent media into a sorting machine that shakes the bejesus out of the little dirty sponges and separates contaminants from reusable media. Depending on the job, the media can be recycled from 3 to 15 times. In that sponge media is expensive, costing between $85 to $100 a bag (compared to about $23 a bag for soda, or even less for a more primitive media), this is very important. 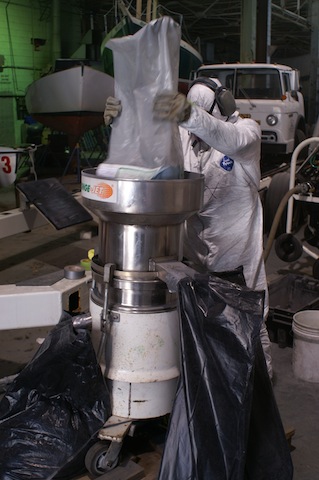 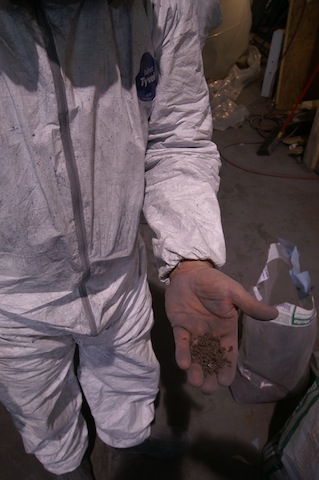 Third, because there is much less rebound with sponge, it can be used in jobs where blasting must be performed in close proximity to fragile features. For example, Tony Anni of Sponge Jet, who tells me sponge-blasting is currently making big inroads in the superyacht market, described a recent job in which a large yacht needed its topsides and superstructure stripped and recoated. In a situation like this, Anni explains, where windows, brightwork, and other features cannot easily be removed, sponge-blasting is ideal. Another advantage, points out Sharpe, is that less rebound is much easier on the operator. Where an aggressive blast with a media like sand or steel grit requires a user to wear leather for protection, an aggressive sponge blast can be performed in a light Tyvek jumpsuit.

But can sponge be used on fiberglass? For most boatowners this is a dispositive question. The answer is yes: sponge can be every bit as gentle as soda, if not more so. But in most cases with a glass boat, Joe Sharpe points out, soda blasting is preferable. Soda blasting, he explains, is normally faster than sponge blasting in this application; soda is also greener, and it is easier (and cheaper) to dispose of the waste.

One big reason Joe wanted to sponge-blast my boat was that somewhere in there, as often happens, Plan A morphed into Plan B. Eric Thibodeau of PYS, who ultimately would be responsible for recoating Lunacy‘s bottom once it was stripped, didn’t like my idea of leaving the old barrier coat in place. Lunacy‘s original owner couldn’t remember exactly what he put on way back in 1985, but guessed it was some sort of coal-tar epoxy. Eric, understandably, didn’t want to build a new surface on top of an unknown quantity, but preferred to go down to bare metal and start again from scratch. This made a lot of sense, so in the end I gave a thumbs-up for a “down-to-the-bone” blast job.

This meant the bare aluminum needed some sort of profile in order to accept a new barrier coat. And Joe’s rule of thumb when choosing a blasting media is fairly simple: if no profile is required (as when stripping a glass boat down to gelcoat) he prefers to use soda; when a profile is called for, he likes to use sponge, as it affords more control. In my case, where we wanted to achieve a profile of somewhere between 2 to 4 mil, Joe selected a mix of 60- and 80-grit Silver Sponge media impregnated with aluminum oxide. 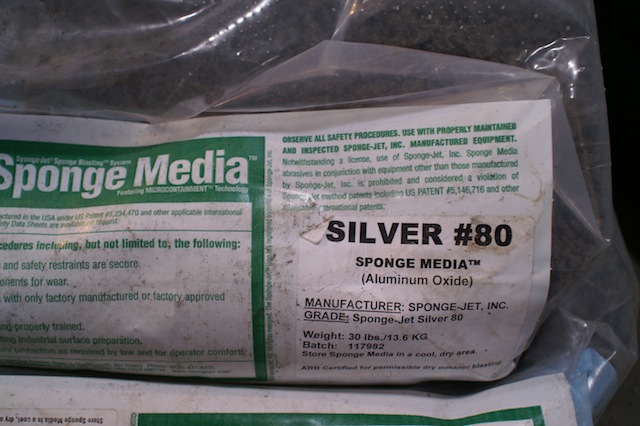 There was just one problem. Whatever that original barrier coat was, it was extremely tenacious and did not want to come off. Where originally we had hoped to get the job done in two days–one day to prep and one full day to blast–it in fact took a full week of blasting, well over 40 hours, to get all of Lunacy‘s bottom down to bare aluminum. No one was very happy about this. For Joe it was frustrating and tiring to have to work so slowly. For me it was very expensive. For PYS, which provided the venue for the job, it proved a bit messy.

For even though sponge blasting generates 80 to 90 percent less dust than other methods, there is still an awful lot of dust leftover in that remaining 10 to 20 percent. Don’t think for a minute you can sponge blast a boat in the open air in close proximity to dwellings or other vessels. We blasted Lunacy inside a PYS storage shed and had fully tented her nether regions. But toward the end of the job, as Joe and his crew grew weary and got a little sloppy about securing the tent, enough dust escaped and settled on other vessels nearby that the PYS management took notice and complained.

Inevitably I found myself pining for the road not taken. Certainly it would have been much cheaper and easier to leave the old (and obviously very effective) barrier coat in place. I consoled myself with research. Coal-tar epoxy, I learned, can be very difficult to recoat in some situations. So ultimately there was no guarantee Plan A would have been any less painful.

Now, at least, Lunacy‘s bottom was as fresh and unblemished as the day she was born. My next problem was: what paint should I put on over it???