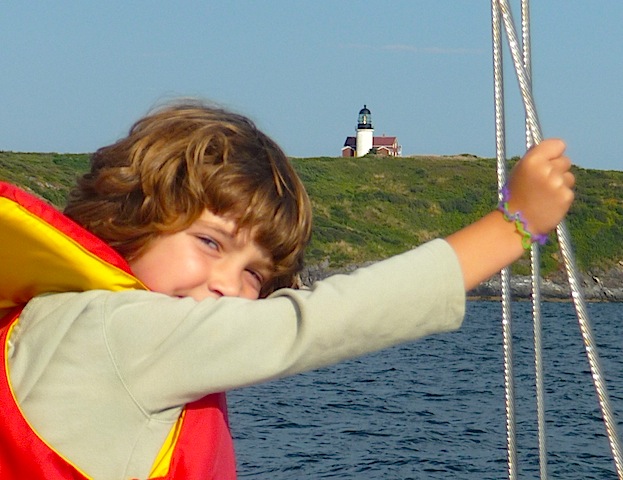 Just past Small Point at the western boundary of Casco Bay lies Popham Beach and the entrance to the Kennebec River, which, as I’ve mentioned before, is where I first started messing around in boats as a boy. We usually visit friends there during the summer and this year decided to sail Lunacy over for a weekend. We also decided, on the sperm of the moment, to stop at Seguin Island for the night before negotiating the river entrance the following morning.

There were several reasons for this. First, it was getting late and the tide, which runs very hard in the Kennebec, had starting ebbing with a vengeance. Second, Seguin is a nostalgia-laden destination for me, and I’ve always enjoyed putting in there. Lying three miles out to sea, it once marked the outer limit of my nautical universe and spending a night there still feels a little like a trip to the moon. Finally, just three months after our daughter Lucy was born, Clare and I took her out for a two-week cruise aboard Sophie, my old Golden Hind 31, and Seguin was one of several places we went ashore with her. We thought, therefore, it might be fun to take her again, now that she is all of five years old.

Glancing at a chart you wouldn’t think that Seguin seems a propitious place for an overnight. There is a small cove facing north, in which you are not allowed to anchor, because through it runs the underwater cable that powers the lighthouse atop of the high hill that is the island’s primary topographic feature. But there are two heavy-duty Coast Guard moorings (at least they look heavy duty) and usually one or two lighter ones. Though the cove is well protected from the prevailing southwesterlies of summer, it is quite open to the east, and usually there is a considerable amount of swell sneaking in from this direction. 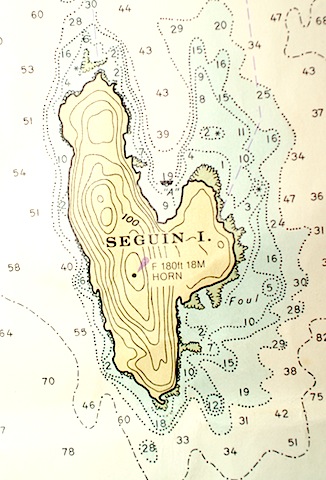 We arrived in the early evening and found that a small Pearson sloop had already picked up the sturdiest of the lighter moorings right in the middle of the cove. We therefore picked up the more easterly Coast Guard mooring, as it was furthest from the Pearson, and immediately hustled ashore to visit the lighthouse. 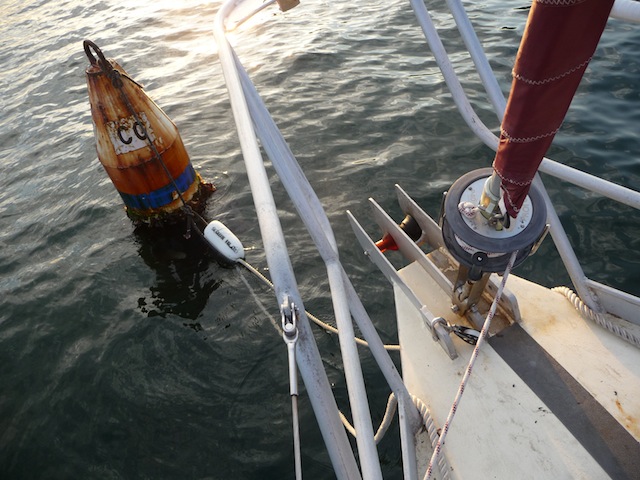 When I was a boy Seguin light was manned by the Coast Guard, but now the light itself is automated and the lighthouse and the island are overseen by a non-profit group, the Friends of Seguin, who send caretakers to maintain the house and receive visitors each summer. As we hiked up the hill to visit this year’s caretakers, I told Lucy a rather grim story my grandmother once told me about the very steep wooden tramway that runs from the lighthouse down to the cove.

One day, the story goes, the lighthouse keeper’s wife and baby daughter were riding the tram down to the cove when its cable broke. The tram car flew down the rails at very high speed, and to save the situation the lighthouse keeper’s wife flung first her baby then herself from the car before it smashed into pieces at the bottom of the hill. Both fortunately survived, as has the ramp, though it is in disrepair now and visitors are prohibited from using it.

As I expected, Lucy, who is fascinated by tragedy and evil, did not find this story particularly disturbing. She did ask, however, where the lighthouse keeper was when all this was going on.

Another thing I always think about when visiting Seguin is the summer my grandmother died, during which there was a fire on the island. My grandmother lived in a house right at the river mouth, and the smoke was clearly visible from her dining room window. She was quite attuned to all activity on the water and noticed it immediately. I happened to be visiting that day and my presence made it possible for Kathleen, who was helping to care for my grandmother, and Dickie, who was there to mow the lawn, to jump into Dickie’s skiff and rush out to help battle the blaze. It was, unfortunately, the last day I saw my grandmother alive. 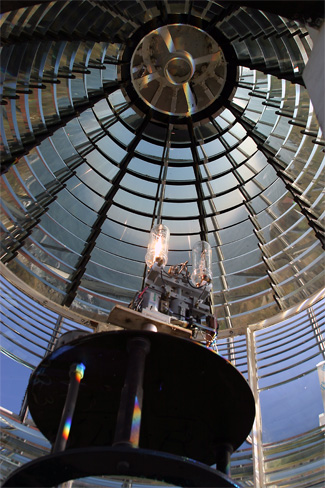 Our night aboard Lunacy in the cove, alas, also took a tragic turn. I fully expected that if the moderate southerly wind went slack I might have to get up to fend off our mooring, which was essentially just a big steel nun with a ring on top for making lines fast. Sure enough, about 3 a.m. I heard a metallic clanging at the bow and went on deck with a boathook to prod the buoy away from the boat. As soon as it seemed likely it might keep its distance, I slunk below into my berth again.

A bit later I heard another loud noise, only this time it was coming from the stern rather than the bow. WTF??? I rushed back on deck and found that Lunacy‘s transom was hard up against the rocks on the east side of the cove. It was low tide now, the wind had switched to the west, and evidently our mooring had dragged a bit or had too much scope. There was still quite a bit swell arcing into the cove, and each time the stern heaved up and down I could hear Lunacy‘s rudder and skeg grinding away on the rocks beneath them. An awful sound indeed.

I at once went forward and pulled our mooring pennant up as short as possible to get the stern clear of the shore. In a moment Clare was on deck, wondering what was going on, and together we shifted Lunacy from the easterly Coast Guard mooring to the westerly one. This put us a bit close to the other boat, and I spent the rest of the wee hours sitting in the cockpit keeping an eye on things. Round about 5 a.m. Lucy, who slept through all the excitement, roused herself from her berth and announced she was ready to begin her day.

Someone please remind me of all this next time I make silly pronouncements about how much better I sleep while afloat.

I did notice that Lunacy‘s rudder immediately seemed to be binding a bit after getting cozy with those rocks, but I didn’t see anything palpably wrong with it when I stuck my head underwater to check for pot warps on the way home from Popham two days later. When I hauled the boat last week, I found the rudder heel was a little messed up, but not too badly. Seems the bolts securing it to the skeg had stripped their threads and that the slight misalignment of the heel is what caused the rudder to bind. The lower trailing edge of the rudder also got slightly bent, plus there’s a small crack in the weld at the front of the skeg where it meets the hull. 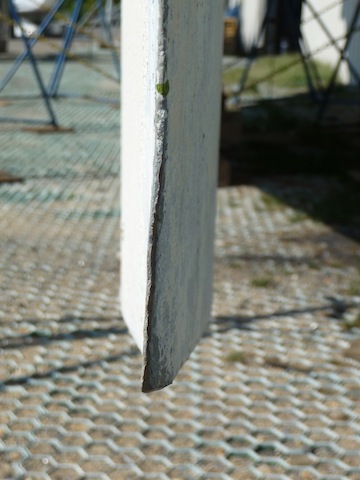 Fortunately, the crack did not penetrate the weld and the skeg is still watertight. Even more fortunately, the folks at Maine Yacht Center tell me they’ll have no problem getting a welder on site to address these issues this week.

So as of this moment I’m hopeful Lunacy will be back in the water next week as planned.

Given the title of this missive, I suppose I should also provide some cruising intelligence re Popham Beach. I have rarely, if ever, seen transient boats stop here, but there are in fact several good reasons to do so. Fort Popham itself is worthy of exploration, as is Fort Baldwin, on the hill in the woods overlooking the village. Fort Popham was constructed during the Civil War, but was never finished, as it was rendered obsolete overnight by the invention of the explosive artillery shell. Fort Baldwin, which has massive gun emplacements, was manned during World War II. According to my grandmother, the gunnery officers were very polite and would call and warn her before gunnery practice so she could take her good china down from the wall.

History buffs no doubt will be intrigued to learn that Popham was the site of the first English settlement in North America (it did not survive) and that the first ship ever built by Europeans in America was also constructed here (the 30-ton pinnace Virginia, in which the Popham colonists fled home to England after one miserable winter). But really the main attraction is the beach. It is seven miles long, with spectacular views, is still relatively undeveloped, and is without doubt the best walking beach in all of Maine. 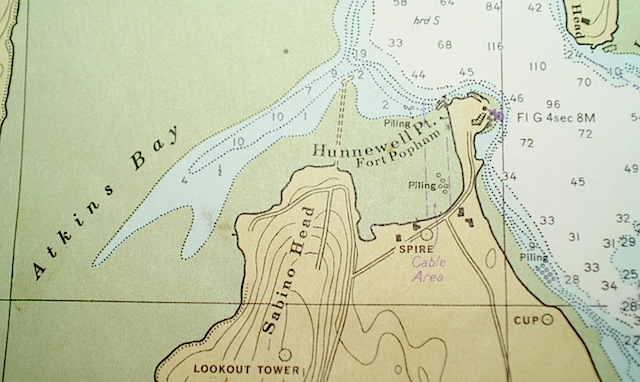 The anchorage at Popham is unfortunately a bit sketchy. If you arrive at high tide, you might be fooled into thinking there’s fabulous protection in the cove behind the fort or in Atkins Bay. But if you look at the chart you’ll see both are mudflats at low tide. There’s a thin verge of anchorable depths that are out of the tidal current, or nearly so, on the edge of the bay, and in one tendril of deep water leading into it, but these areas are usually taken up by moorings. You may find space to anchor in amongst the moorings, but normally the best bet is to lie on a vacant one.