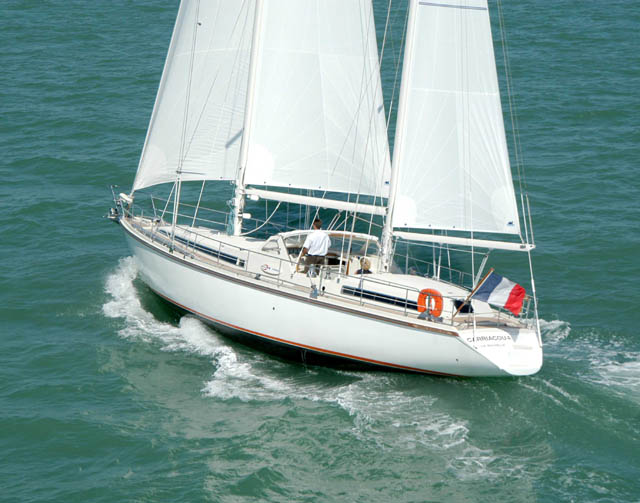 Boats produced by the French builder Chantiers Amel occupy a very unique niche in the cruising sailboat market. The company founder, Henri Toncet, who changed his name to Henri Amel while serving with the French resistance during World War II, became a pioneer of fiberglass boatbuilding in Europe after studying floating pontoons built of polyester-impregnated burlap that had been deployed by Allied invasion forces. Amel emerged from the war crippled in one leg, missing one eye, nearly blind in the other, but possessed of an iron will and obsessive personality that he channeled into the creation of a line of extremely clever yachts he described not merely as cruising boats, but as “integrated cruising systems.”

The Super Maramu, the culmination of a series of six different Amels produced in Henri Amel’s lifetime, was first introduced in 1989 and was discontinued in 2005, the year Amel passed away, after a production run of 497 hulls. It is very much a production boat in that most everything about it is set as firmly in stone as possible at the factory. New Amels are delivered, quite literally, ready to sail anywhere in the world with option lists that are very short. You either buy into the Amel system, or you don’t, and if you don’t you are well advised to buy another boat rather than try to make one of these into something it isn’t.

As on all Amels, the focus aboard the Super Maramu is very much on comfort and convenience. The boat, consequently, is very systems intensive. Standard equipment includes a generator, diswasher, washer-drier, a fridge and freezer, and a microwave oven, not to mention myriad lesser bits of kit, including a vacuum cleaner, hairdrier, and a specially designed shopping cart. Most Super Maramus were also delivered with optional watermakers and air-conditioners installed. 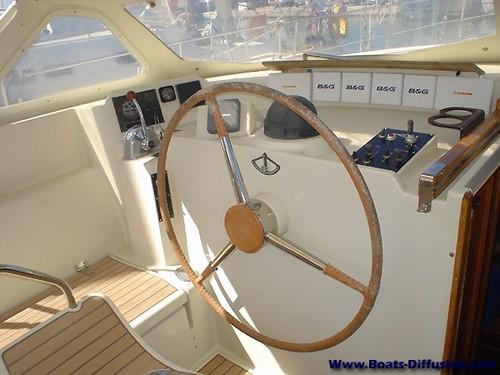 The same philosophy pertains on deck and the boat is designed to be operated from the confines of the well-protected center cockpit by a single individual capable of lifting no more than 50 pounds. Both the in-mast mainsail and headsail are controlled with push-button electric furlers; the smaller in-mast mizzen is controlled by a direct-drive furler turned with a winch handle. All sheet winches are electric. The power windlass, replete with chain counter, can also be operated from the cockpit, as can the integral anchor washdown system installed in the bow roller. There is also a retractable bow thruster to help out when docking, though it is necessary to step out on deck to handle dock lines.

Equipment lists like this often translate into lots of maintenance and repair headaches, but Amel obviates this as much as possible by making all original systems installations standard and identical. All gear on the Super Maramu was manufactured by Amel itself to its own standards, or was sourced from suppliers considered absolutely reliable. To insure systems are accessible and easy to work on, all machinery is installed under the cockpit in a large engine room with close to standing headroom. Even better, Amel provides superb technical support for all owners of its boats and has dedicated service centers in both Europe and the U.S. that are staffed by certified technicians.

Amel is also very focussed on safety, as is reflected in the Super Maramu’s overzealous construction. Hulls are solid handlaid laminate composed of biaxial cloth set in polyester resin. The cloth is a special flat woven type created especially for Amel that bonds well to itself with minimal voids without intervening layers of mat. Amel also applies a proprietary blister barrier coating directly underneath the gelcoat on all its boats, and this so far has reportedly prevented osmotic blisters from appearing on any Super Maramu hull. Balsa-cored decks on Amels are installed with the hull still in the mold, and the joint is laminated with six layers of cloth so hull and deck together ultimately form a monocoque structure. Inside the Super Maramu there are four full-height watertight bulkheads (two are fitted with watertight interior doors), that were also bonded in place with the hull still in its mold. The deck is solid laminate anywhere hardware in installed; all hardware is mounted with stainless-steel fasteners tapped into stainless-steel plates buried in the laminate. 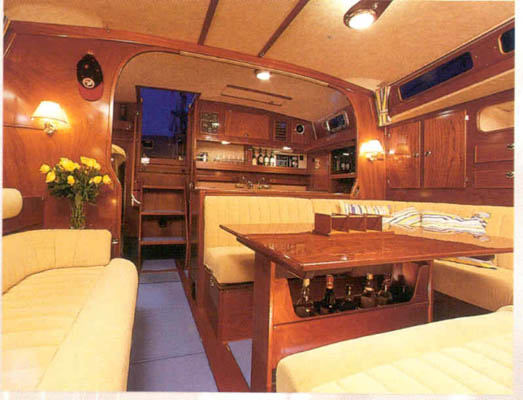 The boat’s interior is designed to keep water intrusion to an absolute minimum. There are no less than eight watertight compartments aboard with special valved limber pipes routing any stray moisture to a deep central sump. Originally the Super Maramu was built with just three raw-water intakes in the hull (two for the two toilets, plus one for all machinery) and later, in the so-called Millenium edition of the boat produced after 1998, this was reduced to just one intake with one master sea-chest. All outlets, meanwhile, are above the waterline.

The engine installation is also utterly unique and incorporates a proprietary U-drive, wherein the engine is mounted facing aft and its thrust is transmitted via two right-angle joints to a special integral drive leg mounted on the back of the keel. The propeller’s thrust is perfectly horizontal and is all carried by the keel, allowing the engine itself to be mounted on very soft mounts, thus keeping vibration to a minimum. Add on some top-notch sound insulation and what you get is a very quiet ride while motoring.

In terms of sailing performance the Super Maramu, though hardly a dog (particularly on a reach with a mizzen staysail set), is not super fast. The boat does have a modern underbody with a well-shaped fin keel and a separate rudder on a skeg, but its waterline is relatively short. Both the main and mizzen, meanwhile, are handicapped by the hollow leeches required for in-mast furling, and the shrouds are outboard so sheeting angles are commensurately wide. A spinnaker can be flown if desired, but the presumption, in keeping with the emphasis on ease of sailhandling, is that headsails will be poled out instead. To facilitate this there is a unique, easy-to-use twin-pole system for booming out sails from the shrouds. 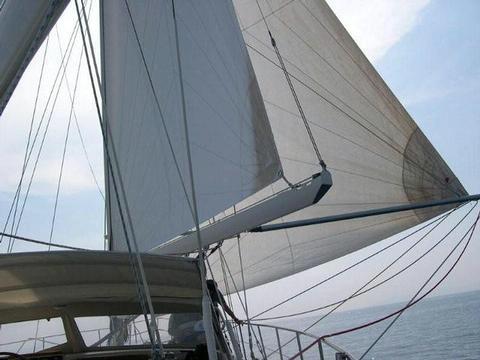 There are innumerable other idiosyncratic details on this boat that you will either love or hate, depending on your personal biases. Many, for example, are put off by the faux-teak decking, at least until they realize that it requires no maintenance. A lot of people, too, don’t think much of the blue fiberglass cabin sole that was introduced on the Millenium edition of the boat. Almost everyone, meanwhile, thinks the solid rail encircling the entire deck is a fabulous idea. The Super Maramu, like all Amels, is packed with clever ideas, both large and small, and really the only way to figure out if you appreciate them is get aboard a boat and examine it in detail. 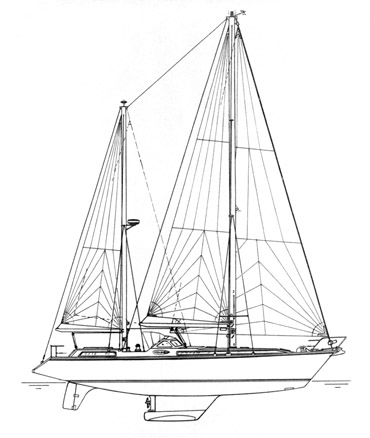