You may have noticed I haven’t been in a huge rush to blog about the offshore race in which Team SEMOSA competed the week before last. If you’re assuming this was because we did poorly, you wouldn’t be far wrong.

We ran the race on Phil Cavanaugh’s Baltic 35 Alida, which we have campaigned with some success in the Piscataqua Sailing Association‘s Tuesday night beer-can series over the past few years. Because the Downeast Challenge course runs from Marblehead, Mass., to Rockland, Maine, where I once sailed regularly, Phil anointed me navigator. I’d never been a racing navigator before. One perk, I discovered, is that the navigator can easily think of important reasons why he should be belowdeck when conditions on deck suck.

For example, at the end of this race, when we were trying to thread our way into Penobscot Bay through fog and pouring rain, I spent all my time sitting at the nice dry nav station watching for obstacles on the chartplotter and radar. Meanwhile, Phil and our newest SEMOSA member, David Hill (on the left above), got thoroughly soaked up in the cockpit.

The start off Marblehead, on Sat. July 24, was very light and drifty, as you can see here: 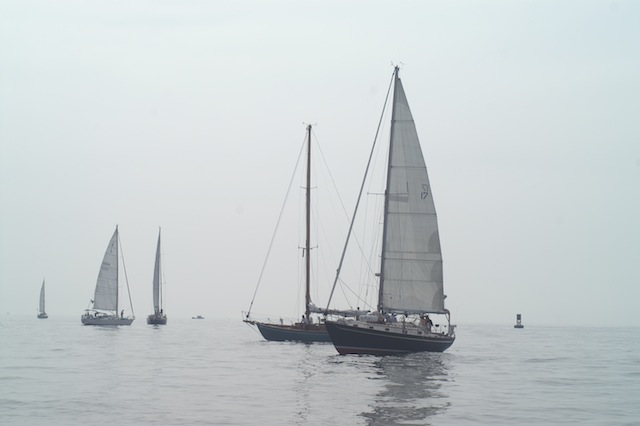 We totally nailed it, though. Which is in keeping with the Team SEMOSA MO when it comes to race starts: we’re either first across or we really screw it up. In this instance, soon after we crossed the line the wind started filling in nicely from the east. A few of the faster boats passed us outright before we made it to Cape Ann; we also lost ground to some comparable and/or slower boats when the navigator (damn him!) led us a little too far inshore on one tack.

Once around Cape Ann we were on a moderate close reach for the rest of the day and most of the night. The boats closest to us were Mermaid, a flawlessly maintained vintage 44-foot S&S wooden ketch built by Paul Luke, and Walkabout, a Tartan 10 sailed solo by Doug Pope (of Pope Sails), who once made a great suit of sails for my Golden Hind 31 Sophie back in the day. Doug has owned Walkabout for a while now and has made several cool modifications, including adding a rather high-aspect doghouse over the companionway, which you can see here in this photo from before the start: 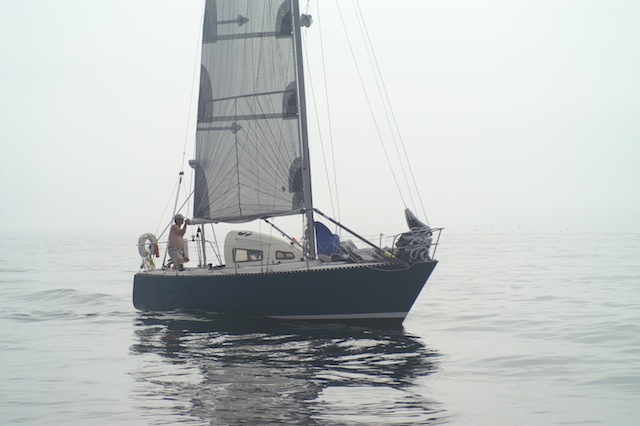 We were sort of holding our own, barely clinging to the skirts of Mermaid and Walkabout (both of which we owed a little time to), when the wind shifted slightly more on the beam right before sunset. Aha! we thought. Here’s our chance! And we hoisted our A-sail. (Rather smartly, I might add.) But as soon as the sun was down and the light faded, Phil, who was on the helm, suddenly seemed to lose his mind. In an apparent bid to change his official SEMOSA nickname from “Snake Wake” to “Wrong Way,” he began steering the boat in all sorts of wild directions, including straight back south toward Cape Ann.

After a big kerfuffle on the foredeck, where I succeeded in getting the chute down after it was backwinded into the rig, I made it aft to the cockpit and discovered what the problem was. The weird backlighting on the B&G instrument display had rendered it totally illegible, and the compass light was far too dim for any middle-aged helmsperson to read the card beneath it.

By the time we got everything sorted, Mermaid and Walkabout were long gone and two other boats that had previously been way way behind us were breathing down our neck. Fortunately, we succeeded in getting away from them again and kept sailing at a good rate until the very early morning.

Soon after sunrise on Sunday, as mentioned, the wind went light and shifty in the foggy rock-strewn approaches to Penobscot Bay and it started pissing down rain. After the rain stopped, our ringer, Chas. “May I Cast Off Now?” Lassen was persuaded to come on deck and steer for a bit.

Fortunately, the tide was inbound, our navigator had some sense of where the current was fastest, and Mr. Lassen’s helming was steady and true. When the fog finally lifted, we were very gratified to see both Mermaid and Walkabout not too far in front of us. We did manage to catch up to Mermaid, right off Owl’s Head, a few hundred yards from the finish, but their young, eager crew launched a chute as soon as we brought the wind to them. We were not willing to follow their example, and they finished about four minutes in front of us.

In the end, we finished third in Class B out of four boats both on both elapsed and corrected time. Overall we were fifth out of 12 boats on corrected time, but only ninth on elapsed time.

In studying the results, the boat we were most impressed with was Mainstay 5, a Jeanneau One Design 35 (or JOD 35), owned by James Coughlin of Northport, Maine. I had never heard of these before and was struck by the boat’s attractive lines before we started the race. Mainstay took line honors overall and was first in Class A (out of four boats) on elapsed and corrected time, though she had the highest PHRF rating (84) in her group. She finished all of seven minutes ahead of the lowest rated boat in her class, a very racy Akilaria Class 40 (PHRF -9!) named Toothsome.

Mainstay is currently for sale for what seems a very reasonable asking price of $49K. Doug Pope claims she is the only one of her type in the United States.

The JOD 35 is much better known in Europe, where they were built by Jeanneau from 1991 to ’95. Designed by Daniel Andrieu as an affordable one-design inshore boat for a full crew, the JOD 35 has since become popular with singlehanded offshore racers sailing on a budget. Evidently, there’s still at least one active one-design fleet in Portugal. I hear also that several of the singlehanded boats have had water ballast tanks added, as they do need weight on the rail to sail well. 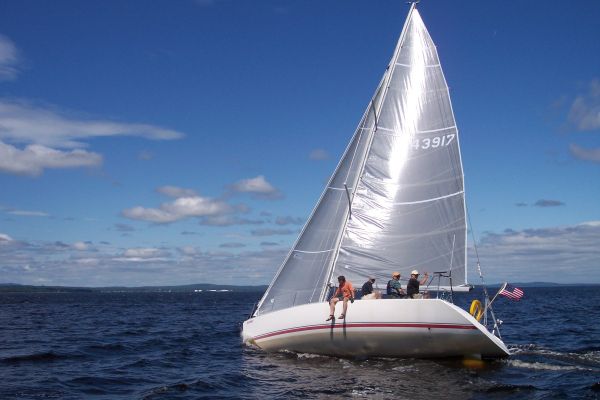 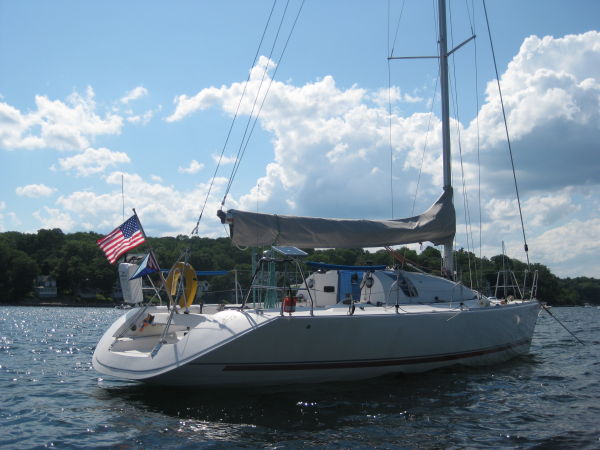 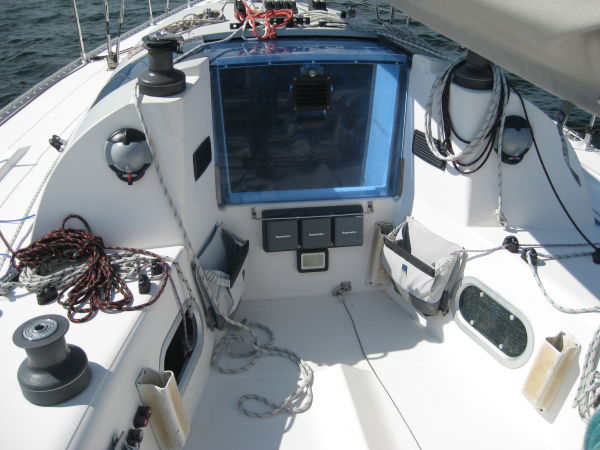 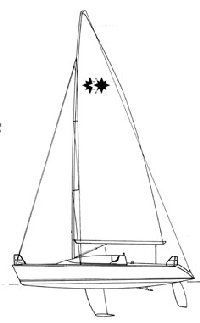 PS: Many thanks to the Marblehead Yacht Club and the Rockland Yacht Club for hosting the Downeast Challenge!