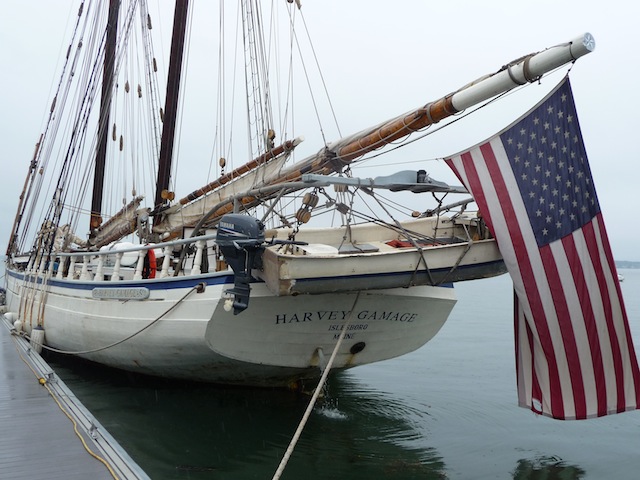 This could be one of those Twilight Zone triple-coincidence stories that once upon a time kept me up to my armpits in pulpy comic books. Cue orchestra; dial up the basso profundo Rod Serling voice-over: “And there’s the signpost, straight up ahead…”

Coincidence #1: While bringing Lunacy back from Bermuda, you may recall, I had one Jeff Bolster aboard as crew. A fellow SEMOSA member from here in the hood in Portsmouth, he is, among other things, a very experienced ex-schooner skipper. The schooner he spent the most time commanding, back in the day, was the vaunted Harvey Gamage.

Coincidence #2: While en route from Bermuda to Portsmouth Jeff and I spied a large spread of sail on the horizon. On hailing the vessel via VHF, we learned it was none other than the Harvey Gamage.

Coincidence #3: Just this past Monday, just a few days after I at last got Lunacy settled down on her summer mooring at Portland Yacht Services, the schooner Harvey Gamage came browsing through the PYS mooring field, hoping to land on one of the PYS docks. In doing so, she gave poor Lunacy a very hard rap on her nose. 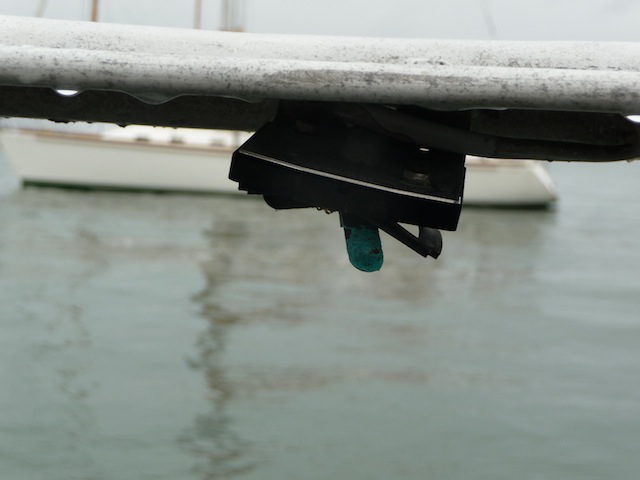 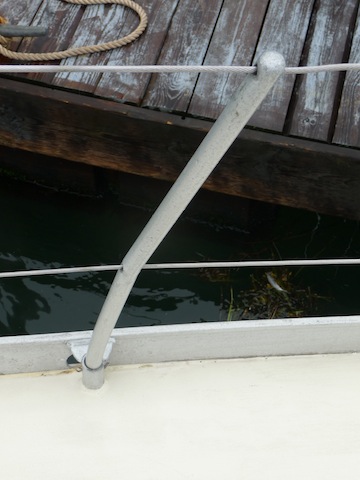 Which isn’t too bad, really. A fiberglass boat, I wager, would have fared much worse. One of the great advantages of sailing an aluminum boat, I’ve learned, is that you can bounce off hard objects without suffering grievous damage.

I stopped by to inspect the carnage yesterday morning and had a short conversation with the Gamage‘s current skipper. The complicating factor in replacing any stanchion post on Lunacy, I noticed, is that you must also replace both lifelines running through it. These have heavy swage fittings on either end that will not fit through the narrow holes piercing the solid aluminum posts. So in the end I decided it would be best to file an insurance claim. So far the Gamage‘s insurer has been very cooperative, particularly as they reckon my claim won’t exceed the policy’s deductible and they won’t have to pay me a dime.

I also tried to get Jeff stirred up, hoping he’d make provocative and incendiary comments about the competence of those currently running his old boat that I could share with you here. Jeff didn’t rise to the bait, but he did note that he never hit any boats back when he was driving big schooners. He did have a lot people fall overboard, but that’s another story.