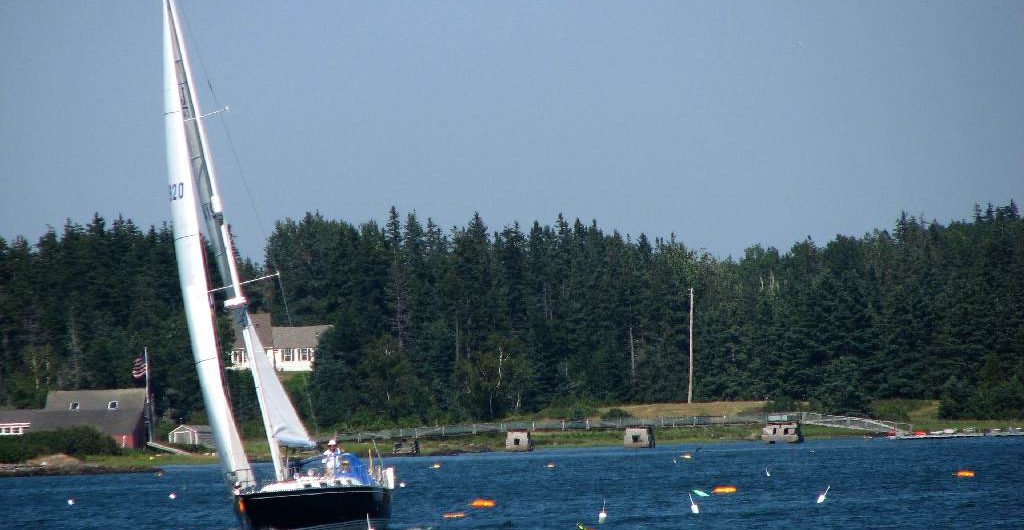 Having spent a full day of my July 4 weekend moving Lunacy north from Portsmouth, NH, to her summer quarters in Portland, ME, I was reminded for the umpteenth time of several things I love about sailing in this part of the world. I was reminded, too, of a few things I don’t love so much. Number one on the latter list: lobster pots!

Having learned boats as a child in these parts, I am very familiar with these. I have always appreciated the convenient omnipresent current reference they provide and was taught from an early age to always respect the fact that they represent someone else’s livelihood. But starting about 15 years ago, when I returned to Maine after a few years absence cruising the North Atlantic on Crazy Horse, my attitude toward them changed markedly.

Never before had I seen so many pots in the water. It seemed as though during my absence some mighty pill-popping deity had spilled an enormous stash of brightly colored fun-filled capsules all up and down the coast. Anchorages I’d visited in the past and remembered as being open and empty were now so clogged with pot buoys it was hard to lay a hook anywhere without fouling them.

I definitely experienced a catharsis that summer. This began in a small cove off an island at the mouth of Muscongus Bay. Anchoring there one afternoon I went to great trouble to stay clear of all fishing gear when planting my hook and thought I had succeeded in finding a nice open pocket of water to lie in. Next morning, however, though the wind had not shifted, I found my anchor rode had tied itself in a fearsome knot round some pot warp leading to a bright blue-and-white buoy.

I spent an hour trying to untangle the mess from on deck, then reluctantly stripped down, jumped in the water, and spent another 20 minutes unknitting things before finally freeing my rode. I was positively hypothermic when I came back aboard.

I reanchored the boat in what I thought was another open spot and had no problems with pots for the rest of that day. Next morning, however, I woke early to the distinctive air-jacketed rumble of a lobster boat’s exhaust and was surprised at how close it sounded. Peering out a porthole I saw the boat was in fact right off my bow. I was both shocked and dismayed when I saw the lobsterman aboard drop a trap tied to a blue-and-white buoy right on top of where my anchor had to be.

Prior to that moment I had believed it was a sin to cut a pot warp. But this changed everything. I went back to sleep, calmly made breakfast when I reawoke, and when it was time to hoist anchor I went forward with a knife, cut free my rode, and went on my way. Even as the anchor came aboard that morning, I realized my world view had been permanently altered; I realized, too, that a wetsuit was now pretty much mandatory equipment when cruising the Maine coast.

I duly purchased a wetsuit, stored it in a hanging locker, and have always carried one since. I wish I could report I’ve never had to use it. On many occasions while sailing in Maine I’ve caught traps on my keel or propeller and have had to don the suit and go swimming to get them off. This is never a sublime experience. One time–in a narrow rock-strewn channel with a 25-knot breeze blowing–it in fact seemed positively life-threatening.

I’ve also done battle with bug hunters in mooring fields. Ask any New England harbormaster if he or she believes that buoyed harbor channels and clearly defined mooring fields should be off limits to lobster pots, and they will heartily agree with you. Ask them to actually enforce such a rule and they will quickly change the subject.

I remember in one harbor where I once moored a boat there was a lobsterman hell-bent on stationing a pot right off my mooring ball. Every time a cold front passed through and the wind shifted northwest, the pot inevitably fouled my propeller. So we fell into a little game. Every time I left my mooring, I picked up the pot buoy, tied off the warp to a bow cleat, and dragged the whole rig 100 yards down harbor clear of the mooring field. Every time I returned to my mooring, I found the buoy floating next to my mooring ball again. I finally called it quits when I went out to the boat one day and found my deck covered with rotting lobster bait.

The lobster fishery is unique in many respects and, at least in Maine, is well regulated. Much as I have prayed for the lobsters to run out, there is in fact little chance this will ever happen. After a huge unprecedented boom in the late ‘90s, the population did finally shrink a bit after 2001 and the number of buoys in the water significantly declined. In recent years, however, the pots have slowly been getting thicker again.

There is, I have found, a distinct threshold when it comes to pot density. If you can sail a course pretty much as you like and need only occasionally dodge a pot to maintain it, the density is comfortably low. Past a certain tipping point, however, it is no longer possible to maintain a course. Steering your boat you are instead forced to move like an NFL running back, constantly dodging and weaving, always on the look-out for an open lane to move forward in. Even worse, the pots will dictate where and when you can tack, gybe, hoist sails, leave the helm to relieve yourself, and so on.

There are tools we can use to ameliorate these problems. It is, for example, foolish these days to transit the Gulf of Maine under power at night without a sharp line-cutter on your prop shaft. I’ve also seen advertised some nifty-looking razor-edged halberds that make it possible to slash away lines under a boat from on deck. Such a weapon might also come in handy when racing and could be used to cut up an opponent’s rig during tight mark roundings.

Mention devices like this to a lobsterman, and you can be sure you’ll get a long lecture on the price of traps and line and the economics of fishing. All I can say to that is: my friends, you reap what you sow, in more ways than one. Besides, I’m very sure the fellow who dropped his gear on top of my anchor that morning all those years ago wasn’t thinking about what the gear cost him. I’m sure he was concentrating much harder instead on just ignoring my existence.