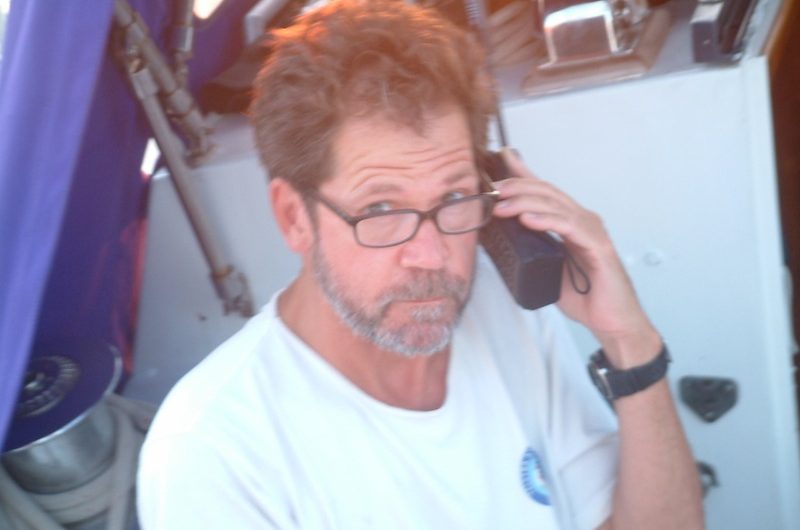 You’ll recall we left the good ship Lunacy pining on a mooring in Bermuda (with a perfectly good starter), waiting for me to welcome home Reid Stowe AND preside over my mother’s memorial service, so I could AT LAST return to the Onion Patch and sail her home. Stalwart crew member Jeff Bolster and I flew in Tuesday, June 22; we sailed out early the following morning. Not long after raising sail, even as we watched incoming Bermuda Race boats reaching for the finish line off St. David’s, I got to enjoy my proverbial 15 minutes of fame and checked in via sat phone to participate in a National Public Radio call-in show (WBUR’s On Point with Tom Ashbrook) about Reid’s amazing voyage. These are my just desserts, I suppose, for being the only sailing journalist on Earth who has been truly interested in Reid and his odyssey. Said desserts also include getting savaged by the peanut gallery over at Sailing Anarchy.

But this post is about the passage. It was filled with those minor, but meaningful events that make ocean sailing a very special sport. Cetaceans were a major feature. On the second day, while I was on watch, a series of minor squalls passed through. Just as the last of these was dying away, I heard the distinctive PUFF of a mammal exhaling, hard on the starboard quarter. I saw the spout, then came a very large, very tall, very black dorsal fin. It passed astern, close by, then was gone.

A killer whale, perhaps? It was the only thing I could think of. I’ve spent some time studying wildlife texts since getting home and have yet to come up with any alternative conclusions.

Soon afterwards a huge pod of dolphins appeared. As I crept forward to the bow to enjoy their company, a large flying fish suddenly flopped on deck right in front of me. I at once scooped it back overboard and prayed it would not immediately be eaten by the dolphins. Later, when I told Jeff about all this, he at once mourned the loss of the fish. He assured me they make fine eating and later, after another errant flying ace crash landed on deck, he demonstrated how they can be consumed sashimi style. 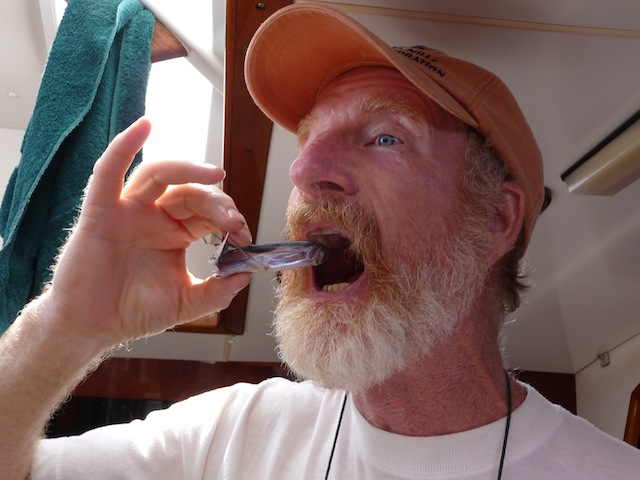 We also enjoyed lots of positive current. We caught the northbound side of a cold eddy south of the Gulf Stream, then caught a big northbound meander in the Stream itself. Later, coming through Great South Channel, we also enjoyed mostly positive tidal current. And finally, the tide just happened to be coming in when we entered the Piscataqua River here in Portsmouth in the early afternoon yesterday. A trifecta plus one, if you will.

The Gulf Stream, we found, was full of very warm water. Readings via the depthsounder peaked at 88 degrees Fahrenheit, which is the warmest ambient ocean water I’ve ever seen anywhere. We had a cold front pass over us while in the Stream, which led to what the Weather Guy, Rick Shema, predicted would be “Enhanced Inclement Weather.” Fortunately, it wasn’t too enhanced. The wind was very fluky, but there was only one gust as high as 30 knots. We had to do lots of trimming and reefing and unreefing, but only for an hour or so. 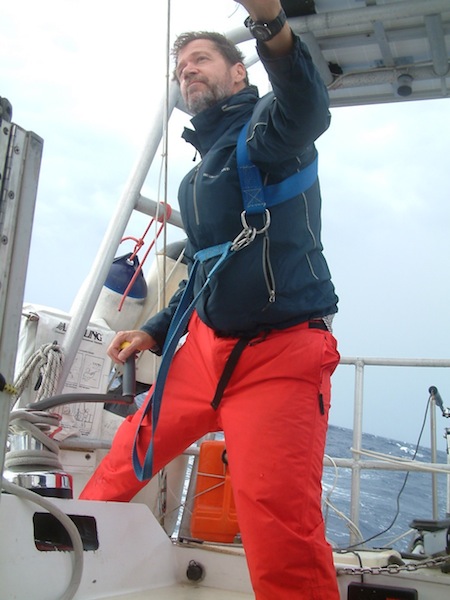 During the worst of it we had lightning all around. As is my habit, I took the back-up handheld GPS receiver, stuck it in a plastic Tupperware container, then put that inside the oven. The theory being the GPS, thus isolated, just might survive a lightning strike.

Can anyone tell me whether this makes any sense at all???

The best part was getting to fly the spinnaker a lot. All told we had it up nearly 18 hours. This included the entirety of a day east of Cape Cod, after we cleared the Great South Channel, when it was foggy as hell. Call me crazy, but flying a spinnaker in the fog is about as sublime as sailing can be. 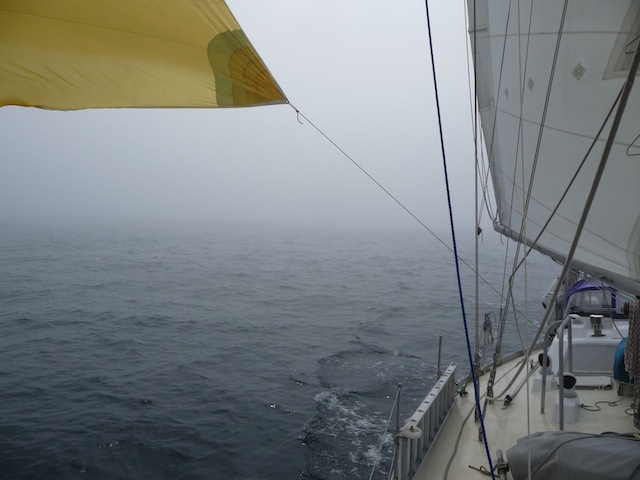 An act of joy. Or faith, at least.

The worst part was having problems with the engine (again!). Imagine my horror on discovering that the top of my brand new engine (we motored, in all, about 40 hours through some lulls in the mostly southwest wind) was caked in dried salt. This was due to a small leak in the forward galley sink drain, directly over the engine. This sink receives a small, steady flow of engine raw water through the top of the siphon break on the raw-water side of the cooling circuit. Effectively the engine was pissing on its own head, via the sink, and the piss was evaporating, due to the engine heat, leaving behind an ugly salt pan. 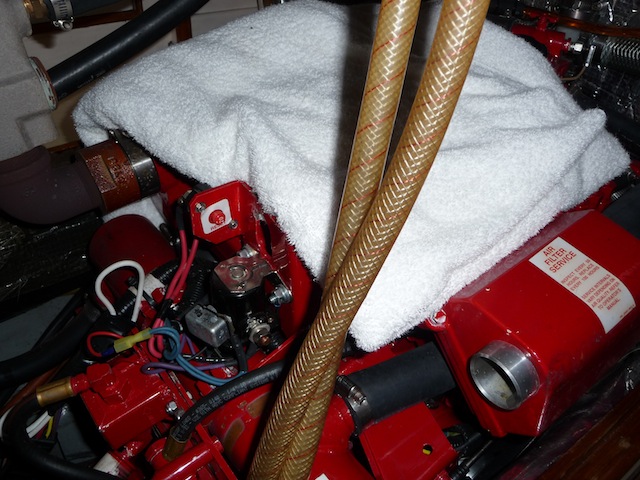 I cleaned this up as best I could, then put a towel over the engine to keep it from happening again.