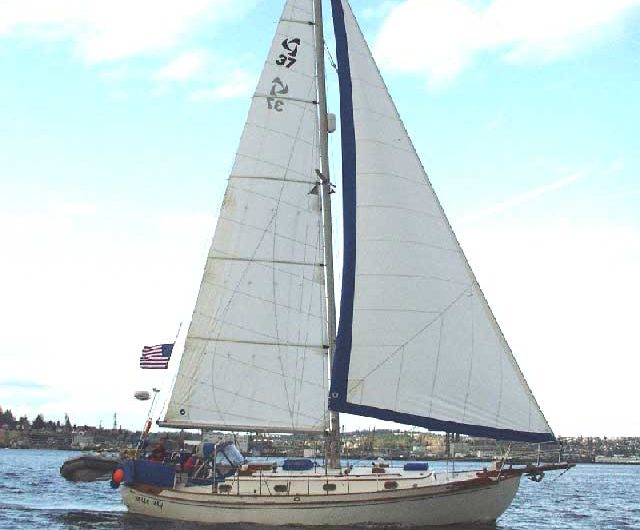 The Tayana 37 is the most successful of the many Taiwan-built double-ended full-keel cruisers that were conceived in the mid-1970s in the wake of the great success of the Westsail 32. Designed by Bob Perry and originally marketed as the CT 37 when first introduced in 1976, over 600 Tayana 37s have since been built. Technically it is not still in production, but Tayana, a.k.a. the Ta Yang Yacht Building Co., has all relevant molds and tooling and still fills orders for new boats on a spot basis.

This boat is quite heavy by today’s standards, but it sails remarkably well and can serve effectively as both a coastal and bluewater cruiser. It has a particularly strong reputation as an offshore boat and is certainly one of the more popular bluewater cruisers ever built. Reportedly at any given time there are more Tayana 37s out there wandering the globe than any other single type of sailboat.

In designing the Tayana 37 Perry sought to retain the color and character of strictly traditional full-keel double-enders like the Westsail while injecting as much performance into the formula as possible. The forefoot of the full keel is cut away, the rudder has a more modern, efficient profile, and the hull’s cross-section is not a classic wineglass shape in which hull and keel are a unitary form. Instead the hull is very round and the keel presents as a distinct and separate foil-like appendage.

The rig, meanwhile, is large and quite tall for a boat of this type. The original sail plan called for a cutter rig with a very raked mast, but in practice this resulted in a heavy helm. Perry therefore preferred the optional ketch rig, which is much more balanced, but overall this rig is smaller and few in fact were ever built. As it turned out, the cutter rig balances just fine if the mast rake is eliminated, and cutter-rigged Tayana 37s have proven to be both relatively fast and weatherly. One good friend of mine who made both single- and doublehanded transatlantic passages in his cutter-rigged Tayana 37 during the 1990s claims to have sailed as many as 186 miles in a day. Though the boat carries its fair share of ballast, it is a bit tender intially, thanks both to its tall rig and heavy teak-laden topsides and deck. Its motion, however, is very smooth and comfortable in a seaway.

Ta Yang is one of the better Taiwanese builders and the Tayana 37’s construction quality on the whole is quite good. It is true, however, that Ta Yang had a bit to learn as it went along and that later boats are better built than earlier ones. The hull is solid hand-laid glass stiffened with strong bulkheads and stout floors, the deck is balsa-cored, and the iron ballast, glassed into the hollow keel section, is wholly internal. All deck hardware is through-bolted and supported by robust stainless-steel backing plates.

Flaws on earlier boats built prior to 1981 include inferior electrical wiring and the use of inferior-grade stainless-steel alloys in some hardware and fittings. Also, deck joints on early boats are prone to leaking, as the joint forms a hollow raised bulwark that is pierced by several hawsepipes and scuppers that may or may not be well bedded in sealant. On later boats the bulwark’s interior cavity is glassed over from the inside, hence is more watertight. Some early boats may also have wooden spruce spars, which are overly heavy and prone to rot over time, and sloppy worm-gear steering systems that were later replaced with more sensitive pedestal/cable systems.

Almost all Tayana 37s were built with teak decks. These look very nice, but are fastened in place with screws and are therefore a likely source of leaks later in a boat’s life. Another common problem is the rudder heel, which is bronze fastened to the hull with stainless-steel bolts and is thus prone to galvanic corrosion. Prospective buyers should also be a bit wary of the laminated wood bowsprit, which tends to rot underneath over the years if not scrupulously maintained. Look for varnished sprits with no signs of moisture damage; a painted sprit is often a sign of trouble.

For a production builder Ta Yang has always offered a suprising number of options. Besides being sold as a cutter or ketch, with either wood or aluminum spars, the masts on Tayana 37s may also be either keel- or deck-stepped. The boat is also available in a pilothouse version. Tank locations are likewise somewhat variable. The original design called for fuel tanks under the settees in the main saloon, but Ta Yang instead installed one large tank under the V-berth up in the forward stateroom so as to create more storage space in the saloon, and this only hobbled the boat’s performance. Later a midships keel tank was offered as an option, and this proved far superior. In most cases fuel tanks were built of black iron, hence will eventually corrode, but the tanks in fact are relatively easy to access (this includes the midships keel tank) so this is not nearly as troublesome as it might be.

One of the most variable aspects of the Tayana 37 is its accomodation plan. Ta Yang effectively customizes interiors at no extra charge and owners ordering new boats have always taken full advantage of this. The standard lay-out is fairly straightforward, with a large V-berth forward, a simple open quarterberth aft, and a conventional saloon betwixt the two. The earliest standard lay-out featured a pilotberth in the saloon. In reality many boats have offset Pullman doubles forward, a few have separate aft-quarter staterooms, and custom-built storage/seating arrangements are very common. Most boats have separate shower stalls alongside the head, which is a grand luxury in any yacht this size. The interior is finished in solid teak, and the quality of the joinery work is superb, just as good as on any high-end European boat.

One of the best things about the Tayana 37 is that it is exceedingly affordable. Older boats in need of work can be had for under $50,000, while younger boats in very good condition that are crammed to the gills with all kinds of offshore equipment and systems upgrades can often be had for less than $100,000. Usually there are many boats on the brokerage market at any given time, which makes it easy for buyers to press for bargains and hard for sellers to recover money spent on extra gear and upgrades.