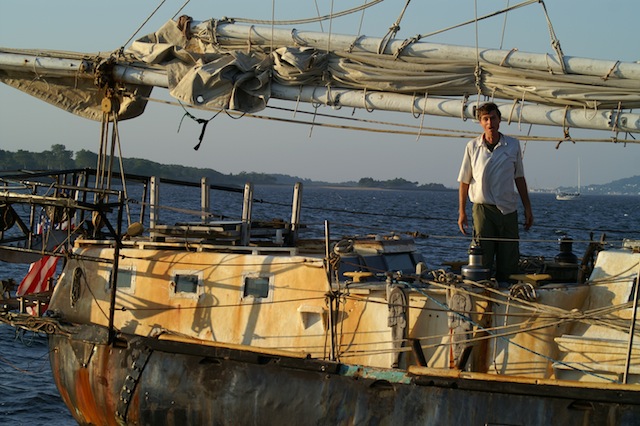 Twas about 6 a.m. yesterday when we aboard the good ship Avocation arrived at Sandy Hook and found Reid Stowe aboard the schooner Anne getting ready to hoist anchor and head up the bay to Manhattan for his big homecoming. The wind had been southerly when Reid first anchored two days earlier, but now it was westerly, blowing about 15 knots and building. It looked like he might have a hard time hoisting anchor and getting under sail without getting blown down on to the Coast Guard station a few hundred yards behind him.

“You need some help?” I shouted.

Reid glanced around at the 70-foot, 60-ton gaff-rigged vessel he’d been singlehanding out on the open ocean for the past two years. Then he looked to windward.

Hank Schmitt, master of Avocation, and a master of close-quarters maneuvering, had no trouble getting me close enough to hop on to Anne‘s transom. Tania Aebi was thoughtful enough to take command of the camera I left behind and snapped these pix as we hoisted anchor and raised sail: 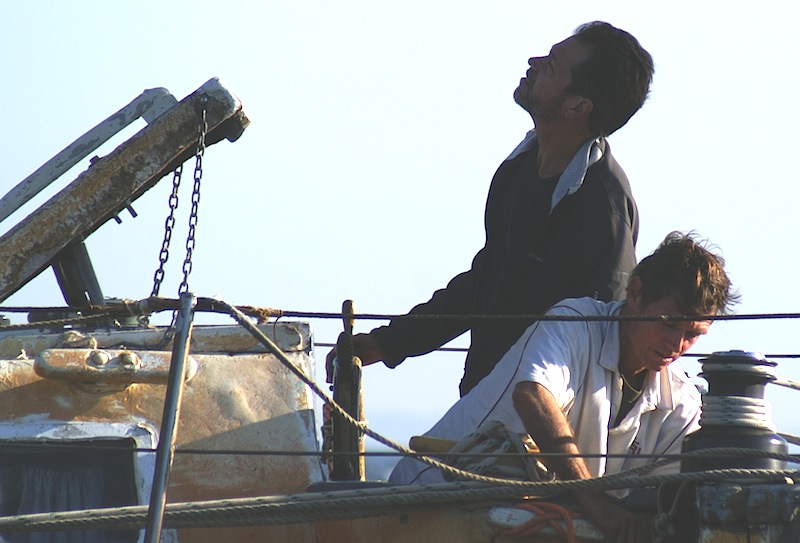 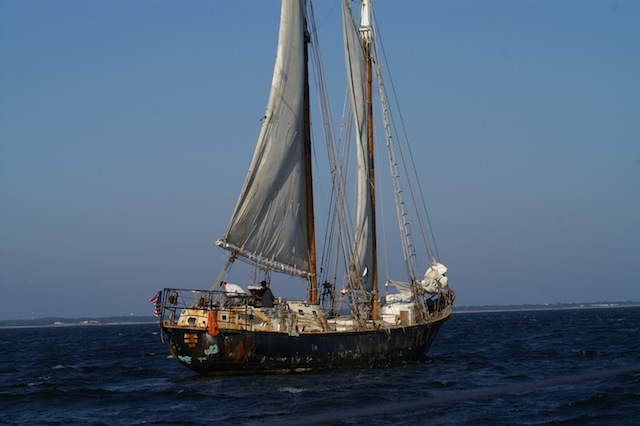 That’s full sail, mind you. By the time we got everything up (Reid did all the work; I just managed the helm and engine and kept Anne‘s nose to the wind), the wind had piped up to 20 knots, and I was beginning to wonder if we should take something down again. But Reid was determined to fly as much canvas as possible.

We enjoyed a glorious power reach most of the way to the Verrazano Narrows. With the sails properly trimmed we were making better than 7 knots, but the helm was heavy as hell, thanks to Anne‘s missing bowsprit (from the freighter collision, see Day 15 of Reid’s record-breaking 1,152-day voyage). So most of the time we kept the main trimmed loose and easy. Still, even when we were scrubbing speed, the helm needed a firm hand and the jury-rigged wheel did not exactly inspire confidence. 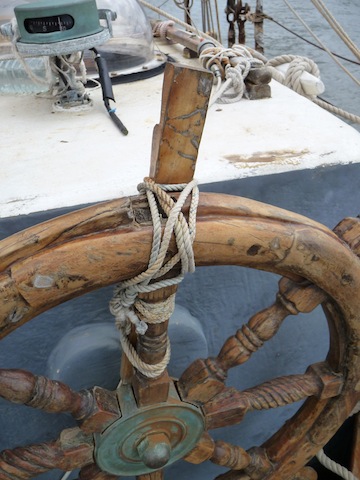 The wind went northerly as we approached the big bridge and kept right on building. We abandoned plans to put me back aboard Avocation, and proceeded to short tack our way under the bridge and into New York Harbor proper, which was alive with commercial traffic and gathering well-wishers. You can check out the whole scene in this video here.

What a blast! The most amazing part was when we took one super-short tack over to the Brooklyn side (to avoid a big tug and barge that were charging into the harbor at 11 knots) and found a car full of Reid’s family on shore. They somehow managed to get down the Belt Parkway and had pulled over to give us a big wave at the exact spot where we needed to tack away again.

By the time we beat up to the Statue of Liberty, the wind was gusting to well over 25. We hove to to wait for the press boat, and soon, fortunately, it died down again to below 20. For the last legs, a reach over to the Battery and a close-hauled board up the Hudson to Pier 81 at 42nd Street, I stayed below and let Reid bask alone in the glare of the publicity he had attracted.

(Before all you grumpy anonymous-forum types start muttering about Reid’s ego here, I should also point out that Reid gave me full credit for helping him sail up the harbor after we got ashore.)

The scene on the pier was intense. Reid couldn’t stop crying and had altogether too much to say about how much he loves everyone and everything. The best bits were when he was reunited with Soanya (whom he does refer to as his wife in private conversation) and met his two-year-old son Darshen for the first time… 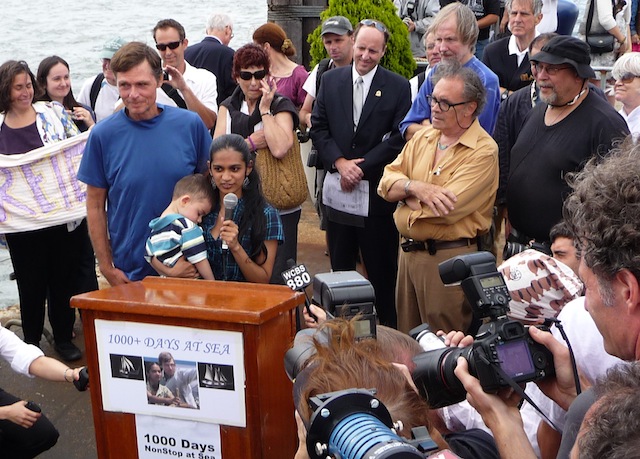 …and when he was reunited with his daughter Viva and met his three-year-old granddaughter Lucy for the first time. 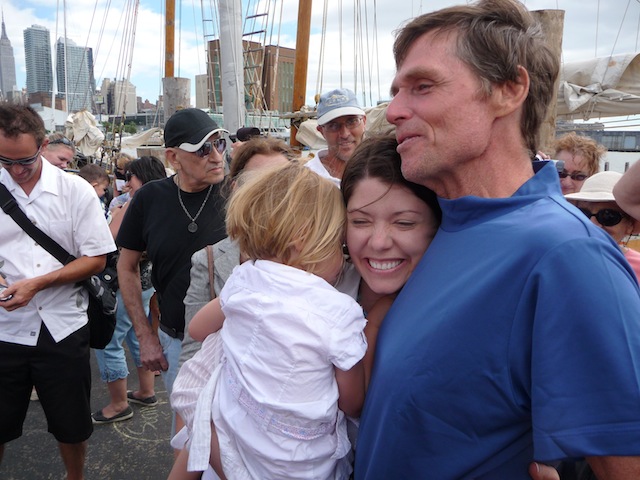 Reid and I obviously had lots to talk about during our sail together. His immediate plan is to live with Soanya and Darshen on the same pier in Hoboken from which he and Soanya set out way back in April 2007. He hopes to somehow capitalize on his voyage, but in fact has no clear notion of how to do that. In discussing his options, I was surprised at how prosaic he’s become on the subject. Previously my impression had been that Reid was upset by the fact that he’s never garnered as much public attention as he would like. Now he seems to accept that most of the world may never understand or appreciate him.

His biggest priority is organizing a refit for Anne. She is in surprisingly good shape for a vessel that’s spent three years at sea, but obviously there are many, many things that need work. First thing Monday, Reid told me, he plans to take everything off the boat and pressure-wash the interior. Then he’s getting right to work checking items off his to-do list.