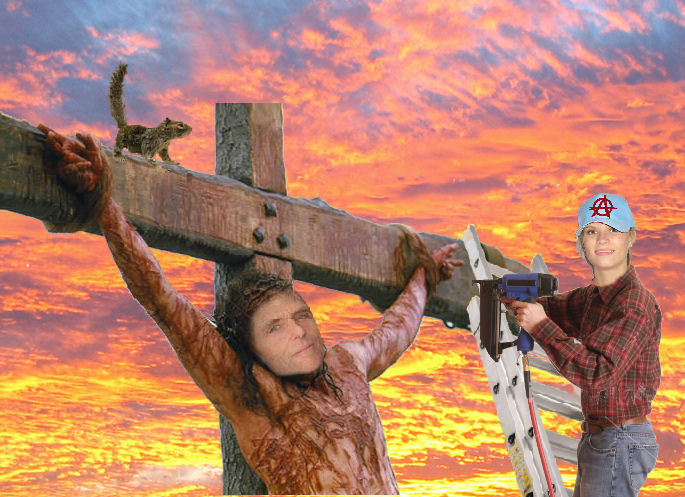 For marathon sailor Reid Stowe, as for many of us, the Internet is very much a two-edged sword. In Reid’s case, it has on the one hand allowed him to document and verify his record-breaking 1,000-day voyage to the world as it has unfolded. Through his 1,000 Days website he has been able to connect with and solicit support from an audience who might otherwise have been oblivious to his efforts. On the other hand, the Internet has enabled and served as a venue for a small band of anonymous critics who have sought tirelessly to mock and humiliate both Reid and Soanya Ahmad (his former crew member and the mother of his young son) through out all the three years he has been at sea. I can think of no other long-distance ocean sailor who has ever endured such relentless and venomous public abuse while actively engaged in a voyage.

The locus of anti-Reid criticism has been a forum thread at the Sailing Anarchy website, Couple Cruise for 1,000 Days, that may itself have set some kind of record for marathon web commentary. The thread, as I write, is 1,149 pages long, contains 28,711 posts, and has registered over 930,000 hits. Some of those participating have also created two anti-Reid blogs (1000 Days at Sea Reality Check and 1000 Days of Hell), have repeatedly inserted negative material into Reid’s Wikipedia entry, and have often commented negatively on news articles and blogs about Reid that have been posted online.

The general tone of the SA forum thread (and the two anti-Reid blogs) is absolutely consistent with that of the Sailing Anarchy website as a whole. Pitched primarily at competitive racing sailors, SA prides itself on telling it like it is and has in fact (to its credit) covered several important stories that other sailing publications and websites have shamelessly shied away from for fear of offending advertisers. The site also affects a snarky, irreverent, in-your-face attitude and panders to its mostly male competitive sailing audience by often publishing provocative pix of female sailors (the Sailing Chick of the Week, or SCOTW, for example, is a popular feature) with a special emphasis (as Frank Zappa once put it) on mammalian protuberances.

But even by SA standards, the anti-Reid thread has been a bit over the top. Participants have, for example, posted at least one blatantly misogynistic Photoshopped image of Soanya nude and in chains and have also implicitly threatened violence against Reid. (Both the image up top, and the one below, are copied from the 1000 Days of Hell blog site.) More recently they’ve posted Photoshopped images mocking Soanya and Reid’s son Darshen. Scroll through the SA forum thread and you’ll see that many of the attached images are now deleted (note: you need to register with SA to view images in the forums), but you’ll also see that the verbiage is overwhelmingly hostile and antagonistic. 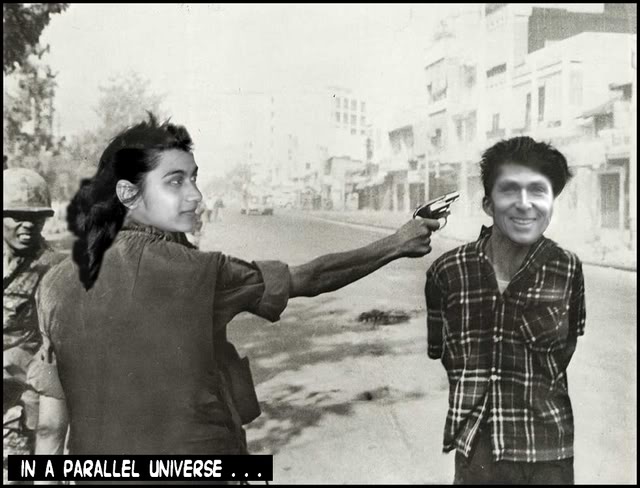 I would characterize the substantive complaints made by Reid’s critics as follows:

1. Reid is egotistical and sometimes exaggerates and stretches the truth when promoting himself. (This is true. But I would say these tendencies are very consistent with those exhibited by some famous sailors and many other creative artists I have known who seek to create and maintain large public personas.)

2. Reid has not accomplished some of the things he set out to do. (True. See my Various Purposes post for a more detailed discussion.)

3. Reid was once busted for smuggling pot and was once delinquent making child support payments. (True. Reid served nine months in federal prison on a pot charge and was once about $11,000 in arrears on support payments pertaining to his daughter Viva, who is now an adult attorney. Contrary to what many of Reid’s detractors have asserted, Reid was not caught smuggling pot on his own boat. He was hired as a laborer to help transfer a load between other boats.)

4. Reid did not use a holding tank while docked in New York. (True. Like many other sailors I know, Reid has ignored the irrational federal marine toilet laws.)

5. Soanya had no sailing experience prior to setting out with Reid, is much younger than Reid, and was impregnated by him. (All true. But Soanya is, after all, an adult.)

6. Reid is an incompetent sailor and his boat was poorly prepared. (Not true. Having followed Reid’s preparations closely, I would say he did an excellent job given his budget constraints. His one big mistake, IMHO, was not bringing a sewing machine. He is also a very experienced, highly competent ocean sailor.)

I leave it to you to decide for yourselves whether the heinous crimes outlined in points 1 thru 5 really merit the three years of vituperative commentary Reid has provoked at Sailing Anarchy. As to the last point, I would say a part of what we are seeing here is a clash between two very different aspects of sailing culture. The macho competitive racing guys, who look up to sailors like Peter Blake and Torben Grael, versus certain crunchy granola cruising types, who look up to sailors like Bernard Moitessier and Jim Wharram. Some of the former, who are used to sailing over-powered lightweight modern boats with fine foils and laminated sails, apparently have little appreciation for the skills needed to manage a heavy under-powered gaff-rigged traditional vessel. Based on what I’ve read on SA’s anti-Reid thread, I would say too they have no appreciation of sailing as a spiritual pursuit.

To get a better sense of what motivates these people I discussed Reid via e-mail with one of the most active SA posters, who goes by the handle Regatta Dog. I wasn’t surprised to learn that “RD” is a very active racing sailor who has little offshore experience and sails mostly on Long Island Sound and Chesapeake Bay. He insists he does not hate Reid, but that he is passionate about the sport of sailing and feels strongly that Reid should not be held up as one of its paragons. He also, however, asked that I maintain his anonymity. He said does not want people he races with to know about his “1,000 Days hobby,” as he is afraid he would lose his spot crewing on a Melges 32 if they did.

What RD calls a hobby, others might call an obsession. He has, in fact, been involved in something like a cyber war with members of Reid’s shore team. He claims he has never “researched” Reid. But he has accessed the 1,000 Days shore team’s internal e-mail, has made FOIA requests pertaining to Reid, has visited public archives seeking documents, has solicited information via phone and e-mail, and has met with a disgruntled ex-girlfriend of Reid’s. He also attempted to meet Soanya’s plane at JFK airport when she returned from being evacuated from the boat in Australia and succeeded in attending her welcome-home party.

Reid’s shore team, for its part, after RD appeared at Soanya’s party, succeeded in discovering his identity and that of his ex-wife and children (evidently with Reid’s knowledge). They published some of what they learned on the 1,000 Days thread at SA, an act which RD says he felt was very threatening. But when I pointed out to him that Reid’s people might have felt threatened by his actions, he did not reply.

Clearly there has been a fair amount of animosity on both sides. Even if we accept RD’s statement that he does not actually hate Reid, we then have ask why it is he acts like he does. The answer, I think, has much to do with the nature of the Internet. Forums that encourage the spouting of anonymous opinions, such as those sponsored by SA, tend to be steeped in hostility. People post mean, hateful things they are not willing to accept personal responsibility for. It is not a healthy way to communicate.

In this case, too, I think part of the answer has to do with Reid himself. He and this great dream of his, which he has at last realized, appear as a confusing Rorschach blot to the rest of us. His multiple purposes, some of them a bit contradictory, all of them out of the ordinary, present us with a multitude of ways to interpret him. You can pick out the negative bits and focus on those, or the positive bits, or some of each, and construct any sort of Reid you like. The Reid you construct may say something about what sort of person you are. But in most cases, I wager, it probably won’t tell you much about Reid. 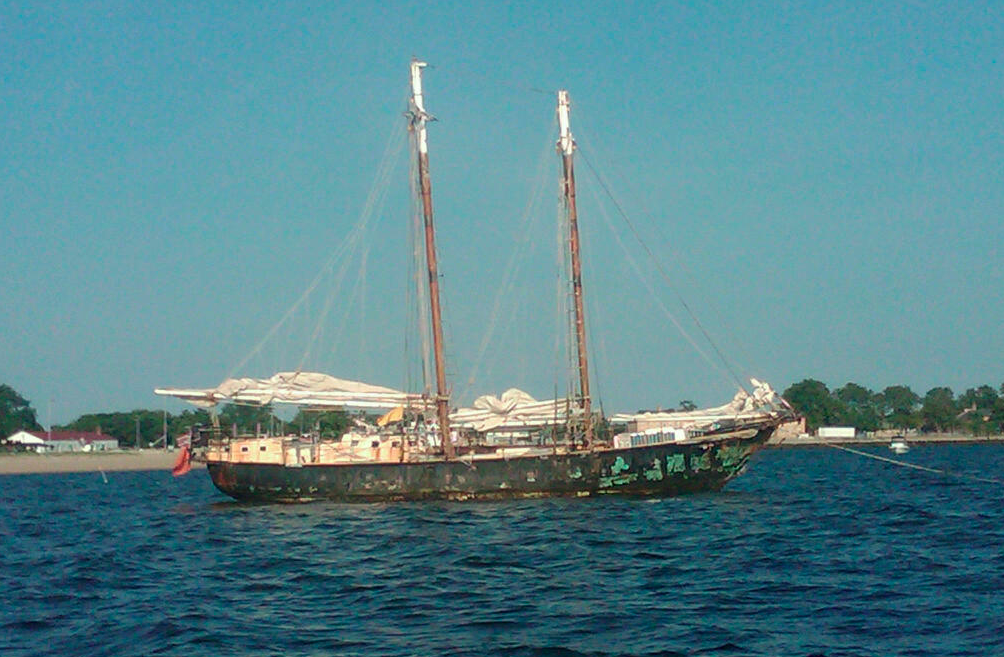 UPDATE: I’m finishing this up on Avocation, which I’ve just boarded with Hank Schmitt and Tania Aebi (along with her teenage entourage). In a few moments we cast off to head down to Sandy Hook to join Reid, who finally cast anchor yesterday, after 1,152 days at sea.