That ugly thing you see here labelled GALE, right under New England, is why I decided to abort my attempt to bring Lunacy home from Bermuda this week. Back when I lived on the boat I was cruising this wouldn’t have been a wrenching decision. There are, after all, worse fates in life than having to wait on weather in Bermuda. Unfortunately, I don’t have the time right now to do my waiting in Bermuda. So crew member Jeff Bolster and I reluctantly crawled onto a Jet Blue plane and “jetted” back here to the mainland, just two days after we flew in and boarded the boat expecting to immediately cast off and sail north.

What a difference 12 hours can make. Last Saturday night, when I checked the weather, it looked like we’d have a reasonable window to work with. The following morning, after packing to go to the airport, I checked again and saw the first glimmerings, five days out, of this burgeoning knot of wind. Of course, back when I lived on boats they didn’t have such things as five-day forecasts, and from time to time I got caught out in nastiness like this. So of course this time there was a small voice in my head telling me I should just go anyway and everything would be fine. I would survive. But it was only a small voice. The louder ones were spouting off about valor and its better parts.

Hoping to game the situation, after we arrived in Bermuda I sought professional advice from Rick Shema, the Weather Guy, who routed Lunacy south last fall. He told me Thursday morning was our earliest reasonable departure window for Portland, Maine, which is where I want the boat to end up. If we headed further west, to New York City, he said we could leave early Wednesday morning and get there in plenty of time for me to greet Reid Stowe on the 16th and 17th. In the end I ruled this out, for scheduling reasons (I also have to be in Maine on the 19th for my mom’s memorial service), and when I rechecked the Gulf Stream charts, I was glad I did. Looks like we would have been bucking some serious current on a passage to New York.

Fortunately, Jeff and I did accomplish something. Lunacy‘s brand new engine was suffering from a mysterious starter disease, which first manifested itself right after I cleared customs back in May. Getting stuck with a dead starter on the customs dock at St. Georges is, I assure you, both embarrassing and extremely inconvenient. Fortunately, I was saved by Sandra Soares, of Bermuda Yacht Services, who organized a tow to get me off the customs dock, helped me wrangle permission from customs in Hamilton to leave the boat uninhabited on a mooring, and organized storage for my dinghy, all in time for me to catch a flight I had already booked to Boston that same afternoon. (I should note, too, Sandra also had organized my mooring, on quite short notice, before I ever arrived in the first place.)

FYI: Bermuda Yacht Services was started by Sandra’s son, Mark, just a few years ago and is already utterly indispensable to transient sailors passing thru St. Georges. They’re now doing everything from assigning spots to boats that want to tie up on the wall, to providing free Wifi service to the anchorage, to wrangling repairs and spares, to babysitting boats for absentee owners like myself. And in the last year, since Sandra’s taken on the job of office administrator, her kind nature, good humor, calm demeanor, and ruthless efficiency have pretty much made her Queen of St. Georges (at least as far as anyone in a boat is concerned).

Anyway… about that starter. While I was away Sandra organized a visit from Anfossi Marine, the local Westerbeke rep, and I was mortified to learn that the engine started right up for them–no fuss, no muss. It also started right up for Jeff and me when we showed up on Sunday afternoon. After we dropped our mooring and were running down the harbor, we noticed Dowlings fuel dock was both open and empty and thought we should stop and top up while the topping was good. Jeff was already hanging fenders when I abruptly vetoed the idea, having been plagued with visions of getting stuck with a dead starter at the fuel dock. This, if anything, would have been worse than being stuck on the customs dock.

Sure enough, after we anchored and later tried to restart the engine, it was resolutely silent. The problem in the end was pretty simple (as I hoped it might be), just a loose connection on the starter’s solenoid wire, which Jeff and I were able to replace on our own.

Later, while strolling about the waterfront, we were utterly amazed by this boat, which was bristling with intriguing features: 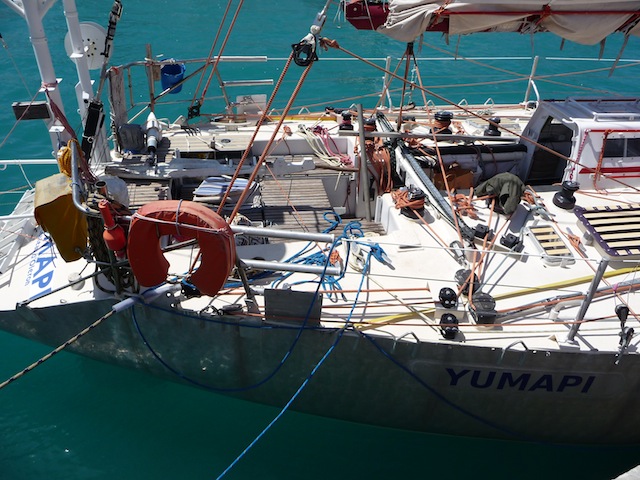 A cockpit with enough control lines to confuse a spider. 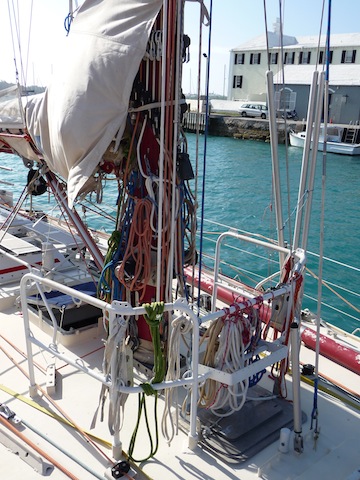 Ditto on the mast. 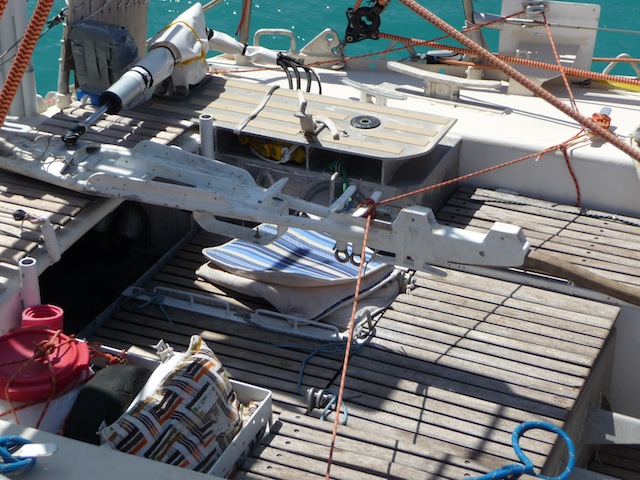 An industrial-grade tiller with three cleats on it. (I may copy this idea, though I think one cleat should be enough.) 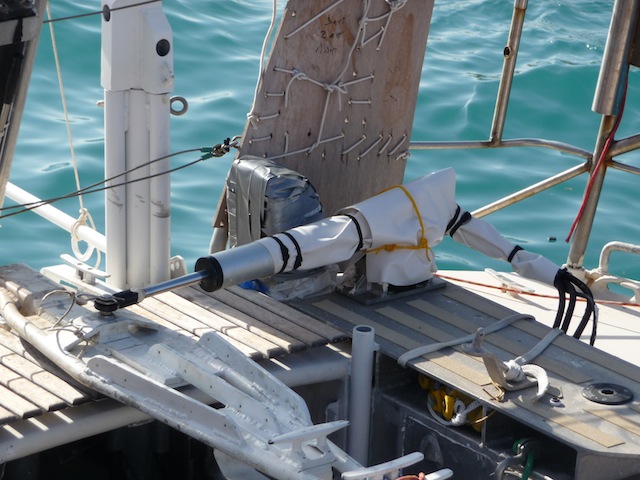 A belowdeck autopilot mounted on deck, all wrapped up and shielded with a plywood dodger to protect it from weather (or so we assumed). 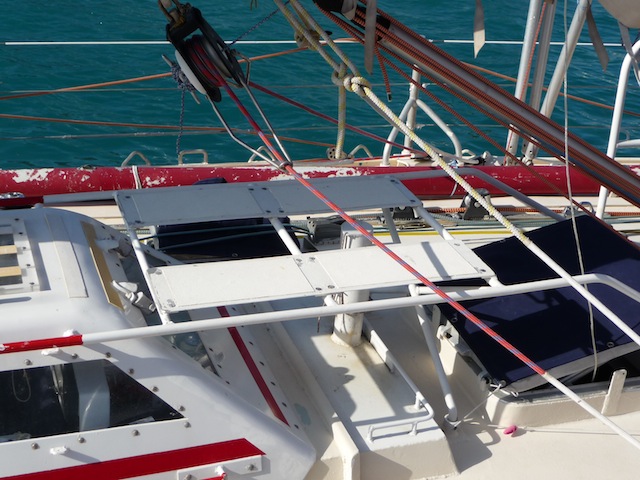 A nice shelf under the boom to stand on while flaking the mainsail. 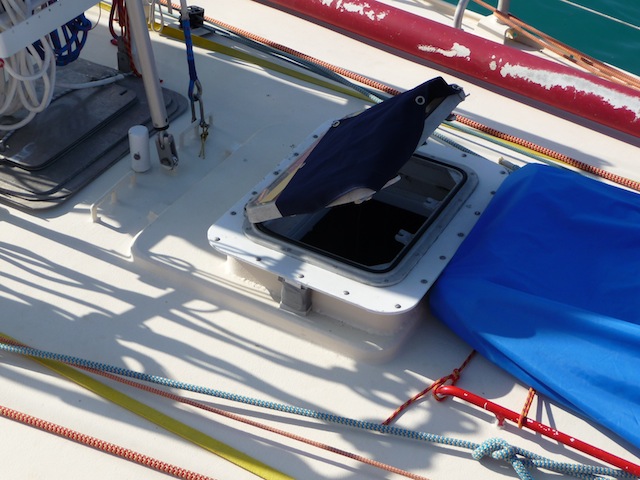 Raised hatches to reduce the likelihood of leaks. 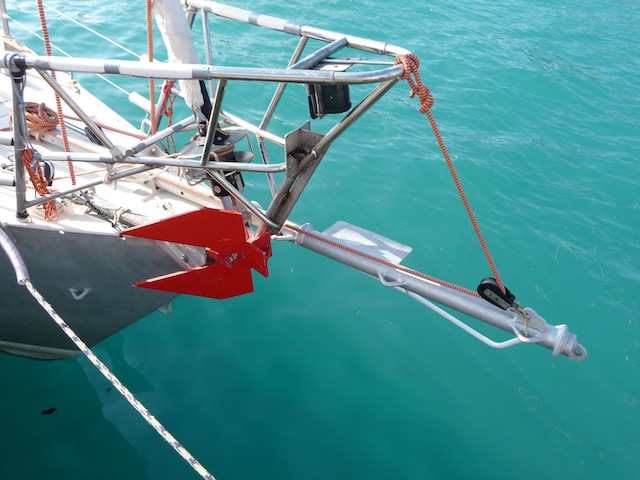 And the obligatory asymmetric sprit, but with a foot rail welded on beneath it. 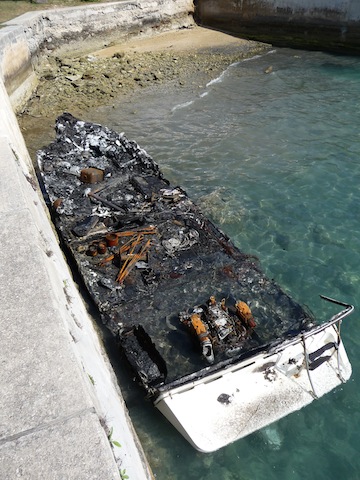 We also found this boat, most of which has somehow succeeded in combining with the oxygen in the atmosphere.

Our current plan is to return to St. Georges on the 21st and at last complete this interminable delivery. I’ll keep you posted on developments.