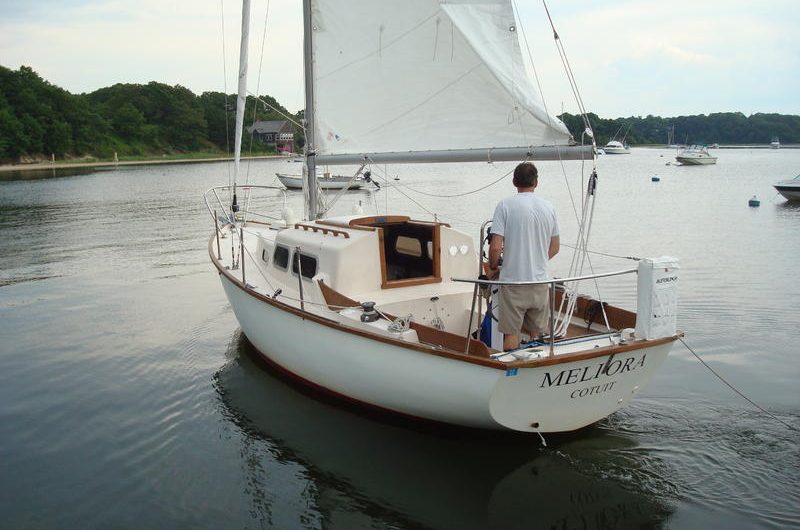 The Tartan 27 is sometimes hailed as the first fiberglass boat ever to be designed by Sparkman & Stephens. This, however, is not quite accurate, as a few years prior to its creation S&S designed a similar, but slightly smaller glass boat, the 25-foot New Horizons, for Ray Greene. The introduction of the Tartan 27 in 1961 is said to have ruined the market for the earlier boat, a fact that Greene always resented.

The 27 was the first Tartan ever built, though its builder was originally known as Douglass & McLeod Plastic Corp. and did not reorganize as Tartan Yachts until 1971, after its first plant in Ohio was destroyed in a fire. All told 712 Tartan 27s (including 24 built under license by W.D. Schock in California in the mid-60s) were launched over the course of an 18-year production run, making it one of the more successful fiberglass auxiliary sailboats built during the CCA era.

Unlike larger CCA boats, the Tartan 27 has short overhangs, but also sports a shoal-draft full keel and centerboard as popularized by Carleton Mitchell’s Finisterre. In typical CCA fashion, the 27 was also sold as both a sloop and a yawl, though very few of the latter were ever built. It was a successful racing boat in its prime, both on a one-design and handicap basis, but ultimately has endured as a great low-budget pocket cruiser. Most every hull built is still afloat, though a relatively small percentage are ever on the brokerage market at one time, as owners tend to cling to them.

Construction is typical for an early fiberglass sailboat. The hull is solid laminate composed of mat and woven roving set in polyester resin and built to heavy scantlings–3/4” thick at the keel–with tabbed bulkheads and glass-reinforced stringers helping to stiffen the structure. The deck is balsa-cored with plywood sustituted under deck hardware.

As with many old balsa decks there is a good chance areas will have delaminated over time as moisture invades the core, particularly around the chainplates. The original deck joint, which is “mechanically and chemically bonded,” according to old brochures, is very secure and reports of leaks are rare. The lead ballast in the first 200 or so boats was external, but in 1966 was increased by 350 pounds and encapsulated in the keel. Likewise, the centerboards on the first dozen boats built in 1961 were bronze, but on subsequent boats were steel sheathed in fiberglass.

Like any older boat, the Tartan 27 has weak points that sooner or later must be addressed. These include the wood maststep over the keel, which eventually rots and needs replacing; the rudder post, which lacks a bearing that should be retrofitted; the fuel tank (on some boats), which may leak and if so should be replaced; the centerboard, which is prone to wear at its pivot point and eventually wants replacing; the gate valves threaded on to brass through-hull fittings, which should be replaced with proper seacocks; and a lack of backing plates under deck hardware, which also should be retrofitted. The boat is certainly worthy of the attention, however, particularly as its overall finish quality is superior to that found on most production boats of similar vintage. Many Tartan 27s, in spite of their age, are extremely well cared for, a process facilitated by the builder, which still sells critical replacement parts like centerboards, tanks, hatches, and rudders.

By modern standards the Tartan 27’s original accomodation plan is cramped and awkward. This features a small dinette to port in the saloon opposite a small midship galley aft of which is a somewhat exposed quarterberth. Because the stove is fixed and the outboard sink floods when the boat heels to starboard, the galley is not too useful while underway. The icebox is also unusual, as it is to port, overhanging the aft end of the dinette settee, with access hatches both inside the cabin and out in the cockpit. Up forward there is a good-sized V-berth, but the head compartment behind it is quite tiny.

In 1977 the boat was redesigned, with a raised sheerline and a longer, rounder cabinhouse to increase interior living space. The revised accomodation plan on the 27-2 (as it was designated) is more conventional and liveable, with an aft galley opposite an icebox/nav desk, two long settees between a fold-down table, plus a larger athwartship head. The great drawback to the 27-2, 63 of which were built before production finally stopped in 1979, is that–to my eye, at least–it is not nearly as attractive and shippy looking as the original. Also, raising the sheer without changing the hull mold required a much more vulnerable outward-facing deck joint. 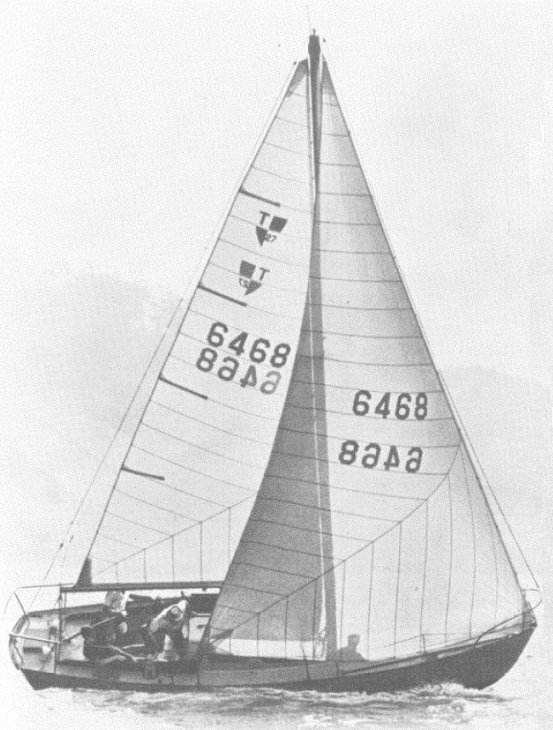 Because of its relatively long waterline, the Tartan 27 does sail faster than you might otherwise expect, especially on a reach, but compared to much lighter, more contemporary boats it inevitably seems a bit slow. It is, however, very well balanced, so much so that one can steer it by letting go the tiller and shifting the centerboard up and down. Like many CCA boats with slack bilges it does heel quite easily, leaning to an angle of about 20 degrees before stiffening up. Usually, though, it sails best when kept more upright, so it is wise to reef early. When overpowered the boat also does develop quite a bit of weather helm, but otherwise is moderate in its habits and is easy to sail singlehanded. The later version, it should be noted, does not sail much differently than the first, as Tartan was careful to preserve parity for the sake of what was then a lively one-design racing class.

Performance under power is very much a function of what engine is installed. The original standard powerplant was the venerable 30-hp gas-driven Atomic 4, which reportedly drives the Tartan 27 at hull speed with the throttle just half open. In the mid-70s a smaller 12-hp two-cylinder Farymann diesel engine was offered and evidently became standard in 1977 when the boat was redesigned. The Farymann by all accounts is too weak to drive the boat well, causes excessive vibration, and requires expensive replacement parts. Some Tartan 27s have been repowered, but many are still equipped with their original engines, presumably because the boat is so inexpensive it is hard to justify splurging on a new one. To my mind, however, it makes more sense to buy an older boat with an Atomic 4 at a discount and invest the difference toward an appropriately sized new diesel than it does to pay extra for a funky undersized Farymann. 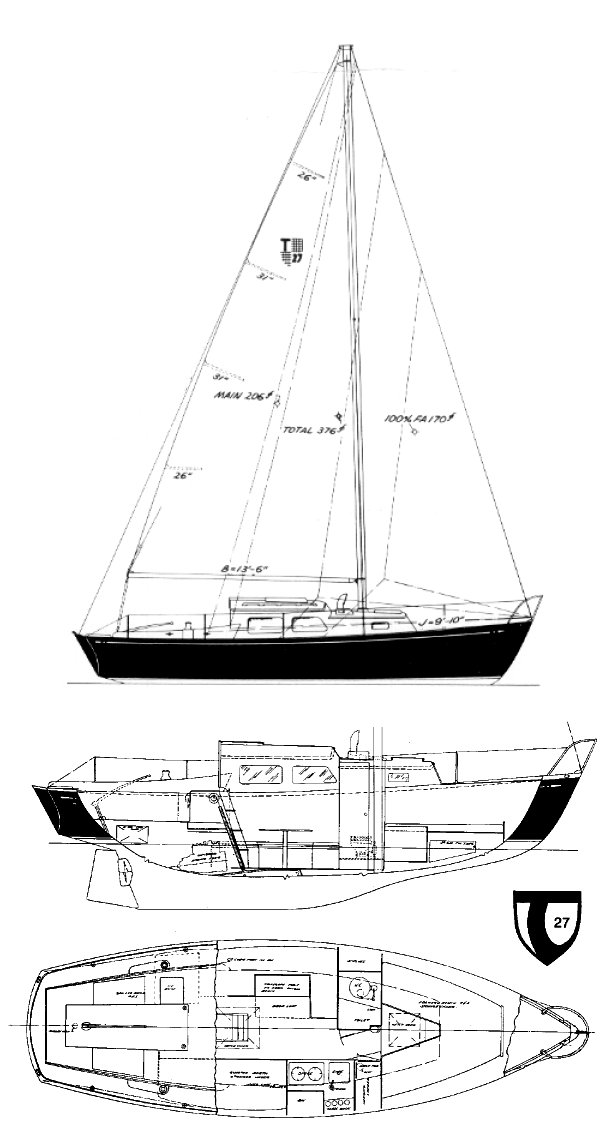