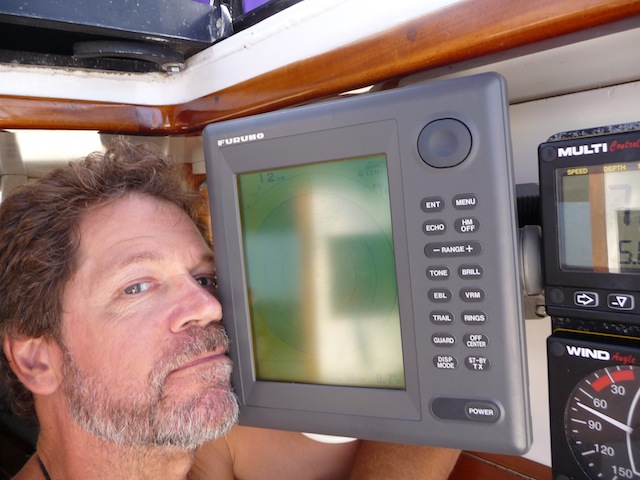 Lunacy is the first boat I’ve ever had that is equipped with radar. Initially I didn’t use it much. I know some curmudgeons who still swear it’s their first choice when it comes to navigation electronics, but in the age of GPS this just seems perverse to me. Interpreting glowing globular clusters for clues as to my whereabouts has never been one of my special talents. I’m also not much good at reading chicken entrails.

During solo offshore passages, however, I’ve come to worhsip my radar. It solves the biggest problem any singlehander must face, which is SLEEP. As in how to get some without just rolling the dice on whether some huge freighter is going to run you down like a bug.

Like most semi-modern radar units, Lunacy’s rather dated Furuno 841 Mark 2 set has both a guard feature, which sounds an audible alarm when a radar target appears within a user-defined “guard zone,” and a watch feature, wherein the unit runs on stand-by and wakes itself up at pre-determined intervals to sweep briefly for targets. This makes it possible to leave the set running continuously while you’re sleeping without sucking down a sailboat’s battery banks.

Interpreting a radar display on the open ocean is dirt simple. Typically, you see only two types of targets, big ships and squalls, and they’re easy to tell apart. The ships look like little lozenges; the squalls look like blobs. Both are guests you want to wake up for. My practice is to get up any time the radar alarm sounds, and to stay up until the target that provoked it leaves the guard zone. I never set the alarm perimeter for anything less than 12 miles, so this means sometimes I’m staying awake much longer than necessary watching targets that pose absolutely no threat. I’m not willing to shrink the perimeter, however, to exclude harmless targets just so I can go back to sleep. I figure 12 miles is the minimum distance I need to get up and react to a ship that’s heading straight at me.

The one big problem with my radar, I found on the passage I just made from Tortola to Bermuda, is that the alarm probably isn’t loud enough. Indeed, it isn’t a proper alarm at all. Really it sounds more like a sheep bleating. The bleat is enough to wake me up if the boat is sailing, even when beating to weather in brisk conditions, as was the case during the first part of this most recent passage. But I’m not sure about when the motor is running. The latter part of my trip this year was non-stop motoring across a big zone of high pressure south of Bermuda, and not once during this part of the passage was I woken by the alarm. The ships I did catch I just happened to be awake for. Either way, this was lucky. No ships passed while I was sleeping, or those that did managed not to run me down while I slept through the alarm being drowned out by the engine.

I like being lucky, but I don’t want to count on it. First feature I’m looking for on the next radar I get is a REALLY LOUD OBNOXIOUS ALARM. Best would be a volume control, so I can listen to the sheep bleating when I’m in the mood.

I find I eat very little when at sea by myself. A lot of food consumption is merely social, and when you have no society it’s very easy to cut down on calories. It’s also a pain cooking for only yourself, particularly when the boat is jumping up and down like a bronco that’s trying to throw you off.

You do need to keep your strength up, so a radical fast is ill-advised. It’s best to bring along things you like that are both nutritious and easy to prepare. My favorite snacks this year were chunky salads with greens, tomatoes, carrots, artichoke hearts, and canned sardines. This was all I ate until I ran out of everything but sardines. Then I switched to soft-boiled eggs and cheese, plus the occasional sandwich. 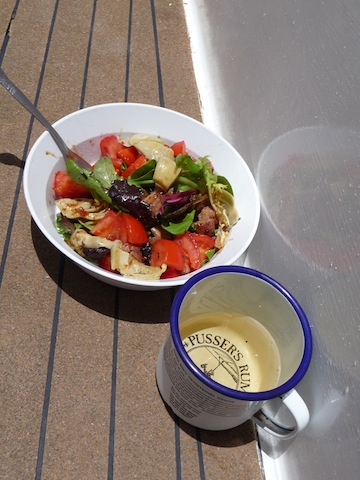 Get yourself an asymmetric spinnaker you can tack down to the bow (or even better, a sprit) and set it all by yourself with a snuffer. This will keep you sailing when the wind is light and you can’t bear the thought of motoring. I got to use mine this year for a few hours before I finally bit the bullet and fired up the Westerbeke. My wife is always complaining about having the extra sail bag aboard, but whenever I get to set the chute I’m a very happy camper. 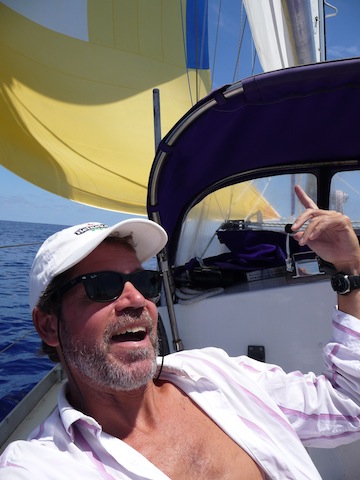 You don’t need to be a hermit, but you do need to be able to spend time on your own. It helps a lot if you can stare at the horizon for hours on end thinking profound thoughts only you could possibly understand. 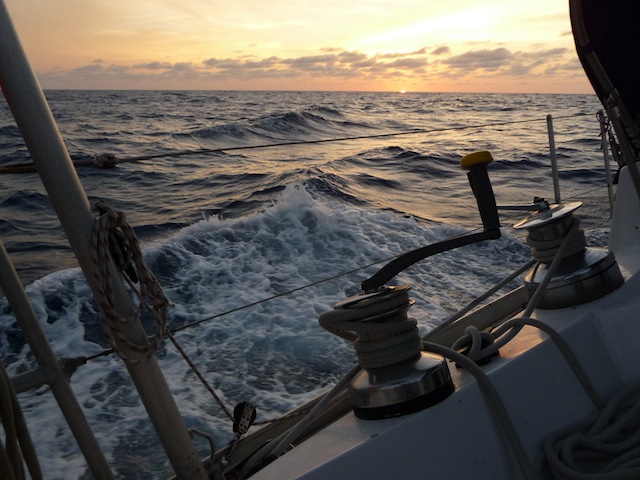 One of the books I read during this last passage was Voyaging by Rockwell Kent. I’ll tell you more about it later in a Lit Bits post, but meanwhile I wanted to share this one quote with you:

Only the voyager perceives the poignant loveliness of life, for he alone has tasted of its contrasts. He has experienced the immense and wild expansion of the spirit outward bound, and the contracted heartburn of the homecoming. He has explored the two infinities–the external universe–and himself.

Only the voyager discovers–and by discovery he generates. For of man’s universe, which is but that portion of the infinite which he perceives, he is, by his perception of it, the creator. Thus in his own image has man created God.

If this statement seems extremely true to you, you should probably give singlehanding a try.