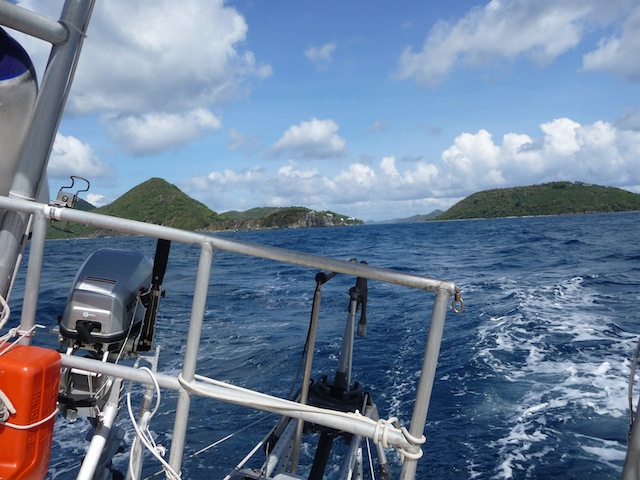 Only once before have I departed the W’Indies for Bermuda from the BVI. That was in ’97, on Crazy Horse, out of Jost Van Dyke (or Just One Dike, as the famous Foxy Callwood sometimes refers to it). I remember Jost as being a perfect orifice from which to excrete oneself into the North Atlantic. It is very low key. Back then the one customs and immigration officer (who was also the police force) wore shorts and a T-shirt and was quite laid-back. It also offers immediate access to the Big Blue Yonder.

I thought briefly about leaving from there again this year. But this made little sense. Lunacy was already ensconced at Village Cay Marina in Road Town, ex post family cruise, waiting for me to take her away. Road Town not only has an immigration office, but also supermarkets and fuel docks (or so I thought). Logistically, if not aesthetically, it makes a better point of departure than Jost.

If leaving from Road Town, Village Cay is definitely the place to do it from. For one thing, it’s just one block from Bobby’s Marketplace, which near as I can tell is by far the best place in all of the BVI to provision for a long voyage. Bobby’s doesn’t look like much on the outside–a mere hole-in-the-wall next to Bolo’s Department Store, which itself looks like a hole-in-the-wall (albeit a large one). But once inside you’ll find a wide array of edibles, much of it high-end trendy stuff dear to the tummies of North Americans. Dragging all your food to your boat is no problem, as no one seems to mind if you just push your shopping cart all the way back to the marina.

Village Cay, unlike every other marina in town, is also just a short walk from the immigration office. This is a real office, however, with uniformed officials and ferries that come and go, so you must be polite and also be prepared to wait your turn. The morning I stopped in the customs guy was as nice as could be, but the immigration lady treated me like an escaped convict. She was all wore out, I think, from the two ferries full of tourists that got there before me. 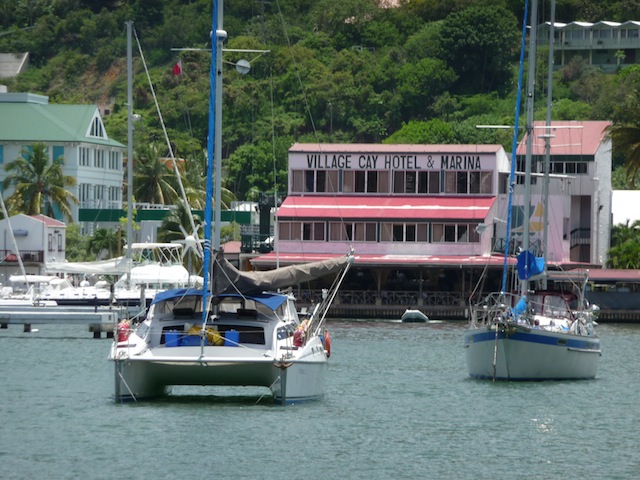 Perhaps the best thing about Village Cay Marina is that it often smells vaguely of sewage. When finally it comes time to cast off and sail away, you therefore are glad that you did.

I did not succeed in taking on fuel at Road Town. Village Cay has (or had) a fuel dock, but I was told it wasn’t working. I don’t know if this is a permanent condition. At the Moorings/Sunsail/Footloose marina, just across from Village Cay, there are in fact two fuel docks. The dockmaster at Village Cay assured me they’d be happy to sell me fuel over there, but this wasn’t true. Both docks were full of charter boats getting cleaned for their next outings, and I was waved off without ceremony or apologies. 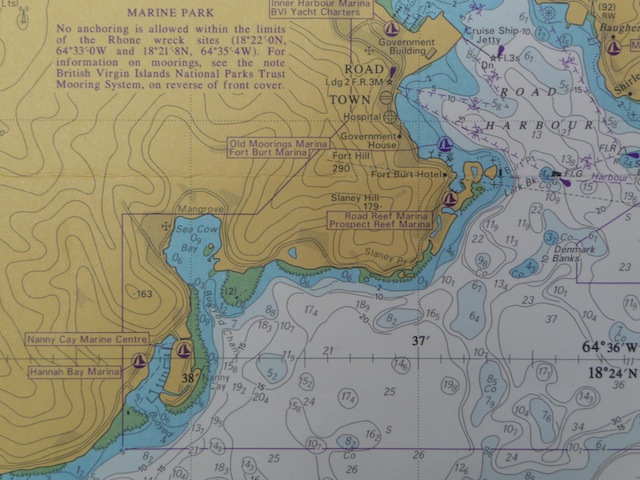 Rather than waste time noodling down into the Fort Burt Marina, located in a tight spot in a leeward corner of the harbor, I carried on to Nanny Cay, just a short distance west down the coast. Nanny Cay is a big-time operation, and it seemed unlikely they’d have stopped selling fuel there. But to my dismay, as I entered, I saw their big Shell sign had been taken down and was lying on the ground.

Not to worry. The fuel dock was both open and gloriously vacant. The man on the pump was very interested in Lunacy.

I liked the way he emphasized the adjective. I told him I was going to Bermuda, and he said he’d like to go too. I said I’d be happy to have him, as I was alone, but I was leaving now… as soon as my tanks were full.

On my way out I saw they were erecting a new sign to take the place of the old one. It said Spot instead of Shell.

As soon as I was outside Nanny Cay, heading west again down Tortola’s south coast, I unrolled the jib. Motorsailing, with the wind dancing first about my stern, then about my beam in fickle gusts, I squeezed through the gut at Soper’s Hole. Once clear of Tortola, I raised the mainsail and shut down the engine. 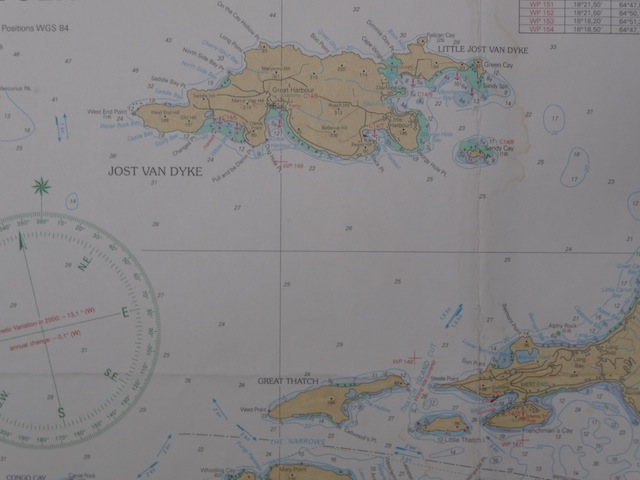 Ahead, just to the north, lay all of Jost Van Dyke in profile, looking much as it did all those years ago. As I drew closer I got out the binoculars and inspected the boats at anchor in White Bay and Great Harbor. I remembered the last time I lay at White Bay, back in ’99. Snorkeling there in a vast, dense cloud of minnows that opened suddenly, like a curtain, on a grim pair of enormous barracuda looking for a bite to eat.

As I sailed on toward the island’s West End, first Great Harbor then White Bay were lost to view. Past West End, to the north, there stretched open water, firmly corrugated by the easterly tradewind, as far as the eye could see.