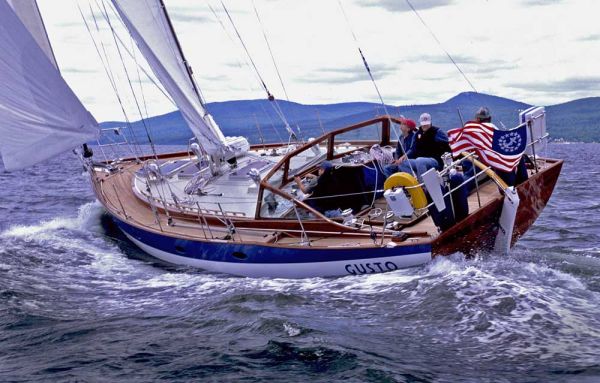 Here’ s a fantastic opportunity for someone to pick up a very swell boat for a fraction of what it’s really worth. This custom one-off cruiser/racer was designed by Chuck Paine for a private client and was first launched back in 2002. I test-sailed it soon afterwards and persons involved in its creation advised me confidentially the build cost was over $800K. The boat has been listed for sale for years now, and the asking price is currently down to $399K. Even better, the original owner already has another boat.

Gusto, as she is now called, offers an excellent example of how traditional design concepts can be blended with more modern concepts and building materials to produce a very unique and appealing vessel.  She is one of several “modern traditional” cruising boats Chuck Paine helped to create in latter part of his career (he is now retired and is hard at work on a book about the boats he has designed).

Central to Gusto’s design is a creative reinterpretation of a full-keel hull with an attached transom-hung rudder. The canoe-shaped hull form does not present a classic wineglass section with soft bilges. Rather the bilges are much harder, though not flat, and the keel joins the hull at a near 90 degree angle. The keel itself, though it has a classic cutaway profile forward, is in fact a carefully shaped NACA foil.

The profile aft, meanwhile, is distinguished by an enormous curved aperture encompassing all of the keel’s trailing edge, such that the keel in effect is a long swept-back fin, the trailing bottom tip of which happens to support the rudder heel. Besides reducing wetted surface area, the huge aperture also allows a portion of the rudder to be moved forward of its pivot axis, thus alleviating helm loads, so the boat can be steered with a simple tiller instead of a wheel. To further relieve the helm, the rudder is a lightweight high-aspect foil, constructed of carbon fiber and weighing but 73 pounds. In that all of its leading edge is exposed to water flow, the rudder essentially functions as a semi-balanced spade and is thus quite efficient.

Above the waterline Gusto strongly reflects her commissioning owner’s preferences. He liked the idea of a flush deck, but was unwilling to let his boat grow too large. He also wanted plenty of headroom below for his 6’2” frame. To achieve this without raising the boat’s sheer line so high as to offend aesthetics, Paine drew an extremely low-profile cabin house just 6 inches tall. Seen in profile the boat reads as a flush-deck vessel; when working on deck it feels like one, too.  Viewed from overhead, the house’s forward end is pointed rather than square and thus rather elegantly echoes the shape of the bow. The original owner also wanted a fixed windshield to protect the cockpit, and Paine obliged with a traditional Down East-style fixture that blends in well with the broken sheer line, whale stripe, and elliptical windows set in the hull.

Gusto was built by French & Webb, a very high-end shop in Belfast, Maine, that specializes in cold-molded wood construction. The boat’s hull, 1-3/8 inches thick, is composed of an exterior layer of strip-planked mahogany, three intermediate layers of diagonal red cedar veneers, and an interior layer of strip-planked Douglas fir, all vaccum-bagged and laid up in epoxy. For abrasion resistance, the hull is sheathed with two layers of 9-ounce E-glass cloth, also set in epoxy. Strong floor timbers tie the keel to stringers that help distribute the load from the external lead ballast. The keel itself is of stack-laminated wood and is strengthened in its fine aft section with extra S-glass sheathing. To save weight there is no interior framing. Instead the hull skin above the keel root is entirely supported by interior bulkheads and furniture components. The interior joinery is absolutely first rate and features Herreshoff-style trim and beautiful white beaded-panel bulkheads, including a gorgeous oval-framed partial bulkhead aft. 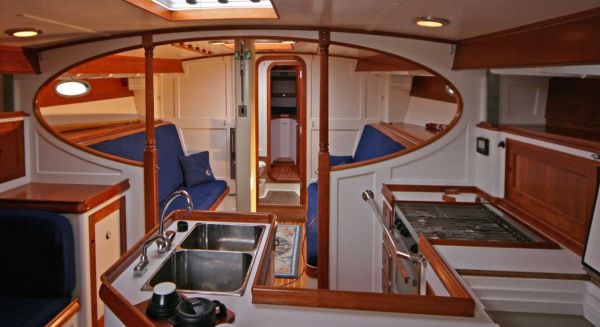 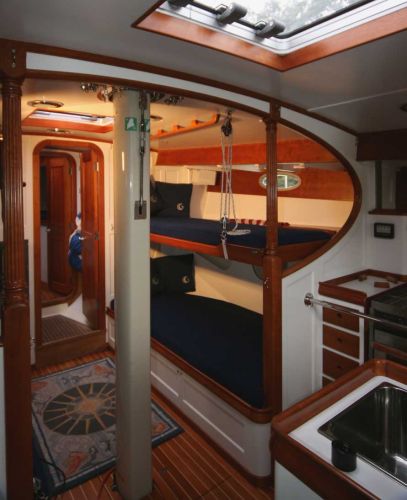 The accomodation plan is traditional, with a no-nonsense emphasis on sea-berths. The seatbacks of the two straight settees in the saloon swing up to form adjustable overhead pilot berths. There is a V-berth forward, plus a large double quarterberth aft, so all told the boat can sleep eight in harbor, or five very comfortably at sea. There are two separate heads, both fitted with showers. Both the galley and nav station, just forward of the companionway, are large and secure with lots of modern gear and conveniences. Behind the aft head to port there is also a great systems space through which the 56-hp Yanmar diesel engine (mounted facing aft with a V-drive) can be easily accessed and serviced.

Gusto’s rig, meanwhile, is much more modern than traditional. The sail plan, a straight “slutter” rig with a detachable inner forestay that can support a hanked-on staysail or storm jib, is rather conventional for a bluewater cruising boat. Materials, however, are thoroughly contemporary. The spars are all carbon fiber; the standing rigging is all lightweight Navtec rod, with a hydraulic adjustable backstay. The sail inventory boasts a full suit of both cruising sails in Pentex and Dacron and racing sails in carbon fiber and Spectra. To help with the grinding when tacking, there’s also a pair of electric primary winches in the cockpit. There is also a detachable carbon-fiber bowsprit up forward to facilitate the flying of large asymmteric spinnakers.

I sailed Gusto in a fresh 20-knot breeze on Penobscot Bay. With her somewhat beamy, hefty full-keel hull and lightweight rig she has both good form stability and a low center of gravity and is therefore quite stiff. It is difficult to put her rail underwater. She also has a very smooth, easy motion in a seaway and tracks quite well. Her shrouds are well inboard, so sheeting angles are narrow, and the boat is closewinded, but does not pound sailing to weather.

In terms of raw speed Gusto can’t keep up with a modern lightweight racing sled, but she is certainly no slouch. During my sail, we surged along at well over 8 knots and occasionally topped 9. As promised, though the boat weighs as much as a modern 50-footer and boasts a large sail plan, I found her easy to handle under tiller alone. Under sail she is very well balanced. I can’t pretend her helm was always feather-light, for the tiller did load up a bit when gusts came barreling through, but it was never unmanageable and never required more than one hand to control.

I love this boat and if I had the money I’d buy it myself with quickness. I consider it one of Paine’s best designs, and the build quality is absolutely impeccable. If you’re in the market and are liquid, you’d be a fool not to check her out. 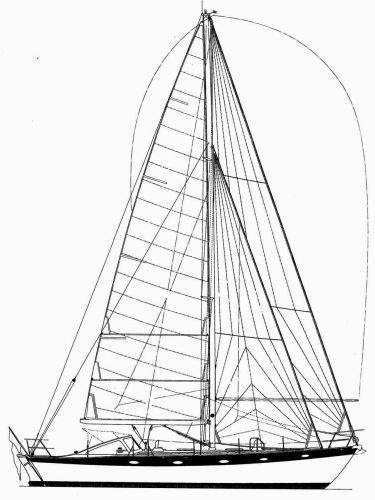