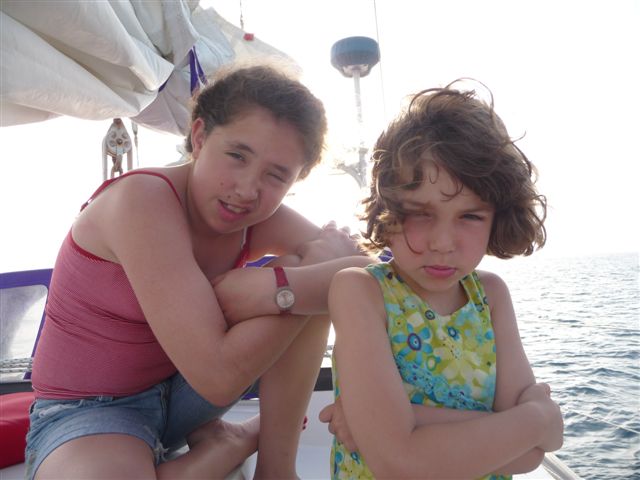 Just back yesterday from another great cruise with the family aboard Lunacy down in the W’Indies. Thought I’d try a little experiment this time and subject them to a mild open-water passage twixt St. Martin and the British Virgin Islands, both so we could vary our cruising ground and to see how the girls would take to being out of sight of land. Here’s a hot tip for those inclined to follow in my wake: take the trouble to get out a chart and calculate the time and distance involved before pitching such a venture to your crew. I’ve done the trip several times, so relied on my increasingly creaky memory and consequently told my shipmates I expected we’d take only 8 hours and a bit to get from here to there.

Even as we motored out of the Radisson Marina at Anse Marcel, Lucy the Youngest (predictably enough) immediately asked: “How much longer till we get there, Dad?”

In the interest of accuracy (for Lucy has a much better memory than me) I queried the GPS and found we in fact had about 80 miles and 18 to 20 hours to go at our then current speed of 4.5 knots. In the photo up top you see how Lucy and her older sister Una received this news.

In the end, however, it worked out well enough. We had only a 10- to 15-knot tail wind, so we never much improved on that average speed, but we were never so slow we felt compelled to start the engine. There was, unfortunately, an aggravating northerly swell that set us rolling more than we would have liked. This roiled some tummies, but once the sun was down we had a fine full moon to light our way across Anegada Passage. After the girls finally started dozing in their berths below, Clare and I took turns napping and keeping an eye out, and–eventually–we did get where we were going.

I picked St. Thomas Bay off Spanish Town on Virgin Gorda as our target anchorage, as it is open and easy to both approach and settle into at night. Plus Spanish Town has an immigration office, so you can book in there straight away. If arriving in daylight I would I have aimed for the smaller passage between Fallen Jerusalem and the Baths at the south end of Virgin Gorda to get around to the island’s lee shore. But I really didn’t want to grapple with the rocks in the middle, called The Binders, in the dark of night, even with a big moon out. Instead I aimed for Round Rock Passage, which is clear of obstructions and easy to make out visually (thanks in large part to the light just south of it on Ginger Island), even when the moon is down. 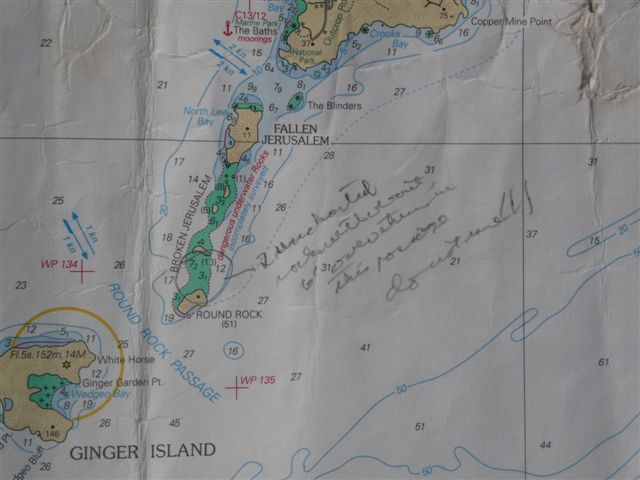 On digging through my paper charts for the area, I found I had several given me by Don Street, who had scrawled cryptic comments on them in an effort to prove to me (for the umpteenth time) the superiority of his own Imray-Iolaire charts. You’ll see here he has something unintelligible to say about some uncharted rocks he discovered just north of Round Rock itself. My chartplotter also warned me in no uncertain terms that passing north of Round Rock is a very bad idea. I’d be willing to wager than Don is the only person who has ever tried it, which is one reason why his charts are indeed quite accurate.

We spent a day lolling about the anchorage at Spanish Town, swimming and catching up on sleep. On going ashore to check in, I sorely missed the laxity and convenience of checking in by computer, as is the rule now in the French West Indies. Over in the BVI they’re still doing things the traditional way, with grumpy officials and six different paper forms to fill out (for a crew of four). Plus they charge money. 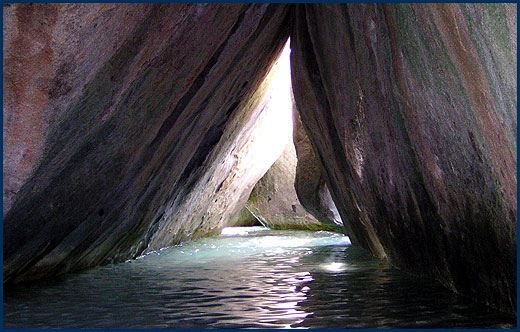 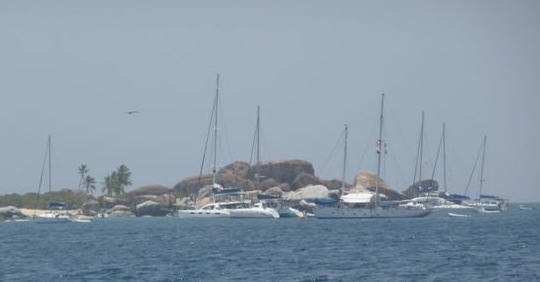 Very early the next morning we staged a big amphibious raid on the Baths, just a couple of miles south of Spanish Town. If you’re cruising the BVI with kids this is a must-visit attraction. Getting to crawl and wade through this enormous maze of seaside caves and boulders is an experience that will fire any sapient child’s imagination. The only problem is everyone else wants to go there, too. If you get there by 6 a.m. and are ashore by 7 at the latest, you’ll be sure to get a mooring (anchoring is strictly verboten) and will likely have the whole place to yourself until about 8, when like clockwork a vast horde of shorebound tourists will suddenly appear like locusts. Your kids will grumble beforehand at having to get up so early, but afterwards they will worship you.

From the Baths we moseyed up to North Sound, where we spent the night off the Bitter End. In the morning we went ashore to enjoy their pool and met a very large iguana named Mike. Afterwards we sailed south again down to Cooper Island, which I had never visited before. En route, in one of those delicious coincidences that makes the entire cruising community seem like a vast extended family, we were chased down just off the Dogs by a Moorings catamaran being sailed by Bob and Carol Petterson. These are the folk who sold us Lunacy just a few years ago. They announced they were pleased with her appearance (and by implication our stewardship) and promised (for the umpteenth time) that they would come to visit her in New Hampshire during the summer. Bob was also impressed that I’d already heard via the grapevine that he’d recently been in a motorcycle accident.

Cooper Island, for me, was a minor revelation. I’d always avoided it in the past because the anchorage there (now mostly just a mooring field) seems a bit too open and exposed for my taste. Conditions this time were light enough that I was willing to give it a try, and I’m very glad I did. The Cooper Island Beach Club, an eco-friendly off-the-grid mini-resort, is everything the rest of the world should be and is proof positive that you can live large and have a good time while leaving a small footprint, even if you don’t live on a cruising boat. 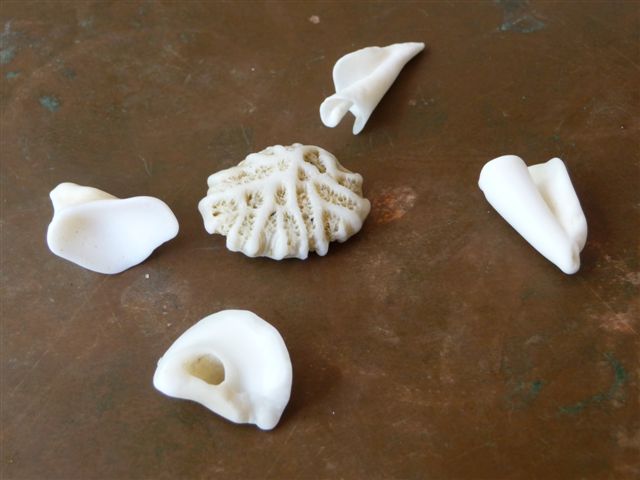 The beach is littered with very cool ocean-polished shell and coral remnants, and… 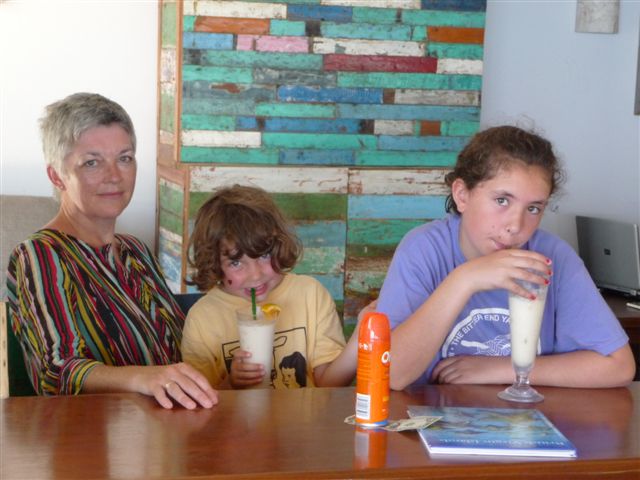 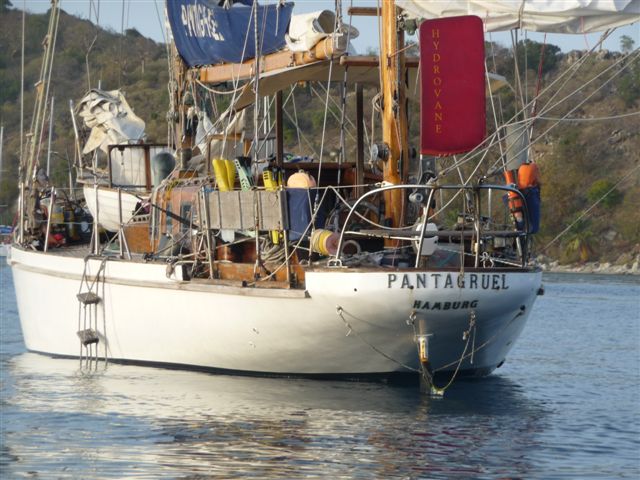 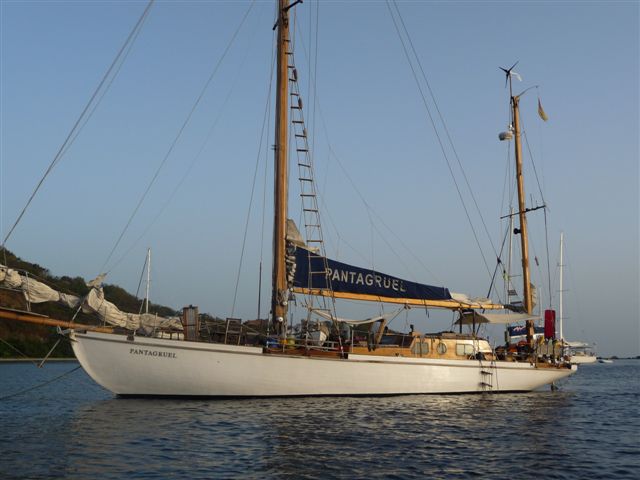 Plus, check this out. This Rabelaisian vessel, an antique wood yawl with German license plates, seems to spend a lot of time moored off Cooper. I was especially interested in her unique through-the-deck Hydrovane self-steering system. But the girls liked the look of the hammock under her boom.

Post Cooper we spent a night and a day at Peter Island, watching jacks hunt minnows around the boat, then reluctantly pulled into the Village Cay Marina in Road Town on Tortola, where we prepared for departure. Our last night before flying out we ate at a fantastic restaurant–The Dove, with an independent lounge called the Bar Fly–which has by far the best food I’ve ever enjoyed in the BVI. It’s just down from Pusser’s in Road Town, on the same side of the main road leading west away from the center of town.

Be sure to check it out next time you’re there. And be sure to make reservations.

PS: If you like this post and think I should get paid to write this blog, please click here. The link will take you to BoaterMouth, where you’ll find many other blogs about boats.