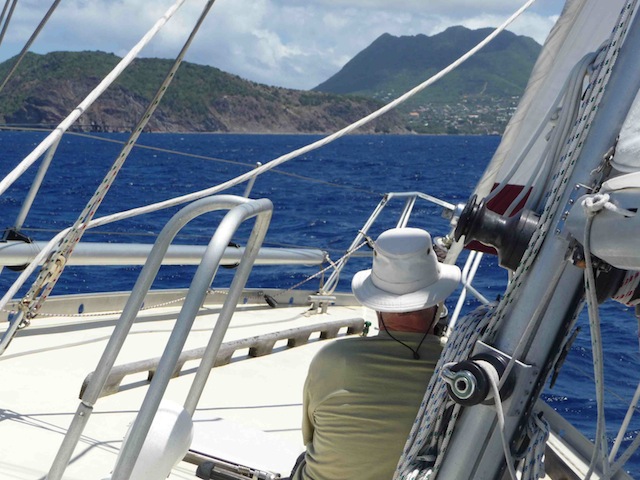 Team SEMOSA had to beat hard to windward to get from Saba to St. Eustatius, better known as Statia, but still it was a most enjoyable sail. The breeze was blowing 18-20 knots, just a shade north of east, but the sea state was relatively flat. With one reef in Lunacy‘s mainsail it took us just three boards (port, starboard, port) and four hours underway to make good about 20 miles to the southeast. It was during this beat that I noticed the fractured mainsheet block swivel about which I bloviated earlier. Fortunately, it did not cause any problems.

Like Saba Statia has no proper natural harbor, but unlike Saba most of the leeward side of the island has some protection from the north, as the island is pitched on a northwest-southeast axis. The anchorage is also far superior, as there is a much larger area of relatively shallow water over a great expanse of clean sand. There are now several dedicated guest moorings in Oranje Baai (again, look for the yellow mooring balls) off the main town of Oranjestad, but you needn’t despair if you show up too late to get one. You’ll be just as secure and comfortable lying on your own hook.

In terms of its topography Statia is far more fortunate than Saba in that it is a saddle–two clumps of high land with a large chunk of low land in between–rather than an undifferentiated heap of altitude. Features like roads and airfields were therefore relatively easy to install, and it is also not hard to get people and things ashore from a boat. Though the two islands are close neighbors, their historical zeitgeists are very different. Where Saba was always quite isolated from the world, Statia in its prime was practically the center of it. During the 18th century the island, known then as “The Golden Rock,” was a major international free port and transshipment point for trade through out the hemisphere. Hundreds of vessels routinely lay in the roadstead, the “Lower Town” of Oranjestad at the foot of the cliff that runs along the western shore was thick with wharves and warehouses, and the local population, by some estimates, exceeded 20,000 souls. This included a very wealthy group of about 8,000 or so Jewish, Dutch, and English merchants. (The total population today, by comparison, is only about 3,000.) 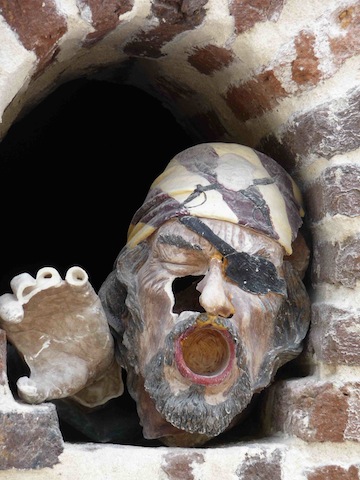 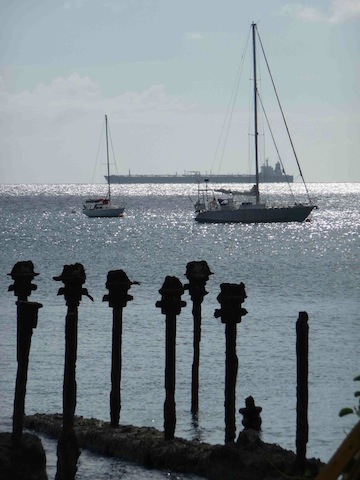 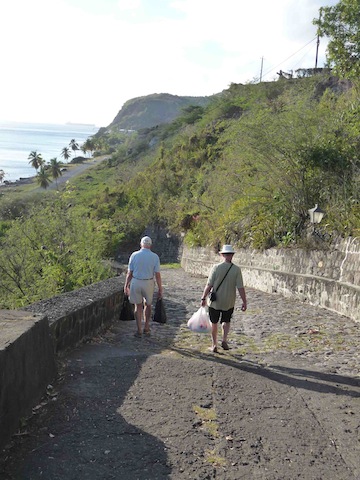 Among many other things, Statia back then was host to a lively trade in weaponry and played a critical role in arming American rebels during our War of Independence. To this day islanders take great pride in claiming that the first international recognition of an American flag (flown from the American merchant vessel Andrew Doria) was a cannon salute fired from Fort Oranje in 1776. Statia’s support of the rebellion ultimately led to war between Great Britain and the island’s Dutch masters, and the British admiral George Rodney sacked the joint with a vengeance in 1781. The island never really recovered from this, but there is still more economic activity than on most Caribbean islands of similar size (about 8 square miles). There is a large oil terminal at the northwest corner of the island and this serves as the transshipment point for most of the oil delivered through out the Lesser Antilles.

Because Statia has more history than Saba there are many more buildings of historical interest, and many of these are well maintained. Even the grounds of the ruined Dutch Reformed Church in the center of Oranjestad are reasonably well groomed, and several graves in the churchyard were festooned with flowers of recent vintage when we visited. But on the whole the island is nowhere near as neat and tidy as Saba, and there is a great deal more of the general low-grade tropical debris and decay commonly found throughout the West Indies. For some reason, we also found an awful lot of conch shells laying about. 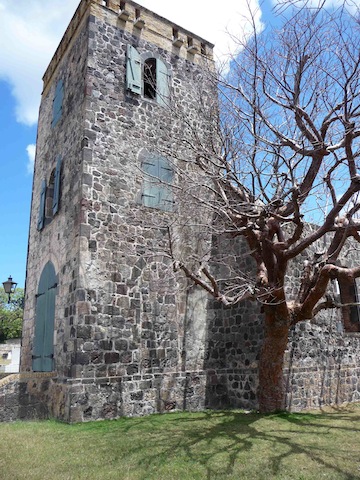 The focal point of our assault on the island was a hike to the top of the Quill, an extinct volcano almost 2,000 feet high that looms over Oranjestad. There is a distinct well-formed crater up there, and the volcano’s name is said to be derived from the Dutch kuil for “pit.” It seemed nowhere near as challenging as Mt. Scenery on Saba, but our excursion still made for an excellent morning’s exercise. The trail wound up through a lush, cool forest, and on the way we encountered a couple of mid-sized snakes, as well as a rather large hermit crab. Chas. and Phil were content to peer over the edge of the crater, but I dragged myself up the very last bit to the tippy top and was rewarded with a fine view in all directions. 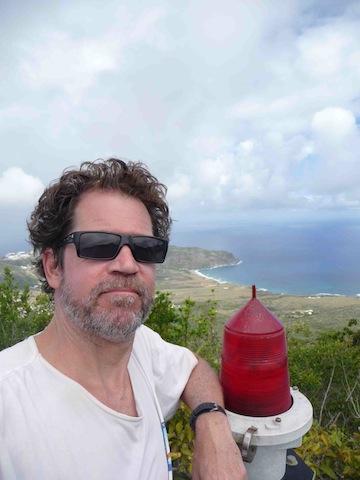 It is possible to hike down to the floor of the crater, but none of us were at all interested in doing that.

Formalities: Are less informal than Saba, but are still not a strain. Though the island is also part of the Netherlands Antilles, you do need to book in if you have come from Saba (or St. Maarten, for that matter). The immigration and harbor office is right at the root of the breakwater in the main harbor.

Language: English works everywhere. I heard very little Dutch. There are many immigrants from other countries and islands here, so you will hear a little bit of everything, including Spanish and Chinese.

Currency: Dollars and euros. I didn’t see any Netherlands Antilles guildens, but they may be accepted here.

Navigation: You need to stay clear of the oil terminal at the north end of the island, especially at night. There is a large orange terminal buoy with a half-mile exclusion zone around it. This buoy is lit, but there are several others related to the terminal that are not. When coming or going also keep an eye on the tanker and barge traffic. Vessels that seem to be moored or stationary may in fact not be.

PS: If you like this post and think I should get paid to write this blog, please click here. The link will lead you to the same post at BoaterMouth, where you’ll find many other blogs about boats.