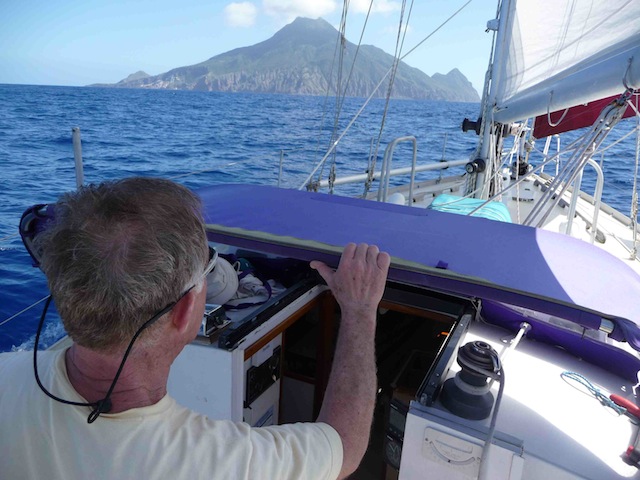 I have long wanted to visit the steep little island of Saba, just 25 miles south of St. Martin, but was always nervous about taking the family, as I’d heard the parking can be tricky and it is hard to get ashore there. But the recent SEMOSA spring cruise with Chas. and Phil presented a perfect opportunity to pay a call. Though Phil had packed a complete wardrobe for schmoozing with the glitterati on St. Bart’s, Chas. and I had little trouble convincing him that Better People would rather go to Saba. Having now been there, I can tell you the parking is not as tricky as I expected, and it is indeed hard to get ashore. It is, however, well worth the trouble.

We had a fine sail over from the north side of St. Martin in a 15-knot easterly and arrived off the western leeward shore of Saba at about 1530 hours. The island is steep to all around and there is nothing like a properly protected natural anchorage or harbor anywhere on the coast. There is a string of eight guest moorings laid out under the high cliffs on the leeward shore in about 50 feet of water. These are well maintained and quite secure, and one is large enough to hold vessels up to 150 tons. There also looks to be one good spot to anchor in 15 to 20 feet in a shallow declivity called Wells Bay near the northwest corner of the island; otherwise you’re anchoring in deep water that is wide open to the north, south, and west. In a normal easterly breeze such as we had, however, things are calm enough in the lee of the cliffs, with little or no rolling.

Fortunately, we found a vacant mooring and soon after picking it up I was off in the dinghy to check out the snorkeling in Wells Bay. It was excellent, unlike most other places I’ve stuck my head underwater over the past several years. The bottom was very dramatic, with lots of pillars and other features (much like the island’s topography above the water), plus there are two tunnels and a cave to explore. I saw a fair amount of live coral, no depressing rubble fields of dead coral, and lots of fish. Besides all the usual suspects, I played with three huge schools of blue tangs, a very shy nurse shark, and two sea turtles. The smaller turtle was quite shy, but the larger, older one was fearless and let me get right in its face for a close inspection.

After a fine night on the mooring basking in bright moonlight, we motored around next morning to Fort Bay at the southern end of the island to try and get ashore. There is now a pair of short breakwaters at Fort Bay shielding a tiny protected harbor. Back in the day the only way to get ashore was to land at the base of the cliff on the west side of the island, at a place called Ladder Bay (or Ladder Point, on some maps), and scale a very steep, precipitous stairway that had been hewn in the rock. Absolutely everything that came on to the island had to be dragged up those stairs. Fort Bay, by comparison, is a piece of cake, but can still be challenging. The harbor proper is too small to receive yachts, so you must moor or anchor outside and dinghy in. The roadstead is wide open to the east, where the wind and waves normally come from, and just picking up a mooring in a garden-variety 20-knot tradewind, we found, can be a semi-exciting experience. Boarding a dinghy is even more exciting. The alternative, of course, is to leave the mothership on the west coast and dinghy all the way around, but in a small tender a good portion the trip will often be wild and wet.

Next challenge: walking the road from Fort Bay to the Bottom, which is the island’s major community. The road is not very long. Indeed, it would be impossible to install a long road anywhere on the island, as it is only two miles across and five square miles in area. From Fort Bay to the Bottom, I reckon, is a little over half a mile. But the road is extremely vertical. The story goes that back in the middle of the 20th century, when people on Saba decided they might like to have a road, their Dutch overseers dispatched engineers to the island, who promptly announced it was not possible to build a road in such a place. So one of the locals took a correspondence course in road building, and the people built themselves a road anyway.

Likewise with the airport. Experts told the Sabans it was impossible to have one, but they didn’t think so. They built themselves an airfield atop some cliffs at the northeast corner of the island, and pilots ever since have been wishing they hadn’t. Landing there has been likened to landing on an aircraft carrier (as you can see in this video clip here), and Yrausquin Airport, as it’s officially known (or SAB in luggage tag lingo), has a reputation for being one of the shortest, most dangerous commercial airfields on planet Earth.

But I was complaining about the road. Between the three of us I estimate we had five heart attacks in just the first 100 yards. And we were struck, of course, by the irony of having to climb so much to reach a place called the Bottom. It’s called that evidently because it’s on the floor of an old volcano crater.

In the end, though, we found our mountain legs, strode proudly into the Bottom, stopped for a beer, and then just kept going. The road between the Bottom and the village on the windward side of the island, which appropriately is called Windwardside, is not nearly as vertical as the road up from Fort Bay. In some places it’s almost level for a few yards, which makes it easier for locals to stop and offer rides. Probably the most exciting part of our entire excursion was three minutes spent in the back of a pick-up truck flying at high speed through a series of switchback corners on the last 200 yards into Windwardside.

This is one of the many charming things about Saba. It is a small enough community, just about 1,500 people, and still just isolated enough, in spite of the airport and yacht moorings, that visitors are treated like guests instead of tourists. The truly amazing thing is that anyone ever settled here in the first place. Many of the current inhabitants are descended from Scottish and Irish miscreants–pirates and convicts and such–and escaped African slaves who came to the island initially looking only for a place to hide from the world. They couldn’t make money growing sugar, as on many other West Indian islands, and instead scratched by however they could. They did a great deal of fishing, mostly on the Saba Bank several miles east of the island. They also built boats (up to 60 tons, I was told) down on the beach at Wells Bay, which isn’t even there half the year (the locals refer to it as the Wandering Beach). And they became great seafarers. Even into the 20th century many Saban men earned their livings abroad crewing on and skippering ships that roamed that world. Allegedly there were several U.S. naval vessels during World War II that were commanded by Sabans masquerading as Americans. Meanwhile, the women these men left behind earned a great reputation for their skilled lacework.

The island today is incredibly neat and tidy compared to most other West Indian islands. Unlike nearby St. Bart’s, which is only neat and tidy because everyone there is rich and white, Saba has a very modest economy and a population that is both quite multi-ethnic and tight-knit. Significantly, most of the locals, both black and white, speak the same Creole patois amongst themselves. Like only a few other places I’ve visited (they are all islands, interestingly), Saba seems to be well run and orderly precisely because its multi-cultural population has an acute sense of the limitations of their environment and understand they must work together to exist comfortably within those limitations. 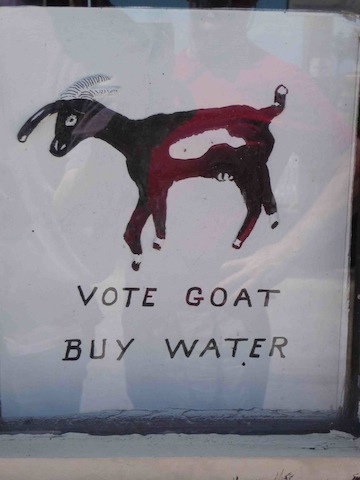 It is a model, I think, the rest of the world would do well to emulate. For that reason alone the island is well worth a visit.

Highest elevation: The aptly named Mt. Scenery rises to 3,084 feet. Allegedly, there is a very steep trail to the top that starts in Windwardside, but I was unable to interest Chas. and Phil in hiking it. The view from the top is purportedly spectacular.

Formalities: Are decidedly informal. The island is Dutch, part of the Netherlands Antilles, and I expected officials here might be as officious as those in Dutch St. Maarten. But folks at the Marine Park Office and the Harbormaster’s Office, both right on the water in Fort Bay, are relaxed and laid back.

Currency: Netherlands Antilles guildens and U.S. Dollars are both accepted, but not Euros. Spend your guildens before you leave, as they are probably worthless elsewhere. I’m not even sure you can spend or exchange them on St. Maarten.

Language: English primarily, though many locals speak Dutch, too. The local patois seems to be an interesting mix of Dutch, English, and African dialects. You’ll understand about a third of it easily.

Navigation: Dead simple for the most part, as the water all around is so deep. There are lots of small moorings for diving and snorkeling that are for day use only. Only the yellow moorings are for overnight use. There are four of these off Fort Bay, but they are further east than you’d expect.

P.S. If you like this post and think I should get paid to write this blog, please click here. The link will take you to the same post at BoaterMouth, where you’ll find many other blogs about boats.