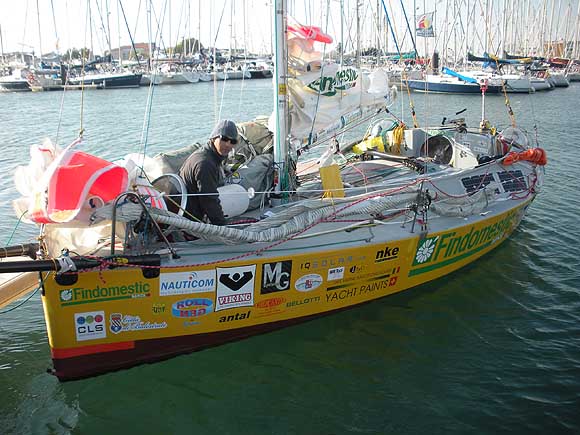 Seems my old acquaintance Alessandro di Benedetto, the crazy Italian guy sailing non-stop around the world on a 21-foot Mini, has run into a spot of trouble approaching Cape Horn. According to some typically brief reports on his website, Alessandro’s boat, Findomestic Banca, was dismasted in “extreme weather conditions” last Tuesday (March 30) off the west coast of Chile. Alessandro originally intended to set up a jury rig and sail into Chile, but now evidently has resolved to continue and finish his voyage under a 20-foot jury mast.

Details at this point are pretty sketchy, but the last news flash on Alessandro’s site affirms that he still has a 9-month supply of food, more than enough to get him back to his starting point in Les Sables d’Olonne, France, and that he is now heading for Cape Horn again.

All I can say is: this guy has serious nerve and deserves a lot more attention than he’s been getting so far. Instead more people seem interested in the exploits of Abby Sunderland and Jessica Watson, the 16-year-old girls currently attempting to sail around the world alone and lock down the dubious and no longer officially recognized by anyone Youngest Around record. Abby, it turns out, succeeded in rounding the Horn just a day after Alessandro was dismasted and is currently about 275 miles northeast of the Falkland Islands. She has been plagued by autopilot problems, but seems to have sorted them out. Now she’s got to get past both the Cape of Good Hope and Cape Leeuwin in what may be deteriorating conditions as the Southern Hemisphere’s winter season starts approaching. 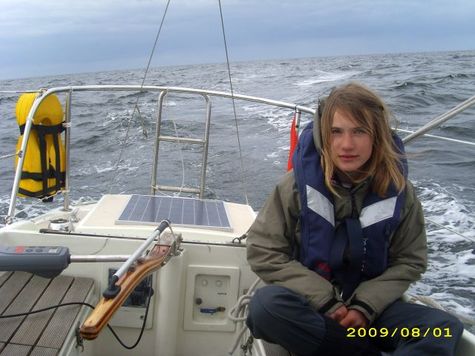 Jessica, meanwhile, is already in the home stretch of her voyage. She expects to pass Cape Leeuwin, at the southwest corner of Australia, this weekend and then need only get to Sydney to at least temporarily claim Youngest Around laurels. She’ll lose them to Abby, if she finishes her voyage, as Abby is a wee bit younger. Abby in turn may well lose her laurels to 14-year-old Laura Dekker, who has at last convinced the Dutch government that she should be allowed to play this game, too. Laura has acquired a bigger boat, a 40-foot Jeanneau Sun Fizz, and is hoping to depart on a two-year circumnavigation this summer. 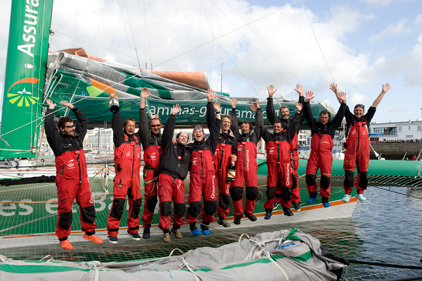 I have also so far failed to note here another important circumnavigation. As of March 22, Franck Cammas and his crew aboard the trimaran Groupama have captured the Jules Verne record for fastest circuit of the globe under sail (48 days, 7 hours, 44 minutes). But I’m sure you knew that already. I spoke with Stan Honey, Groupama‘s navigator, a couple of days ago and was impressed to learn his next exploit will be a long spell of bluewater cruising with his wife Sally aboard their Cal 40. Like any good cruiser, he refuses to say where they might go and how long they might go for. Which is definitely my kind of sailing.

Meanwhile, do keep an eye on Alessandro. He needs all the good wishes you can spare.

PS: If you like this post and think I should get paid to write this blog, please press here. The link will take you to the same post at BoaterMouth, where you’ll find many other blogs about boats.