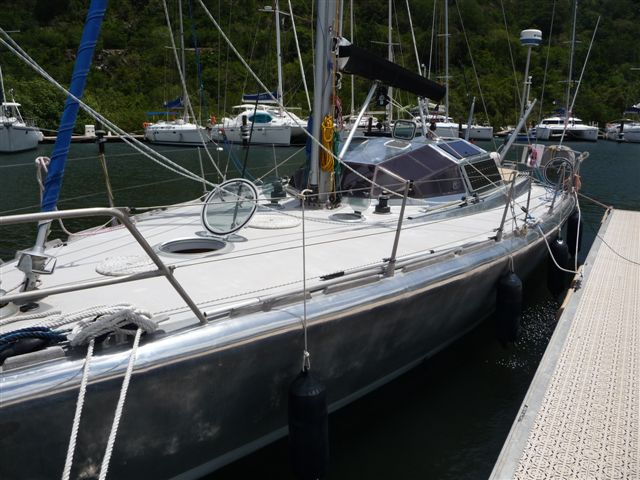 Check out these pix of a very cool boat Chas., Phil, and I found tied up at the reception dock at the Radisson Marina at Anse Marcel in St. Martin the morning after we arrived there. Talk about shiny! At first we were convinced it must be made of stainless steel. I reckon it’s about 40 feet long, and though it looks much like an Open 40, it clearly is intended for cruising. The cutter rig is fairly stout, with an aluminum mast, an in-boom mainsail, and fixed twin backstays. It has short twin rudders with grounding plates at the bottom, which suggests to me it probably has a centerboard that pulls right up into the bilge, as on a sailing dinghy. This is a popular feature found on many French cruising boats, as it makes it possible to dry the boat out or drive it right up on a beach with impunity.

Ultimately, though, I just couldn’t believe anyone would ever build a boat like this out of stainless. First, it would be obscenely expensive; second, especially in a boat this size, it would be way too heavy to sail very well. Bernard Moitessier, who helped launch the French craze for metal cruising boats back when he built his steel ketch Joshua in the early 1960s, once wrote (after concluding that having to constantly paint a boat is in fact a real pain in the ass) that his perfect boat would be constructed of stainless steel. But I seriously doubt anyone feels that way anymore. You’d have to be very bent to spend so much money building such a slow, heavy boat.

When I went back to snap these photos some hatches were open and I noticed the metal inside was clearly aluminum, as you can see here: 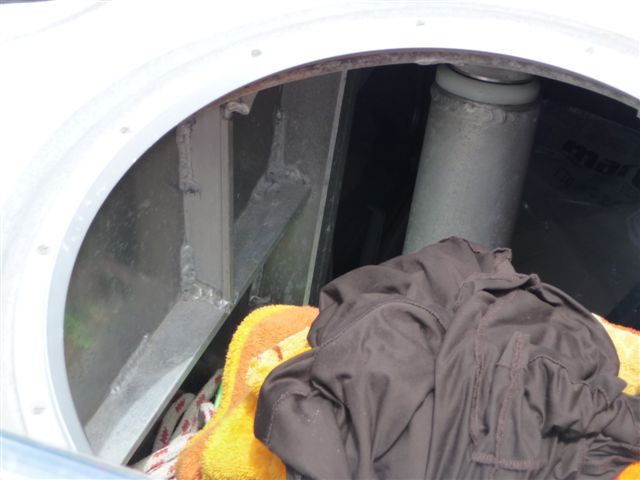 Then the owner showed up, and though he spoke no English and I speak only wretched French, I did ascertain the boat is in fact polished aluminum. Which is an expensive enough proposition in itself. I’ve seen small polished aluminum parts on fancy cars and motorcycles, but never anything this big. The owner said (I think) that the boat is 12 years old and has sailed 65,000 miles, so the polished metal is obviously holding up pretty well. 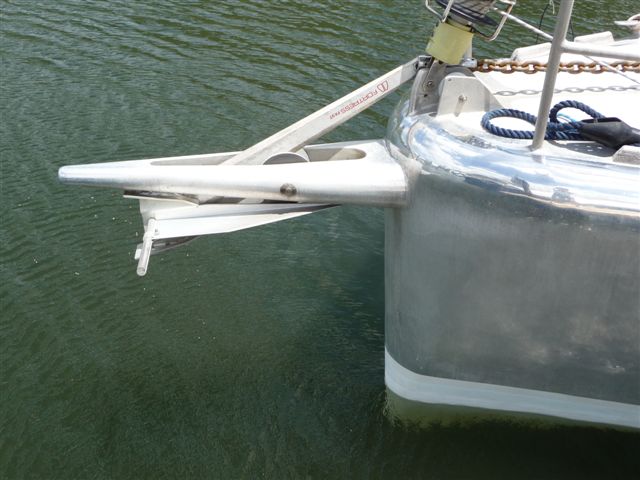 A real weapon of a bowsprit with an integral anchor roller. But why not fly sails from it??? 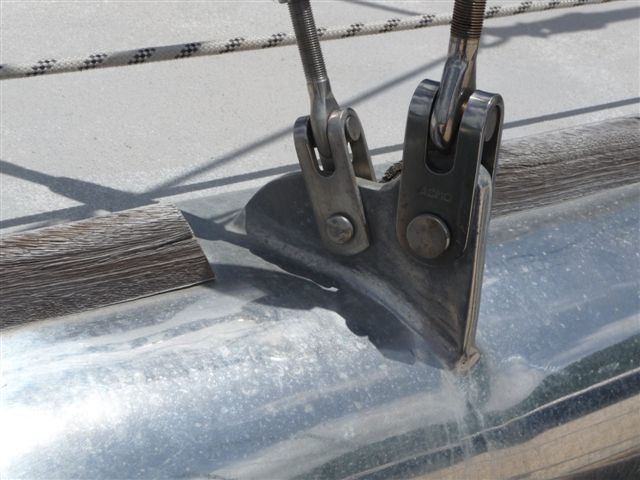 Even the chainplates look sexy! 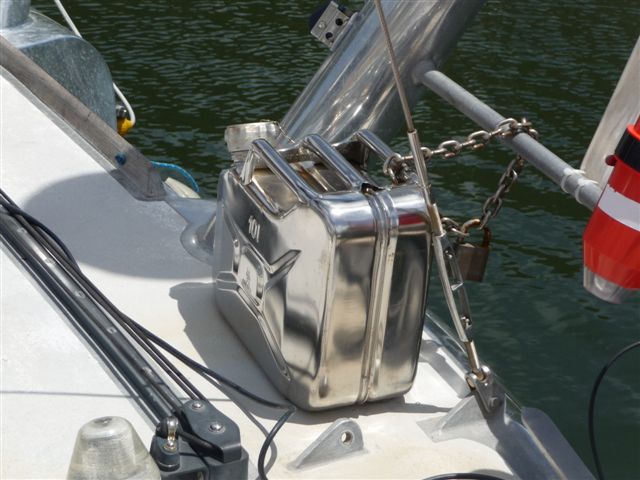 This little jerry can may in fact be stainless steel… 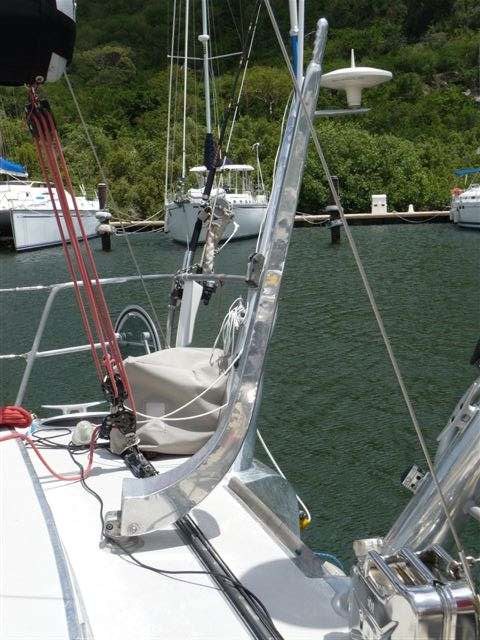 But I reckon this killer tiller must be aluminum. 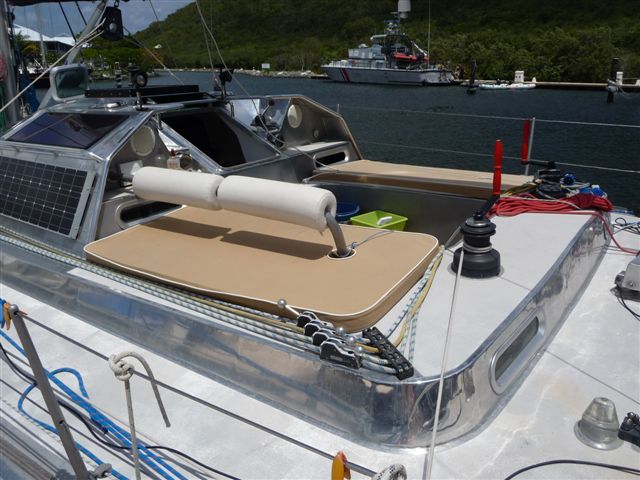 The cockpit is very exposed. Note the removable backrest, which can be tacked back and forth. 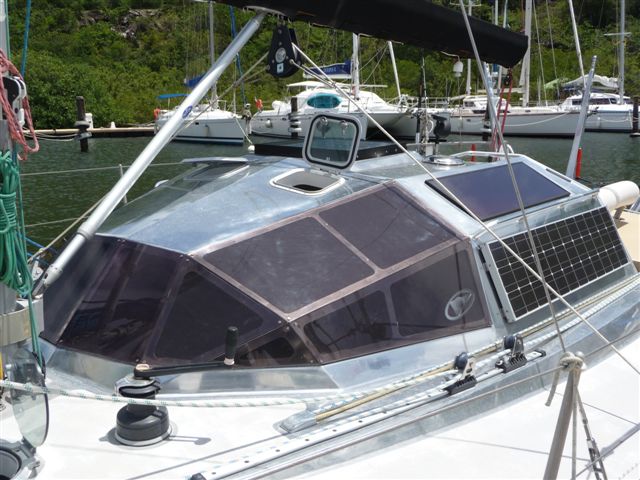 The only name I saw on the boat was Sea Space, but I can’t say if it’s the boat’s name or the builder’s. The home port is St. Malo. Anyone who can tell me more about it should drop a line.

PS: If you like this post and think I should get paid to write this blog, please click here. The link will take you to the same post at BoaterMouth, where you’ll find many other blogs about boats.