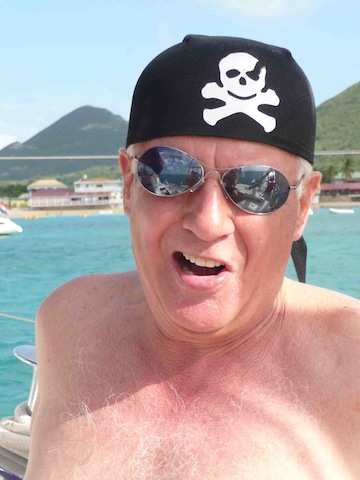 The first annual SEMOSA Winter Cruise aboard Lunacy was unfortunately cancelled due to the death of my mother, but we were able to schedule a Spring Cruise in its place. Participants included myself, Phil “Snake Wake” Cavanaugh, and Chas. “May I Cast Off Now?” Lassen (pictured above). Regrettably, Martin “The Geek” Hansmann, who had signed on for the earlier event, was unable to attend the later one.

I should explain about SEMOSA. The acronym stands for South End Men’s Ocean Sailing Association, and its emblem, an S contained within the biological symbol denoting the male sex, was devised by Mr. Lassen during a passage south aboard Lunacy the year before last. In but a short period of time, the organization has become an exemplar of civic virtue and sportsmanship in the South End of Portsmouth, New Hampshire, where most members reside. SEMOSA bumper stickers and flags are commonly displayed through out the neighborhood, much to the amusement of our wives, who insist the club emblem looks like a logo for a sperm bank. We hoped to capitalize on this during our cruise and displayed the club flag whenever possible, but, alas, were approached by no women soliciting donations.

In most other respects, the cruise was a great success. We had an embarrassing start, as I demonstrated to Chas. and Phil how to convert a breast line to a spring line while powering out of a Euro-style Med moor at the Radisson Marina in St. Martin, and sadly laid poor Lunacy directly athwart our exit route. Fortunately no one was watching, the cross breeze was light, and we managed to extricate ourselves without damaging Lunacy or any other boats. Once free of the dock we visited Saba and St. Eustatius, two islands I’d never been to before, and also Ile de Fourche, which I described briefly in my last Caribbean cruising post. Look for more particulars here on WaveTrain over the next few days. 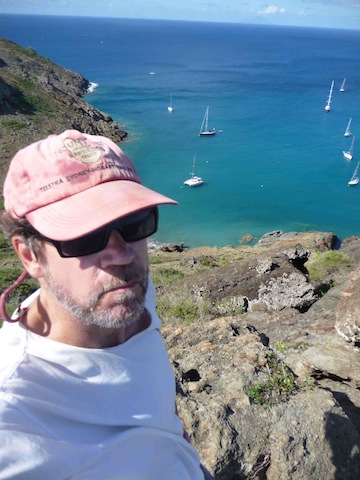 Besides drinking a bit too much rum, during our cruise we engaged in several speculative discussions about yacht design and helped Chas. sketch out a proposal for a radical new shoal-draft performance cruiser he thought might work well around Portsmouth. There’s really nothing more fun than encouraging a good friend to drop a big bundle on a cool new boat you hopefully will get to go sailing on. In the end, however, Chas. came to his senses and decided what he really should do is perhaps modify his 18-foot Menger catboat by adding new foils and a carbon rig. This in itself was deemed a worthy project.

Helping out Phil was more of a challenge. His wife Meg had expressed a fervent hope prior to his departure that he would return a better person, and Chas. and I were determined to help him achieve this goal. This is one of SEMOSA’s core functions. Men helping other men realize their true potential without chanting, beating on drums, or otherwise degrading themselves is, we believe, one of many laudable benefits of cruising under sail. By the end of our cruise Chas. and I were so pleased with Phil’s progress we presented him with a certificate documenting his improved personhood. With any luck this will convince Meg to let him sail with us again in the future. 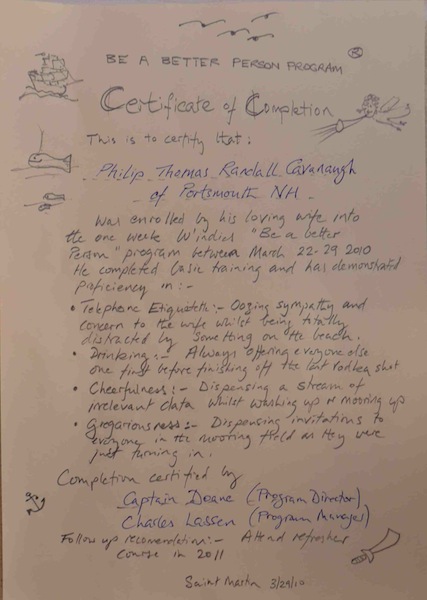 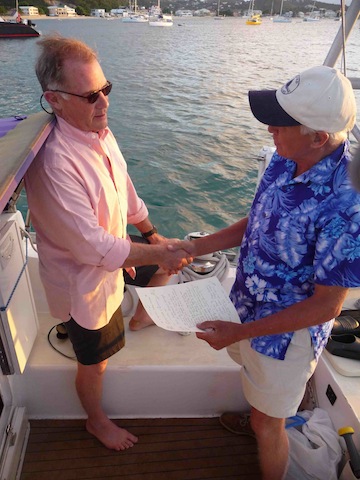 Immediately after the presentation we headed ashore and enjoyed a fine meal at Le Pressoir, one of many superb restaurants located at Grand Case in St. Martin. On the advice of our better selves we drank wine there instead of rum.

PS: If you like this post and think I should get paid for writing this blog, please click here. The link will take you to the same post at BoaterMouth, where you’ll find many other blogs about boats.