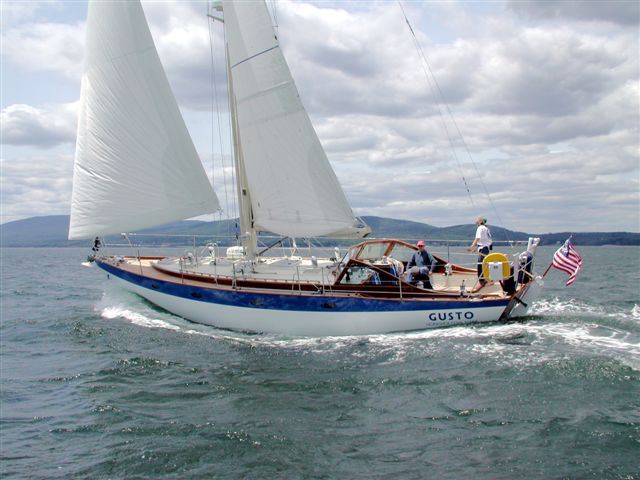 Aside from its displacement, which we discussed before, another important factor to refer to when evaluating a boat is its length. We usually think first of a boat’s length overall (LOA), but when it comes to sussing out a boat’s performance potential, the more relevant measurement is actually the load waterline length (LWL). This refers to the horizontal length of a hull at the water’s surface when a boat is carrying a normal load. All other things being equal, this is the single most determinative factor in establishing how fast a boat can ultimately go.

As a very general rule the maximum speed of any displacement hull–commonly called its hull speed–is governed by a simple formula: hull speed in knots equals 1.34 times the square root of the waterline length in feet (HS = 1.34 x √LWL). Thus, for example, if you have a 35-foot boat with a waterline length of 28 feet, its hull speed works out to a little over 7 knots (1.34 x √28 = 7.09).

To understand why this is and where this mysterious multiplier of 1.34 comes from, you first need to understand that the term “displacement hull” refers to a hull that travels through the water rather than on top of it. Because such a hull displaces significant amounts of water as it moves along, it inevitably creates two series of waves in so doing–one at the bow and another at the stern. These waves are governed by a law of natural physics, which states that the speed of a series of waves in knots equals 1.34 times the square root of their wavelength, which is the distance in feet between the wave crests (WS = 1.34 x √WL).

Inherent to this formula is the fact that wavelengths increase (and, of course, the waves themselves get larger) as waves move faster. This is where the relationship to boat speed comes in. The bow waves created by a boat necessarily travel at the same speed as the boat. At lower speeds, the wavelengths between the waves are shorter, such that there is room for multiple cycles of waves to pass down the length of the boat before meeting the stern wave. As the boat speed and wave speed increase, however, eventually a point is reached where the wavelength is equal to the boat’s length and the bow-wave cycle and stern-wave cycle will have merged. There is then only room for one cycle of the bow wave before it meets the stern wave. This is what happens once a boat achieves its hull speed. Up top you see a nice photo of a very nice full-keel sailboat (a Chuck Paine design, actually) moving along at hull speed, and you can plainly see the bow and stern wave with one long trough running the length of the hull.

What has happened is that the boat has dug itself a hole. If the boat maintains hull speed, its bow and stern are well supported by their respective waves and it can continue moving forward efficiently. But if it tries to go faster and the stern wave is pulled further aft by the lengthening trough of the bow wave, the back of the boat falls into the hole, and the boat is left trying to climb up the hill presented by its own bow wave, which by now is relatively large. From this point forward, disproportionately larger increases in power are needed to achieve ever smaller increases in speed.

From a mathematical point of view it is easy to see what has happened. The two formulae described above have become exactly the same, as the values for waterline length and wavelength are now identical, as are the values for hull speed and wave speed. Note that one interesting (though not particularly useful) corollary of this relationship is that you can theoretically measure a boat’s speed by simply measuring the distance between the waves it creates.  For example, if the distance between waves generated by a boat is 15 feet, the boat that generated them must be traveling almost 5.2 knots (1.34 x √15 = 5.189).

This all seems very tidy, but in fact the concept of hull speed is viewed skeptically by many yacht designers. “It’s total bullshit,” is how one designer friend of mine, Jay Paris, puts it. For in reality many boats, even those with honest-to-God displacement hulls, can easily exceed their nominal hull speeds.

One reason this happens is that a boat’s effective waterline length will often increase as it goes faster, particularly if it has long overhangs, and thus its speed potential under the formula will necessarily increase. Another reason this happens is that a boat’s stern can be designed to significantly suppress its stern wave, which helps to make the hole created by the wave trough when traveling at speed smaller, and also to increase buoyancy aft, which helps keep the stern from falling into the hole in the first place. Stern sections capable of doing this have overhangs that exit the water at a steep angle, usually 15 degrees or less (this helps suppress the stern wave), and are beamy with lots of increased volume aft (which increases flotation).

If a boat with a stern like this is relatively light and has a flat, shallow hull, it will also be very capable of getting on top of the water and planing when conditions are right, in which case it ceases–temporarily, at least–to have a displacement hull and may exceed its nominal hull speed by a very large margin. Indeed, many lighter-displacement boats with flat bottoms are capable of planing to some extent, regardless of how their sterns are configured. And even quite heavy boats with narrow sterns and lots of deadrise in their hulls will sometimes experience extremely gratifying surges over hull speed when plunging down large wave faces as they sail downwind in strong seas.

So the bottom line is that a boat’s hull speed is not necessarily its actual maximum potential speed. Probably it is more accurate to say that hull speed represents a minimum maximum figure. It still provides a useful rough estimate of how fast you can reasonably expect a boat to go, particularly if you bear in mind that sailboats, particularly cruising sailboats, are rarely traveling at top speed in any event.

Note that this discussion applies only to monohulls. There is in fact a good way to estimate the top potential speed of a multihull (and a more accurate way to do it for monohulls), but we have to wait until after we learn about displacement/length ratios to use it. This will be the subject of our next Crunching Numbers post.

PS: If you like this post and think I should be paid something for writing this blog, please press here. The link will lead you to the same post at BoaterMouth, where you will find many other blogs about boats.