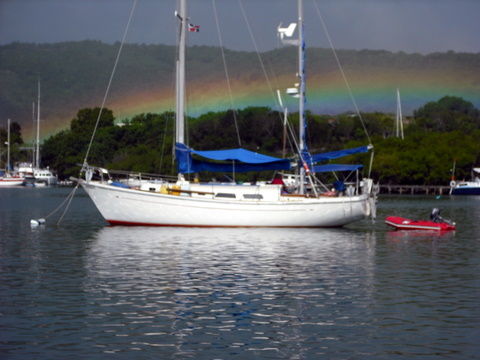 The Princess 36, built by the long defunct Allied Boat Company up the Hudson River in Catskill, New York, is a robust character ketch that does not pretend to be anything other than a simple, comfortable cruising boat. In truth, it is a boat only a cruiser could love. Designed by Arthur Edmunds and first introduced in 1972, the Princess enjoyed a 10-year production run during which about 140 hulls were built, which likely makes it the most successful boat produced by Allied during its 22 years of existence (1962-84).

Of all the boats Allied built–including the Luders 33, sailed by the famous boy-cruiser Robin Lee Graham; the Seawind 30, first fiberglass boat to circumnavigate; and the Seabreeze 35, a very handy CCA cruiser-racer–the Princess is the one that still commands the most loyal following among modern cruising sailors.

Though the Princess is undeniably a chunky craft, it is not unattractive. Its somewhat exaggerated sheer line leads up to a high bow, but blends nicely with its moderate overhangs and shoal-draft cutaway full keel. The boat’s performance under sail, though decidely unspectacular, is smooth and steady. The Princess is a bit beamy for a vessel of its vintage, and this combined with the shallow keel and modestly sized ketch rig makes it slow to windward. Reportedly a dozen boats were built with deeper keels (5’1” instead of 4’6”), as were a few sloop- and cutter-rigged boats, and all these should be faster and/or more close-winded than the standard boats.

A ketch-rigged Princess will sail best on a reach, particularly if a mizzen staysail is set between the masts. The long keel tracks well, the ketch rig is easy to balance, and many owners report that this, together with the non-reversing worm-gear steering found on most Princesses, makes it very easy to leave the helm unattended for long periods. The boat is also said to be a bit tender intially, though it rarely buries its rail, and otherwise has a comfortable motion in a seaway.

As with all boats built by Allied, construction is very strong and simple. The Princess hull is solid handlaid fiberglass–24-ounce woven roving and mat with a surface layer of cloth under the gelcoat–with thicker laminate at the turn of the bilge and down low around the keel.  The ballast is lead, glassed over and encapsulated within the keel.  The deck is balsa-cored. All bulkheads are tabbed directly to the hull. The rudder stock, impressively, is bronze.

The only inherently suspect bit is the deck joint, which consists of an outward-turned flange that may be susceptible to damage in relatively minor collisions. The joint itself is durable enough–bedded in sealant, through-bolted on 5-inch centers, then glassed over–and is covered by an extruded aluminum rubrail. But still its exposed position may sometimes cause testicles to shrivel while maneuvering at close quarters around docks and other obstacles. The upside is the joint is that it is easy to access for repairs, though replacing any part of the rubrail with an identical extrusion will likely be difficult to impossible.

Though well built, early Princesses were disadvantaged in terms of systems. The heart of the original electrical system consisted of one woefully inadequate 60-amp battery, which later was increased to 90 amps. Battery capacity on most boats, it is safe to say, will have been upgraded by owners over the years, and installation quality will inevitably vary. On the very best boats all wiring and panels will have been professionally replaced.

Similarly, the original engine, a 25-hp Westerbeke diesel, was not strong enough to power the Princess at any speed through head seas. It was later replaced with a larger 40-hp engine. Look for at least 40 horses on any repowered boats. The fuel tank, meanwhile, located under the cockpit, was originally made of black iron and often corroded over time, though later tanks were built in Corten steel. In most cases the large stainless-steel water tanks, buried in the bilge of the boat, have lasted much longer.

For a boat of its size and era, the Princess has a very roomy interior with standing headroom well over 6 feet. There are at least four different accomodation plans, each with a good-sized V-berth up forward, with a head behind it to port and drawers and a hanging locker to starboard. All major variations were imposed aft of the main saloon bulkhead. Some boats have collapsible dinette tables (always to port), some have fold-down centerline bulkhead tables, some have smaller or larger galleys (always aft to starboard), some have single quarterberths aft to port, and some have small enclosed quarter-cabins with double berths instead.

The quarter-cabins, though quite cramped, usually have cut-outs in their forward bulkheads to create a sense of space and improve ventilation. The quarterberths to my mind are superior, however, as they also allow space for a modest nav desk. The larger galleys, meanwhile, steal space from the starboard-side settee, rendering it unusable as a berth. Earlier boats have no deck hatch in the main saloon, though later boats do. Which variation works best will depend on how many people one wants to cruise with and how they are related to each other.

Most cruising couples, I suspect, will likely find all the accommodation plans work well enough and should probably be more concerned about what systems upgrades have already been performed. As for aesthetics, the quality of the interior joinery is no better than average. Allied instead preferred to focus resources on basic construction quality, which is not a bad thing. The most salient point is that prior to 1979 the interior finish featured lots of faux-wood Formica veneer. Subsequent to 1979 natural wood was used, which looks much better, though it does require more maintenance.

The Princess, thanks to its shoal-draft keel, is a near-perfect low-budget family cruising boat for skinny-water cruising grounds like Chesapeake Bay, the Florida Keys, or the Bahamas. It will serve admirably, too, as a coastal cruiser in any deep-water locale, as long as you aren’t too worried about getting places in a hurry. With its stout construction and easy motion it is also a good candidate for bluewater cruising. It may be wise, however, to increase fuel capacity, as the boat sails poorly in light air, and also to enlarge the cockpit drains. These are a bit small on some boats, and the cockpit is quite large.

PS: If you like this post and think I should get paid something for writing this blog, please click here. The link leads to the same post at BoaterMouth, where you’ll find lots of other blogs about boats.