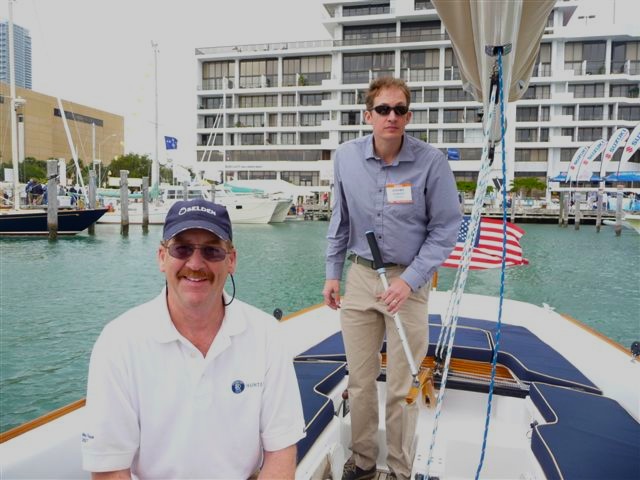 One of the highlights of my recent trip to Miami was getting to meet Jeremy Wurmfeld, a young, personable designer who is co-founder (with Robbie Doyle of Doyle Sails) of e Sailing Yachts. I was hoping to sail with Jeremy aboard his e33, the sweet-looking daysailer he and Robbie introduced a few years back, but at first he demurred. He’d just returned from taking a group of five neophyte show-goers out for a hair-raising spin in quite blustery conditions and wasn’t anxious to head out again.

Fortunately, I spied Steve Pettengill loitering about nearby. Just the man to have aboard when conditions are dicey! I at once press-ganged him into joining us and assured Jeremy all would be fine. But as we cast off lines and nosed out of the marina, Jeremy (seen on the right above) seemed puzzled and asked who Steve (on the left) was. I might have explained about the solo round-the-world racing career, or about the time he flipped a trimaran off Cape Horn, etc., etc., but instead I cited Steve’s current job title. “He’s Director of Destructive Testing for Hunter Marine,” I answered enthusiastically. Jeremy, to his credit, did not look (too) alarmed.

The last time I’d sailed with Steve was at the Heineken Regatta in St. Maarten almost 10 years ago. The first day of the regatta we were aboard a big maxi that blew up three spinnakers rounding the windward mark at the top of the course. Next day we raced on a 250-foot square-rigger that lost its top hamper and a big sheetblock soon after the start. The third day no one invited us to crew for them.

Fortunately for Jeremy, we had better luck this time. It says something for the e33 that in spite of its generously sized sail plan (no, Virginia, we did not reef down) and the 25-knot gusts barreling out of the south and the shoal water in which we twice ran hard aground at full speed, the boat was returned to its slip unharmed and in perfect condition. 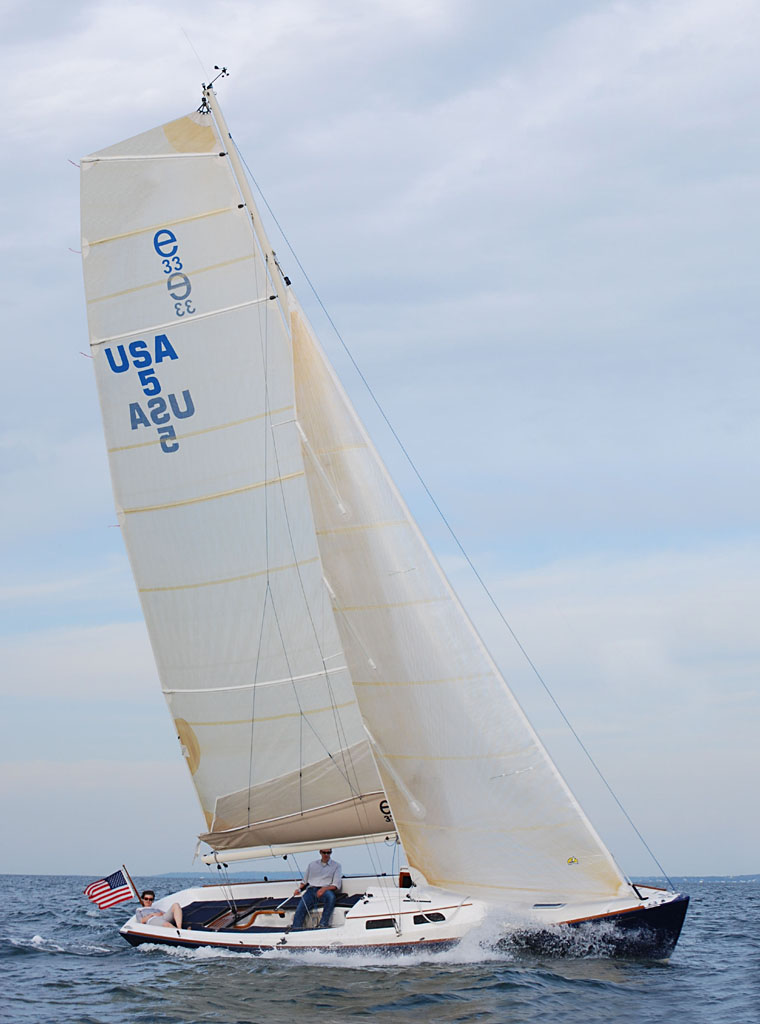 To tell you the truth, I was a bit nervous about that sail plan. With its big square-headed main the e33’s rig both looks and is somewhat enormous. But the rig is fractional, so the top of the carbon mast, which has no backstay supporting it, can flex off a bit. The top of the square-head sail can also lean back and de-power itself, all of which helps the boat roll with the punches when big gusts come through. 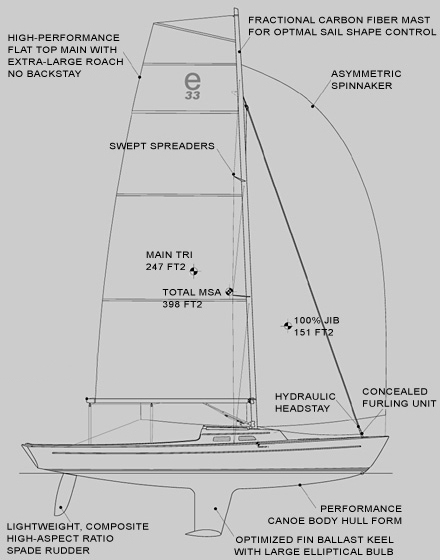 Besides having a powerful rig, the e33 is also fairly light, which makes it more performance-oriented than most other high-end daysailers. We had no trouble keeping our speed over 7 knots during our sail. Had we reefed, frankly, we probably would have done better than that. The speed, however, does not come at the cost of complexity. Line handling is relatively simple and uncomplicated. No winches are needed to manage the sheets (the one winch on our boat is for hoisting crew aloft on a halyard if need be), and an asymmetric spinnaker can be easily flown from the bow, as there is plenty of space between the stem and the forestay.

The standard keel, which draws 5’8″, is a bit deep (as we learned) for places like Biscayne Bay. But there is also a shoal draft keel available, which draws just 4’8″. According to Jeremy, he was so surprised by how well this performs he is now considering offering a third even shallower “super shoal” keel.

The best feature of the e33, beyond its elegant good looks, is the super-sized cockpit. Nearly half the boat’s overall length is devoted to cockpit space, which means there’s plenty of room for folks to hang out, whether they’re helping to sail the boat or not. We had five aboard during our sail and could easily have carried as many more had we wanted. There’s lots of room aft for people to sprawl and sunbathe on the lazarette, and the tiller is just forward enough that the helmsman (with some help from a tiller extension) should just be able to reach the jib sheets on the coachroof and sail the boat singlehanded.

Though it is a fabulous daysailer and should also be great fun to race, the e33 doesn’t make much of a cruising boat. There are two berth-sized settees below, plus a small kid-sized V-berth, and little else other than a drinks cooler that doubles as a companionway step and a toilet stashed under a locker lid. Good enough for an overnight, I’d say, but even a long weekend aboard might be a stretch for some. 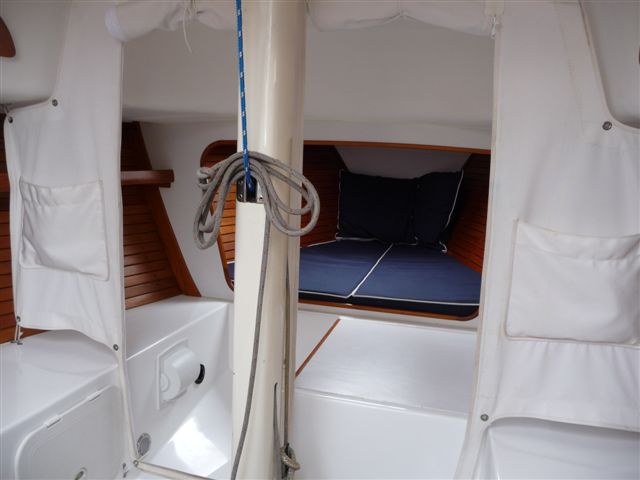 Not to worry, though. There is an e44 in the works that will have plenty of living space below, plus a new e27 that has already generated a lot of interest among the daysailing crowd. With any luck Steve and I may get to sail one of these in Miami next year.