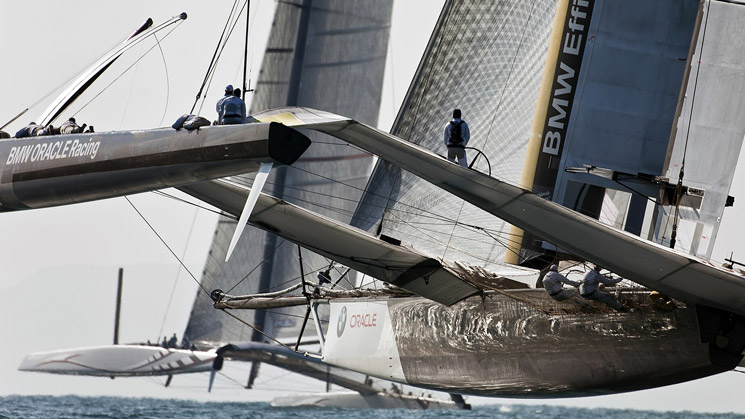 0Shares
I am back from Miami and have lots to share with you, but first we should wrap up the AC coverage. As predicted here on WaveTrain, Larry “the Oracle” Ellison has crushed Ernie “the Alinghi” Bertarelli 2-zip in the best-of-three series. The first race didn’t get sailed until Friday morning ET (our hero intended to file a gear post at that time, but instead watched the race on his laptop in the boat show press room), and the second race only got off yesterday after the Principal Race Officer Harold Bennett reportedly quelled a mutiny aboard the committee boat (big kudos to Scuttlebutt’s Cory Friedman on that mega-scoop). But the outcome was never in doubt. Ernie and his cat were little more than bullet-riddled corpses by the time it was all over.

If you’d like a blow-by-blow account of the action, I urge you to check out my colleague Kimball Livingston at Blue Planet Times or BoaterMouth. Or watch the video replays at ESPN360. The running commentary by AC perennial Gary Jobson and multihull maven Randy Smyth was truly superb. But if you want some useless opinions on the fate of the Cup, stay tuned… 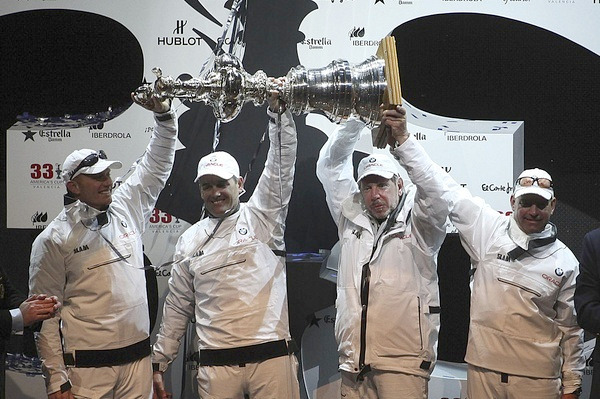 1) The boats are fantastic! They are, quite literally, the fastest, most advanced sailing machines on the planet and are exactly the sort of vessels God intended America’s Cup racing to be conducted in. To go back to skinny monohulls that sail only a third as fast would be like returning the gift of fire to Prometheus. Future races should be conducted in similar vessels, with the proviso that stored power should be banned. The only good reason not to race boats like this in sailing’s premiere event is if there are not enough billionaires around to build them.

2) The next venue should be San Francisco. I want to see 90-foot multihulls screaming around the bay in a 25-knot breeze. Surely this would not be like watching grass grow. I gather there is talk that Larry may take the Cup back to Newport, Rhode Island, where he recently bought himself a Very Large House, but if I were the Golden Gate Yacht Club, I’d for sure want the next event held within view of the Golden Gate. Otherwise they should just go ahead and change their name to the Larry Ellison Yacht Club.

3) The trustee who controls the Cup should be independent. As I’ve said before, it is a legal oxymoron to have the Defender serve as a fiduciary trustee who must both compete for the Cup and serve the best interests of those competing against him. Larry reportedly said he would turn over management of the Cup to an independent entity if he succeeded in winning it. If this is true, now’s the time for him to man up and keep his word. If it’s not, he should do it anyway.

Of course, the odds are very good that Larry, like Ernie before him, will now lose his mind and start thinking he owns the Cup. If this happens, those who actually do own the Cup–i.e., the beneficiaries of the public trust created by the Deed of Gift, which includes all AC fans, plus those who aspire to compete for the Cup–should petition the New York court to reform the terms of the trust and appoint an independent trustee. I am sure the judges in New York would love to put an end to future AC litigation, and this would be the best way to do it.