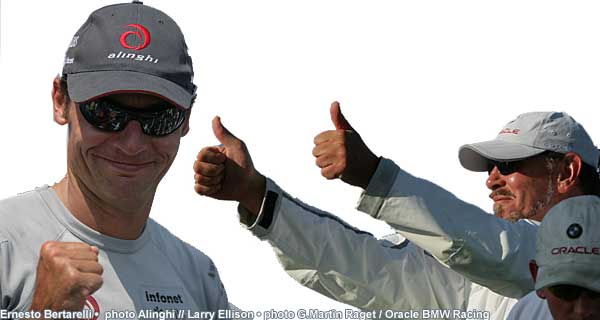 Get ready to set your alarm clocks, sports fans. The good news is you will (finally!) be able to watch Race One of the Great AC Showdown live via the Internet at ESPN360.com next Monday. The bad news is you’ll have to get up at 0-dark-hundred (3:45 a.m.) to do it. If you’re too lazy to manage this, I’ll save you some trouble and make a bold prediction: Larry is going to take Ernie down in two straight races.

Since I last pontificated on this subject, there have been numerous developments, most of which cut in Larry’s favor. The most important of these is that the two DOGzilla multihulls have both been sailing off Valencia, sometimes simultaneously, in preparation for the event, and the consensus of independent observers seems to be that USA (as the BMW Oracle boat is now known) is faster than Alinghi 5. The best source of info on this is a Sailing Anarchy contributor known as “Malvarossa Beach,” who runs a boat brokerage and charter company in Valencia and has been out observing and pacing the two boats whenever possible. MB, as he is referred to on the Anarchy site, has been titillating readers on Anarchy’s very active Valencia in Motion discussion thread with detailed reports, photos, and video. MB has noted that USA not only seems faster and more maneuverable than Alinghi 5, but is also more comfortable in breezes over 10 knots. 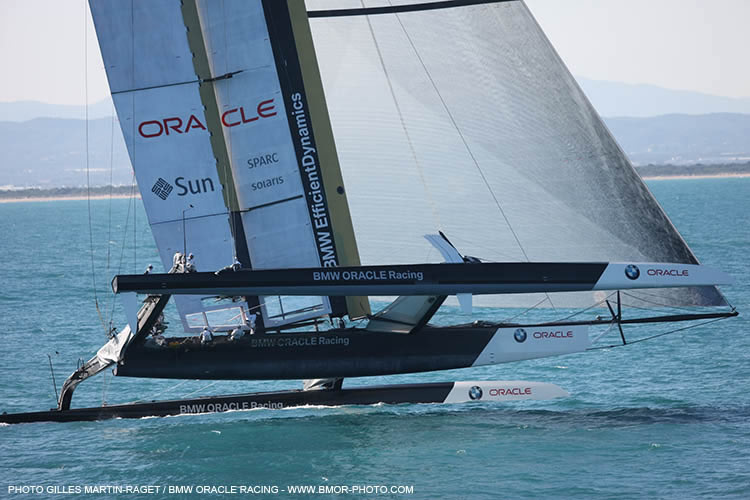 Which brings us to the next most important development in Larry’s favor: the International Jury appointed to preside over the event ruled yesterday that the Race Committee, not Ernie, gets to decide when conditions are suitable for racing. This means Ernie won’t be able to ensure that Alinghi 5 is competing only in the light air she likes best. Other lesser IJ decisions in Larry’s favor include a ruling that he can use some fancy gook to reduce skin friction on USA’s hulls; he can also use his fancy new $150,000 wind detector to read shifts up to a kilometer away while racing.

Another development I think cuts in Larry’s favor is that the New York court presiding over the various ongoing AC lawsuits has decided that it won’t rule until after the race on Larry’s motion to disallow Ernie’s sails on the grounds they were not made in Switzerland. Which means Larry has an ace in the hole! Even if he loses, he can maybe get Ernie disqualified ex post facto or at least angle for a do-over, with Ernie forced to use inferior sails.

Finally, here’s a titillating bit of news that came in this morning: Ernie has announced he’ll be steering Alinghi 5 come Monday. My guess is Ernie wants to drive not because he thinks it will improve his chances of winning, but because he’s getting severely pessimistic and figures this is the only way he’ll ever get his money’s worth out of this mess.

Certainly, given all the above, anyone in their right mind would rather be Larry than Ernie going into this thing. (Hence the bold prediction.) But that doesn’t mean there still won’t be some big surprises once the starting gun fires. Nothing like this has ever happened before. No one has ever tried to race boats this powerful on an around-the-buoys course. Major carnage and mayhem are still a distinct possibility.

Even now, as your eyeballs scan this page, everyone who’s anyone in the world of sailing is jetting into Valencia to catch the action. Ironically, though, a ringside seat in Valencia may not be the best vantage point. There’s a good chance the DOGzilla boats won’t be get very close to each other while racing (they may even be out of sight of each other at times), and unless you’re in a chase boat that can hit 30 knots or better, odds are you wouldn’t be able to get very close to either boat in any event. Very probably the best place on earth to watch this DOGfight will be in bed with a computer on your lap and a hot cup of Joe in your hand. 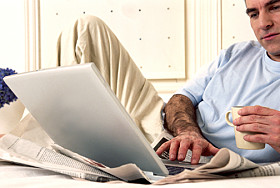 Don’t you just love the Internet???