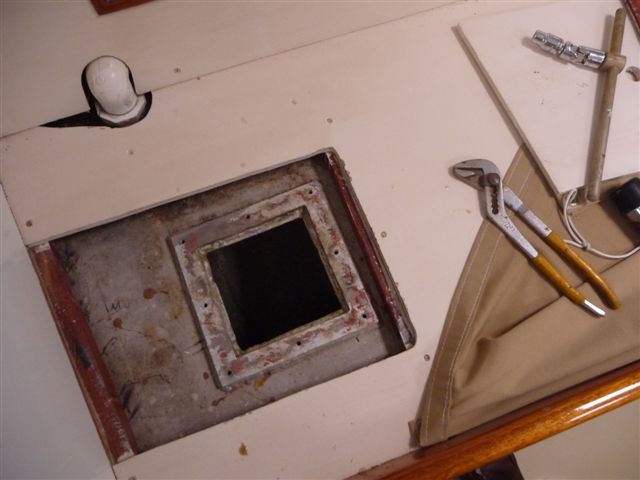 While sailing Lunacy south in the fall of ’08 my crew and I noticed there was some white sandy grit in the fresh water running out the taps when the boat was sailing in rough weather. The operative theory at the time was that this crud was just what it appeared to be: sand. We reckoned at some point in the boat’s long cruising career (including a westabout circumnavigation), some sandy water had been taken aboard in some remote tropical port, and that the sand had settled to the bottom of the tank, where it sometimes it gets stirred up when things are bouncy onboard.

Before bringing Lunacy south again last fall, I decided to open up all three water tanks and hopefully remove the sand. Cracking open the fuel tank (which had been part of the summer’s ongoing engine drama) had been a major production, as some joinery first had to be removed to access the inspection plate. But opening the water tanks was easy. The inspection plates are under the settees and nav seat in the main saloon, with access hatches right over them.

I was a bit mystified by what I found inside. The walls of the aluminum tanks were bright and clean, but there was indeed a build-up of crud at the bottom of each V-shaped tank–a bit of brown schmutz, plus (as expected) an accumulation of what appeared to be sand. But was it sand??? Though the tank walls looked good, I noticed the welds looked a wee bit grotty, and when I ran my finger along them I felt they had a slightly granular texture. I wondered: could this “sand” be the result of some sort of corrosion that was attacking the welds? 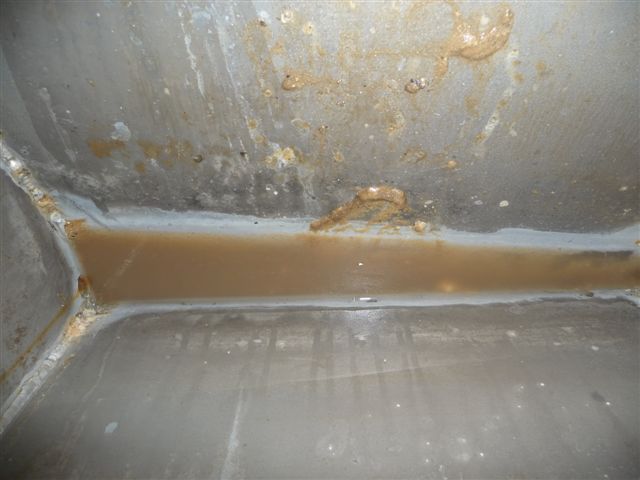 Cleaning out the tanks was easy. They are well designed, with the lowest point in each tank right under its inspection plate, so flushing out the channel under the baffles and then vacuuming out all the crud was quick work. Since then, in spite of having sailed in some very rough conditions, we’ve seen no more sand in the tap water.

Meanwhile, I’ve been researching the corrosion question. Evidently it is possible that my sand was a by-product of corrosion caused by the tank interiors coming in contact with chlorinated water. And apparently my sand has a name: aluminum chloride hydrate. Fortunately, I am told it is not toxic. Though the Wikipedia entry on aluminum chloride is somewhat confusing and alarming, you’ll note at the end that “hydrated salts” are described as not being “problematic.”

I have never treated the water on Lunacy with chlorine, as many cruisers do, because I have always assumed that chlorine cannot be good for aluminum. I have no idea what Bob, the boat’s previous owner, did (note to self: bug Bob about this next you see him!), but it is perfectly possible that the boat has many times taken on chlorinated municipal water in various locales. I guess all I can do for now is keep opening the tanks on a regular basis to clean out the crud and inspect the welds. Though they felt a little gritty, they all looked good, with no noticeable loss of material. Hopefully I’m a long ways yet from having to worry about any of the tanks leaking.

Finally, an IMPORTANT STYLISTIC NOTE: you’ll notice that today’s headline is not ALL CAPS, as in the past. Sadly, several of my fellow journalists at BoaterMouth, where WaveTrain is syndicated, are offended by this practice. Am I alone in thinking ALL-CAP HEADS look better on blog posts??? If you like ALL-CAP HEADS, too, I urge you to roam the blogs on BoaterMouth and lobby the writers there to switch over. Meanwhile, I’m going with the flow.